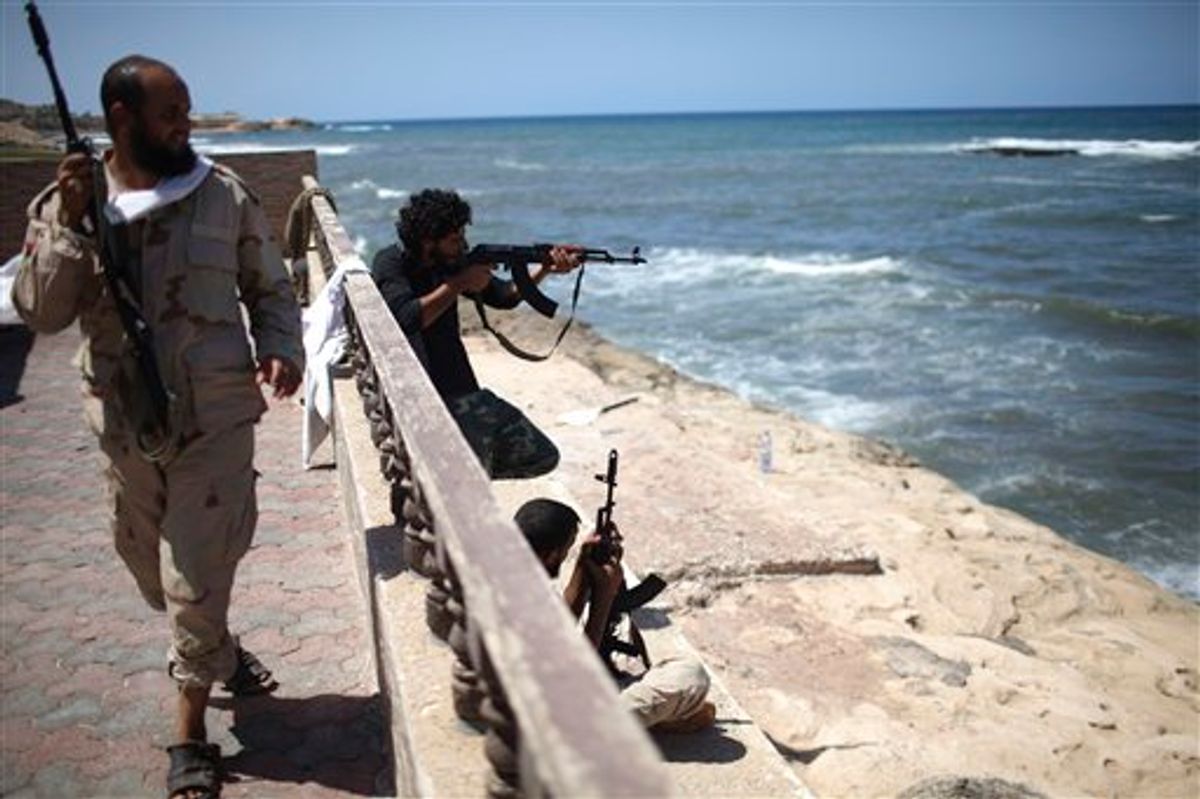 Libyan rebels are demanding that Algeria return Moammar Gadhafi's wife and three of his children for trial after they fled, raising tensions between the neighboring countries.

Algeria's decision to host members of the Gadhafi clan is an "aggressive act against the Libyan people's wish," said Mahmoud Shammam, information minister in the rebels' interim government.

Safiya Gadhafi, her daughter Aisha and sons Hannibal and Mohammed entered Algeria on Monday, while Gadhafi and several other sons remain at large. In Washington, the Obama administration said it had no indication that Gadhafi himself has left the country.

"We are determined to arrest and try the whole Gadhafi family, including Gadhafi himself," Shammam said late Monday night. "We'd like to see those people coming back to Libya."

Rebel leaders said they were not surprised to hear Algeria welcomed Gadhafi's family. Throughout Libya's six-month uprising, rebels have accused Algeria of providing Gadhafi with mercenaries to repress the revolt.

The departure of Gadhafi's family was one of the strongest signs yet that the longtime leader has lost his grip on the country.

Gadhafi's children played important roles in the country's military and economic life. Hannibal headed the maritime transport company; Mohammed the national Olympic committee. Aisha, a lawyer, helped in the defense of toppled Iraqi dictator Saddam Hussein in the trial that led to his hanging.

Rebels worry that if Gadhafi is not killed or captured, he will stoke more violence.

Rebel fighters backed by an escalating NATO bombing campaign are converging on Gadhafi's hometown of Sirte, his last major bastion of support in largely rebel-controlled Libya, amid speculation the longtime Libyan leader might be hiding there.

Sirte, some 250 miles (400 kilometers) east of Tripoli, is heavily militarized and shows no signs yet of surrendering. Rebels say they are trying to negotiate a takeover to avoid raging battles in the streets of the city, whose entrances are reportedly mined.

Some 150 kilometers (90 miles) west of Sirte Tuesday, about a dozen armored, gun-mounted trucks were parked at a staging ground in barren desert. A highway overpass provided some shade for rebels, most dressed in T-shirts and camouflage pants.

"The leadership told us to wait for now," Shallouf said. "We don't have any information about the negotiations. Maybe there will be an assault after Eid," the holiday marking the end of Ramadan, the Muslim holy month of fasting.

Mohammed Amer, another local rebel commander, was dismissive of Gadhafi.

"Gadhafi has no more brigades left or equipment," Amer said. "He just has mercenaries who take his money."

A NATO officer, who asked not to be identified because of alliance rules, said on Monday there was fighting 30 miles (50 kilometers) east of Sirte. He said there are still clashes around Sirte, Bani Walid south of Misrata and Sebha further south.

In Tripoli, rebel leaders trying to set up a new government struggled with widespread shortages of water and fuel. In one neighborhood in the capital, dozens of motorists broke into a gas station Monday and filled plastic contains with fuel. Long lines formed at other gas stations.

Some residents filled containers with drinking water from large trucks, while others relied on wells. One of the water truck drivers, Ramzi Abu Shabaan, said the shortages were a small price to pay.

"I don't care if we go without water for two months even -- frizz-head is gone -- it's worth it," using a commonly used derogatory nickname for Gadhafi.

Shops selling clothes, shoes and toys opened for the first time since the rebels entered the city Aug. 20.

Children accompanied their mothers and fathers into shops to pick clothes and toys for this week's Muslim holiday.

"This will be the happiest Eid we celebrate," said Munira Omar, 30 who bought her two daughters hair clips and dresses.