Truthers and Birthers ... and now Tenthers

Bachmann, Perry and other odd theorists who think the U.S. government is unconstitutional 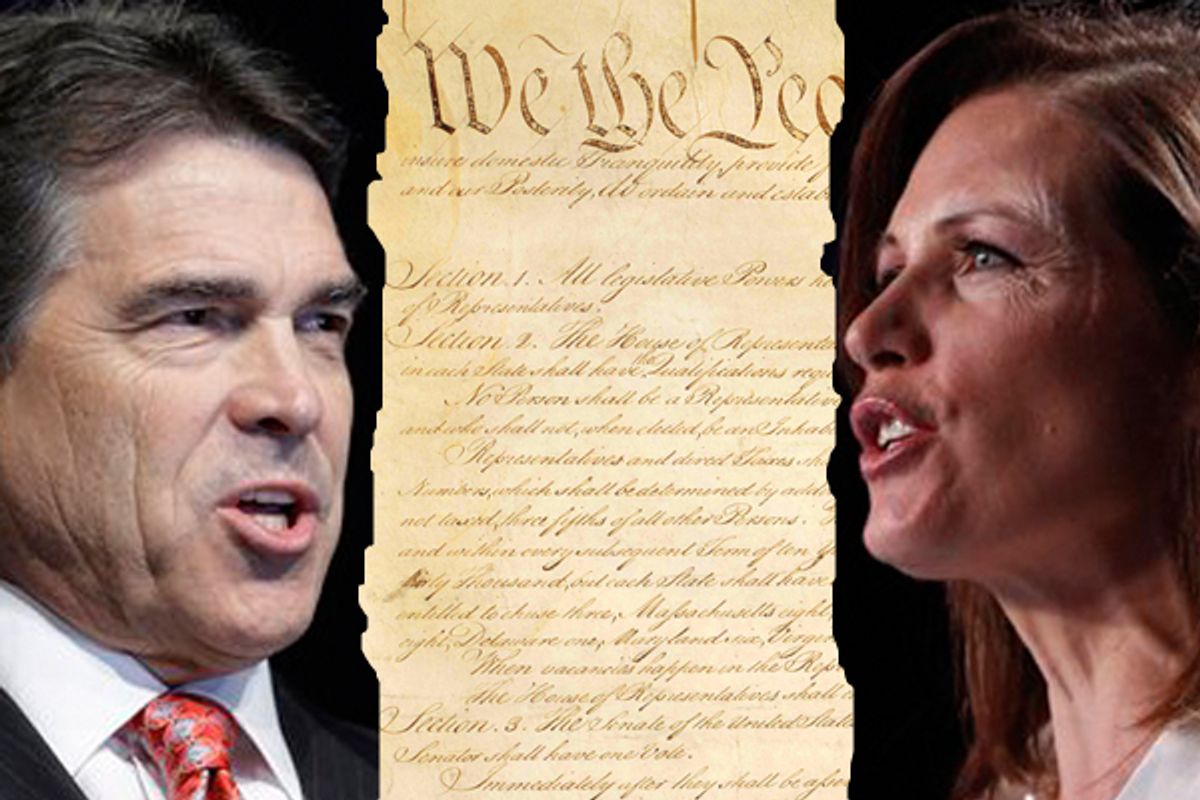 Michele Bachmann likes to call herself a "constitutional conservative." As her campaign wears on, she owes the country a clearer understanding of precisely what this means. Now comes Texas Gov. Rick Perry, the new leader in the Republican nomination race polls, with a record of similar publicly uttered impulses that seems to want to use the 10th Amendment of the U.S. Constitution to repeal most of the 20th century.

It's not really new for "tenthers" like Bachmann and Perry to enlist the 10th Amendment as an argument against programs they dislike, although their tentherist utterances exceed similar impulses by yesterday's righties.

Don't get your hopes up, but wouldn't it be great if this campaign, especially the Bachmann and Perry campaigns, led the country to face the fundamental question of tentherism?

For those of you coming late to the discussion, the Tenth Amendment, written by James Madison to fulfill a bargain even though he thought it unnecessary, states:

"The powers not delegated to the United States by the Constitution, nor prohibited by it to the States, are reserved to the States respectively, or to the people."

In a piece yesterday about Perry's tentherism, New York Times reporter Manny Fernandez made a pretty serious mistake. He said, in his own voice, that the Tenth Amendment "reserves to the states the powers not explicitly given to the national government."

If that word "explicitly" was in the 10th Amendment, this would probably be a very different country. But, as you can see from the full text of the amendment above, "explicitly" ain't in there, although Bachmann and Perry proceed, selectively and erratically and without an honest discussion, as if it were.

Forget about "Obamacare," the constitutionality of which is now before the courts. If the Congress has only those powers explicitly delegated by the words of the Constitution, then Medicare and Medicaid are unconstitutional. The Constitution never mentions healthcare or insurance, let alone two vast nationalized programs to provide health insurance to the poor and the elderly.

Somebody needs to ask Bachmann and Perry (I've tried, multiple times, with Bachmann, but she hasn't responded) what provision of the Constitution explicitly authorized the creation of Medicare and Medicaid (and, for that matter, the Centers for Disease Control, the VA hospital system and everything else that the feds do in the field of public health)? If these programs are unconstitutional, why do they not explicitly seek their abolition?

By the way, throw in Social Security. The Constitution doesn't mention public pensions or social insurance or whatever category you want to put Social Security in. We're saving some serious public dollars now.

Don't stop there. The Constitution doesn't explicitly authorize the federal government to maintain a vast network of permanent foreign military bases, doesn't authorize the creation of the CIA, gives the federal government no explicit power to get into public education. (Bachmann, I know, agrees with this one and favors an end to all federal education spending, but she hasn't applied the same test to the military and intelligence budgets.) Oh yeah, no mention of federal emergency assistance or disaster relief from floods, earthquakes, hurricanes, tornadoes.

So, how does the federal government get away with doing all these things that are not explicitly authorized? Well, for starters, the 10th Amendment doesn't say "explicitly," although Bachmann and Perry seem to think that "explicitly" is implicitly in there.

The Constitution explicitly gives Congress the power to tax and spend. It provides federal authority to regulate interstate commerce (the need for such a power was the biggest single reason that the Constitutional Convention was called). It admonishes Congress to "promote the general welfare." In the famous "elastic clause," the Constitution gives Congress the "Power - To make all Laws which shall be necessary and proper for carrying into Execution" all of the powers "vested by this Constitution in the Government of the United States, or in any Department or Officer thereof."

On the military stuff, the Constitution authorizes the national government to "provide for the common defence," empowers Congress to create an army and a navy (no mention of an Air Force or any Marines), appoints the president as commander in chief of the armed forces, and ...

Well, you probably have the idea by now. There are a number of words and phrases in the Constitution that are not very explicit. Perhaps "promoting the general welfare" implies Social Security and Medicare. But if Bachmann and Perry want to go there, how can they make a principled objection if someone else believes that the general welfare promotion or the regulation of interstate commerce implies some other program that they don't like.

So here's hoping that at the next debate (which will be the first one featuring Perry and Bachmann together) that the question is asked:

"Do you believe that the Constitution gave Congress the power to create Social Security and Medicare, and if so, where in the Constitution do you find this power, and if not, what do you propose to do about it?"