As the music industry melts, Juliana Hatfield and other artists look to a new source for money -- their fans 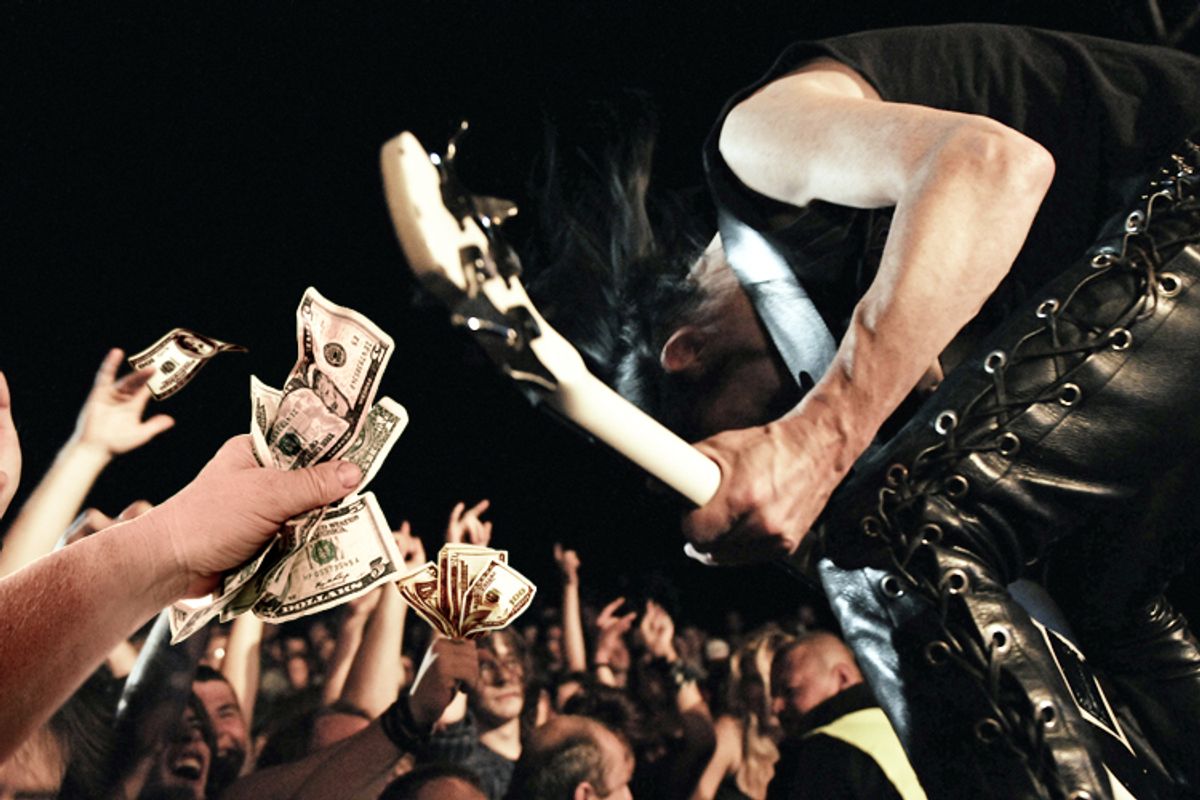 Juliana Hatfield, a singer-songwriter whose acerbic single "My Sister" was a staple on modern-rock radio during the summer of 1993,  was planning to quit the business not too long ago. Music, she recalled thinking, "is for kids. I'm not a kid anymore." She was considering grad school, maybe making a documentary. But when she was taken by the urge to write more songs, she realized she didn't have the money to pay for studio time, musicians and the like.

And so, like an increasing number of her peers, Hatfield appealed directly to her smaller-but-devoted fan base: Help me pay to make my new album, she asked listeners, and in exchange for your contributions, I'll take you behind the scenes of the recording process, interact with you along the way and deliver a solid record. Almost 1,200 people contributed, enabling her to complete "Speeches Delivered to Animals and Plants," which she released this week.

Though she declined to discuss how much money she raised, Hatfield said the fund drive "saved my ass, really. It made the project possible. I literally did not have the funds at hand. I would not have been able to make this album without the money that I raised."

Hatfield connected with her fans through a two-year old service called Pledge Music. Founded by Benji Rogers, a musician from London whose parents were music industry managers, Pledge provides artists with a fundraising apparatus that allows them to raise the money to make new EPs and full-length albums. On the other side are the fans, who get a chance to live with a record as it goes from conception to completion.

Here's how Hatfield put it on her Pledge page: "You are the modern Medicis and I need your help to make this happen. Your pledge for any of the items and experiences I am offering will directly support the recording, production, packaging, and marketing of my new album. ... at the very least you'll get 12 brand new songs and you'll also gain access to my private updates page, where I'll be posting exclusive videos, mp3's, photos and musings."

Pledge's business model, which also includes a component whereby artists designate a portion of the funds to charity, isn't brand-new. Services like Kickstarter, SellaBand and SlicethePie do similar work with musicians and other artists. But as the music industry continues to splinter, musicians of all stripes -- up-and-comers looking to create some buzz (Marissa Nadler), mid-career artists who've been dropped by labels (Jill Sobule) and even venerable performers who want more control over their careers (Lloyd Cole) -- are asking their fans for a few bucks to help finish their albums.

"Whereas a regular label release will be [publicized] two weeks before and two weeks after, we can be months and months before, even while the record's being made, bonding the artist and fan," said Pledge's Rogers, in an interview. "And therefore when the record drops, the fans are emotionally and financially invested in the process."

Jim Guerinot, who manages artists like Trent Reznor and Gwen Stefani, said this kind of collaboration between performers and fans won't necessarily redefine the industry. "I think it's another lane in a multi-lane highway. It used to be a single-lane highway, and now there are several routes to get where you're going," he said. "It's pretty darn clever. All of these barriers that existed 15 years ago are being altered. One of them is financing, and this is an interesting way to mitigate that challenge."

David Bazan, the singer best known for his work with the indie band Pedro the Lion, is another artist who appealed to his fans for financial help. Bazan asked for donations starting at $35. Donors got the album they helped fund, "Strange Negotiations," and T-shirts that read "I Helped Bazan Make a Record." Bazan said about 900 people contributed.

"We've cultivated a relatively intimate relationship with 10,000 or 15,000 people who've supported my music by buying my records and coming to see shows over the last several years," he said. "So we just thought we'd see if people would do a glorified pre-order. With us it was, 'If you guys pay in advance for this thing, we're going to try to turn it around real quick.' And thankfully we did.

"It definitely worked. I was able to pay the guys to work on the record, and pay my bills during that period."

I asked Bazan if he felt compelled to make a certain kind of record, one that would conform to wishes of the die-hards who helped fund the album. "I think my posture is that if I owe anything to the people who've supported me it's to be honest about the process," he said.

"In a sense what I owe to them is to try to disregard my perception of what they like or dislike. I owe that to myself, I owe that to any serious person who wants to consume what I'm making. For me it just redoubles my focus on that. There is a pressure that comes to bear on the process, but it's a good pressure. I don't need to make a more accessible record or a less accessible record -- I just have to get alone and quiet, and figure out what is genuinely coming out of me at that point."

After parting with a small label that had released several of her previous records, Marissa Nadler, a critically praised Boston singer-songwriter, decided to use Kickstarter to fund the making of her self-titled album, which was released this summer. Her funding goal was $11,000. Almost 400 people donated, leaving Nadler with a total of more than $17,000. But once she had the cash, her music skills didn't necessarily translate to running her own small business.

"I thought, 'Oh, I'm going to put this record out and it's going to be awesome.' But there are certain things I didn't think about," Nadler said, like publicity and shipping costs. "Strangely enough, 60 or 70 percent of the pledges were from Europe, which sounds great. But then I didn't think about the fact that it costs $12 to mail a vinyl record over to Europe."

Nadler said she was initially hesitant to solicit donations. “The one thing that I think is a misconception is that people think you're getting something for free, or you're getting a handout, because you're asking for money. When I first heard about it I thought, 'Oh, I don't want to do that.' It seemed almost like you were admitting fault, or unworthiness. But then I kept hearing about high-profile artists who had been screwed over one way or another by labels. There's nothing wrong or surprising about finding yourself without a record label. That doesn't mean you're not good."

Hatfield was similarly skeptical at first. "I always thought, 'Oh, that's kind of pathetic.' I don't want to have to whore myself out to people and offer to make them dinner. I don't want to do house concerts. I don't want to be obligated to do these things." Her attitude changed, she said, when she learned that one of her favorite journalists was soliciting donations to help fund the publication of a book.

Releasing the record, Hatfield said, "was a full-time job. It was a lot of work, it was very time-consuming. There's the writing of the album, the recording of the album, the mixing of the album and while I'm doing that in the studio all day, at night I would come home and I would be packing stuff up and addressing stuff -- filling out a customs form for every single one of the foreign mailings. It's really not very artistic. Sometimes I get angry and I think, 'I'm an artist, man, why do I have to do all the grunt work?' But then I won't allow anyone else to do it for me so I can't complain."

Like Bazan, Hatfield said she didn't think that her more generous fans donated with the expectation that they'd have a voice in how the record ended up sounding.