Hell is other people's children

I'm a mom, but as I watched kids act up on a recent outing, I had to wonder: Are today's parents terrible, or am I? 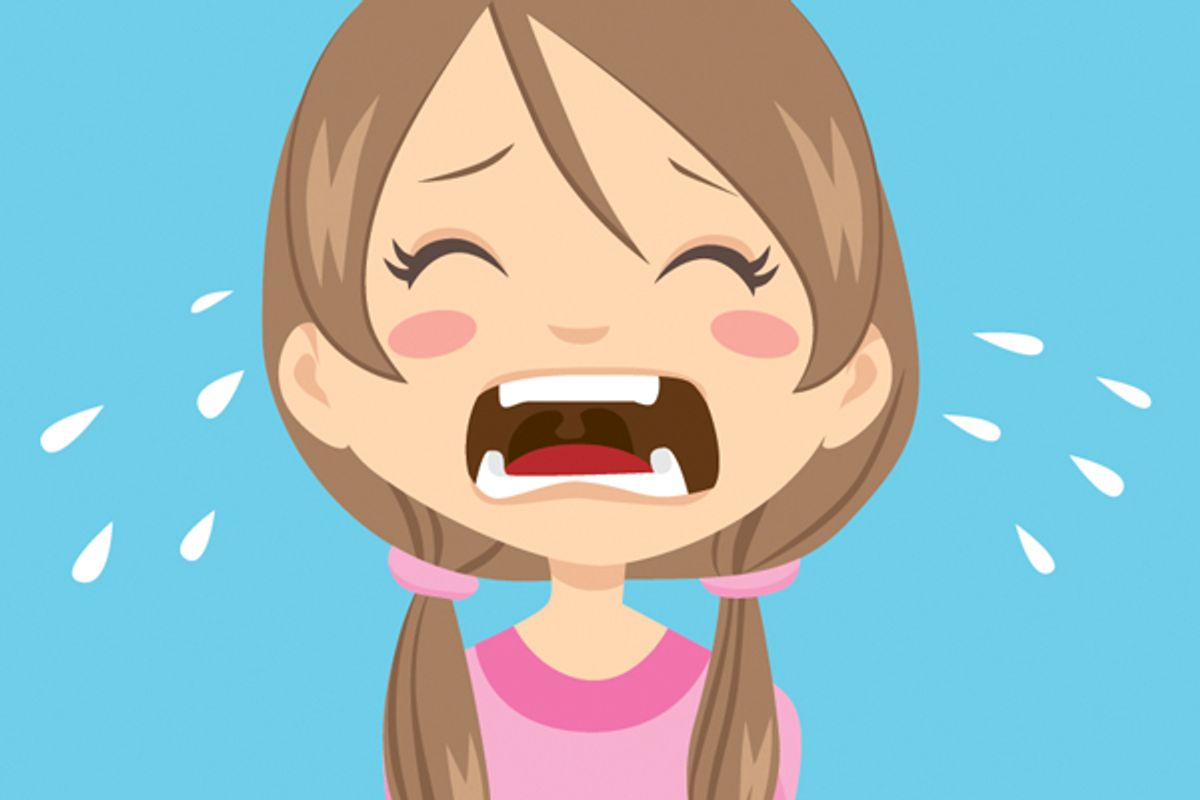 Glaring at my mommy-friend from the passenger seat of her car while thinking, "Your kids suck!" doesn't make me a bad person. At least, that's what I told myself as we crawled up the 405 freeway at an evolutionary pace on our return trip from the aquarium. To be clear, the aquarium was in Long Beach, a city that was apparently 4,000 miles from Los Angeles, every inch of which would be spent with this woman's children kicking the back of my seat.

No, that sentiment didn't make me a bad person, but my previous one -- that children in a broader, all-inclusive sense sucked universally and without reservation -- probably did. After all, I had two children of my own. Even in my current state of twitchy, aggravated exhaustion, I felt the whiff of disloyalty, so I revised my original thought. Upon further consideration, not all children sucked, just Other People's Children. No, I was not down with OPC, and in case you hadn't noticed, they were everywhere.

Take the aquarium, for instance. After a day of plodding through the exhibits in the company of hundreds of doting parents and their imperious offspring, I was beginning to see the appeal of vacation destinations that billed themselves as "child-free." As I hunkered down for the rest of the drive home, however, an uneasiness settled over me and a familiar but uncomfortable question began to stir in my mind: Was it them ... or was it me?

Even before I was a parent, I exhibited certain behavioral tendencies I liked to think of as "extreme organizational skills." Outings required preparations, and big outings triggered a questionnaire. Where would we eat? Would a sweater be required? What was the bathroom situation? Becoming the mother of two preschoolers, however, amplified these tendencies into the realm of the Secret Service performing a security sweep prior to a visit by the POTUS. There were plans, backup plans, emergency supplies, alternate routes and a heightened awareness of any potential threat. There were no code words, but only because my husband and children refused to take them seriously. For obvious reasons, I was most comfortable having play dates in our home. My last extended outing with the children -- a day trip to Lego Land -- had been so overthought and overplanned that it was about as fun as driving two flight-risk detainees to the border for a prisoner exchange.

So when a woman I'll call Gwen, a mom acquaintance at our preschool, invited my children and me to go to the aquarium with her and her 3- and 5-year-old, I politely declined. After all, a children's aquarium sounded like a destination swarming with, well, children. Children who operated outside our preschool's regime of enforced kindness and would likely be modeling behaviors that would take years for me to extinguish once my children were exposed to them, behaviors like chewing tobacco and throwing Ninja stars. Besides, I didn't know Gwen all that well. What if she turned out to be one of those spontaneous moms who took impromptu trips to the beach, letting her children kick at the edge of the surf in their street clothes? What if she mocked my itinerary?

"I knew you were going to say no," said Gwen, grabbing a fistful of cracker fishies from a plastic tub on the preschool counter, then popping them into her mouth in rapid succession.

“Look, I can tell this isn't your thing, but just take the bullet and do it for your kids.”

Not my thing? Was it that obvious? I was about to suggest an alternative -- a play date at our house (with our toys and our bathroom) -- when my daughter came trotting into the school's kitchen.

“Your mommy and I are planning a trip to the aquarium to see the big fishes," said Gwen, squatting down to get my daughter's full attention. "Would you like to go?”

And so, thanks to this act of naked mommy aggression, we spent a day at said aquarium piloting two double strollers like ice-cutters through a sea of children, their parents and assorted caregivers. We observed most every manner of ocean-dwelling creature, from filmy baby jellyfish to majestic sea turtles to sassy dolphins. The variety of species was stunning, yet these life forms shared a striking commonality: In front of every one of their enclosures stood a child tapping, banging or slapping the glass.

Within moments of witnessing this, my children tilted forward in their stroller seats and reached out with four little hands, straining to take their rightful shot at the nearest fish tank.

"No, no," I said and backed the stroller away from the display. I pointed to the brass plaque above the viewing window that read "Please Don't Tap the Glass." "See that? It's against the rules to hit the glass. Besides, the fish don't like it." My children's heads swiveled in unison as their eyes traveled from my finger to the plaque to the boy standing in front of the lobster tank and pummeling the glass with both fists. Every few hits, he would change things up and deliver a series of savage kicks to the wall beneath the window. On the other side of the glass, an enormous lobster swayed in the tank's artificial current and returned the child's gaze. Then the lobster looked over at me in that way that only a lobster can, and I knew we were thinking the same thing: Where the hell were this kid's parents?

Hours later, after an ironic fish stick lunch and many laps on foot through the portion of the aquarium designed especially for preschoolers, we approached an exhibit that allowed visitors to get a close-up view of more amiable aquarium residents. Gwen's children were already among the crush at the wet counter, where a harried employee was supervising the children's encounters with the sea life. "Please do not pick up the starfish," the 60-ish woman said in a drone that indicated it was probably her hundredth repetition of the day. "Please do not touch the stingrays." All along the counter, the hands reached over the partition anyway -- groping, testing and eliciting more admonishments from the aquarium lady, whose pointed glances at the offending children's parents went unanswered.

We stepped up to the counter and my children followed suit, their hands popping over the partition, unable to resist the urge to touch.

"Remember the rules," I began, then became distracted by a disturbance further down the counter. Gwen's son had managed to lean out past the partition, where the dinner-plate-size stingrays were surfacing. Before the aquarium lady could do anything, he smacked at one of the rays, his hand making a loud slap on the water. Next to him, his sister cheered, waving the starfish she had just plucked from the shallows.

"Young man!" the aquarium lady barked and I was mortified on Gwen's behalf, until I saw that she was standing nearby, taping it all on her phone and smiling.

I don't think they make grown-ups like they used to. The united front I knew as a girl -- the humorless, hairspray- and tobacco-scented band of the demographic that held dominion over all youngsters, both theirs and everyone else's -- seems not to exist anymore. Weren't we supposed to turn into those people at some point? Could the Sansabelt gene have extinguished itself after only a handful of generations? Or were the parents of my youth just as scared as I am -- scared that I'm going to screw it up? Terrified of all that I don't know and of the tiny glimpse I've had of just how high the stakes are?

Then again, maybe I'm just a throwback -- a discontinued model raised in the days of the spankable moment who is unwilling to flex with the newer, looser times. I'm not saying I'm proud of it. I'm just trying to be self-aware. But can this be true? Is this really who I am? I was a camp counselor, for God's sakes -- I spent entire summers teaching kids my customized version of "the Hustle" to Duran Duran songs, getting pipe cleaners braided into my hair and acting like I didn't notice when they were tying my shoelaces to the bench. I don't remember being this uptight back then. I'm pretty sure I was fun. Never tan, mind you, but fun.

I'll never be Spontaneous Mom. I know this. But maybe I can get Commando Mom to put the hand sanitizer back in the holster long enough for us to have the kind of loud, messy and disorganized experiences that children -- and their families -- are supposed to have. If the key to life is balance -- and I've got four coffee mugs that say it is -- then somewhere between overcoming my fears and embracing humanity's imperfections is the mom I'm striving to be. That being said, please don't tap on the glass. And if you need tissues or toilet seat covers just let me know; I've always got 'em in my purse.

Anna Lefler is the author of the forthcoming humor book "The CHICKtionary: From A-Line to Z-Snap, the Words Every Woman Should Know" (Adams Media, 2011). Coincidentally, she is also @AnnaLefler on Twitter.