Jon Huntsman tricks billionaires into wasting money on his campaign

Updated: The already wealthy and decidedly un-nominatable GOP longshot has some high-profile donors 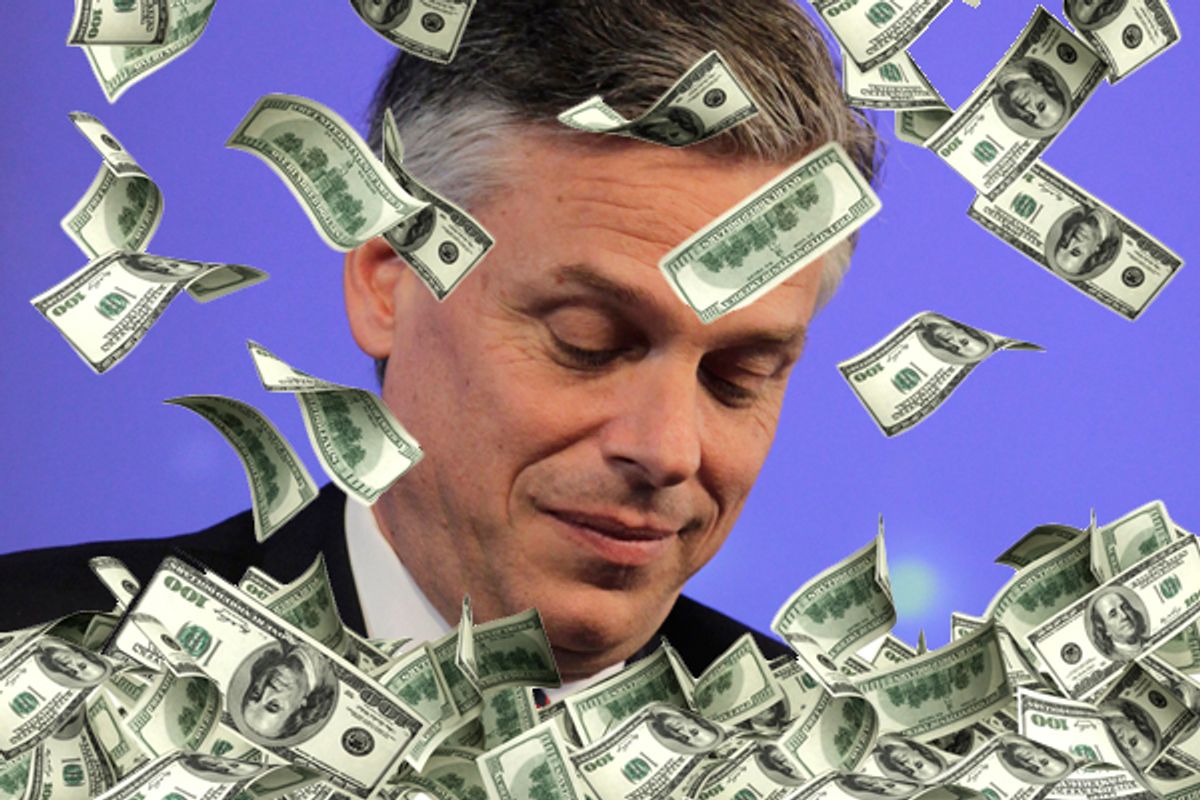 [UPDATED BELOW] Former Utah Governor Jon Huntsman, the thinking man's 2012 GOP candidate, is polling at 1 percent in the latest CNN poll, because there is not much interest in a thinking man's 2012 GOP candidate. Except among the press, where Huntsman is treated as a serious contender for the presidency instead of a guy with as much of a shot at winning a primary as Hugo Chavez.

Huntsman was on "PBS NewsHour" last week. He was scheduled for "Meet the Press" last weekend until Hurricane Irene bumped him. He was on "This Week" the weekend before. He made it to "The Today Show" this morning. Again: One percent in the polls.

This media attention is working on one front: A couple odd billionaires are throwing their financial support behind Huntsman, according to Ben Smith.

As the Salt Lake Tribune reports, Huntsman has a lot more money than your typical fringe candidate. This is mostly because his rich family is supporting him, but people named "Huntsman" are not the only ones donating to his PAC.

New York's Herbert Seigel, who turned boatmaker Chris-Craft into a television affiliate and media player and then sold out to News Corp, gave $400,000 with his wife, making him Huntsman's biggest single donor. (HE also supported Huntsman for governor.) Ron Perelman, a far showier New York tycoon, tabloid fixture, and bit player in the Monica Lewinsky scandal, gave $100,000 through his holding company.

On the other side of the country, Nike co-founder and chairman Phil Knight gave $25,000. It is, all in all, a pretty high-gloss roster.

Ron Perelman! That's a fun one. He's the angry billionaire corporate raider who had a minor role in the Lewinsky scandal and a major role getting an incredibly messy divorce from actress Ellen Barkin.

Phil Knight has a history of donating unwisely, so him wasting his money on Huntsman isn't too surprising. But I'm really not clear on why any other billionaire would send hundreds of thousands of dollars to someone who is both unelectable and also already very well-funded. (Besides the obvious fact that billionaires won't miss a couple hundred thousands dollars.)

If they want to support a moderate who believes in the scientific consensus on climate change and who supports revenue-neutral tax reform that eliminate loopholes, there is always Barack Obama.

Update: Reader Mel points me to the Huntsman/Perelman connection: Perelman's a Wharton alum, just like Huntsman's father (and Huntsman Jr. went to Penn). Of course it's some rich guy Ivy League thing, I should've guessed. Also it's fair to said that I overstated the moderateness of Huntsman's tax plan, by calling it moderate.