The former Massachusetts governor sure hates those Ivy League career politicians, like himself 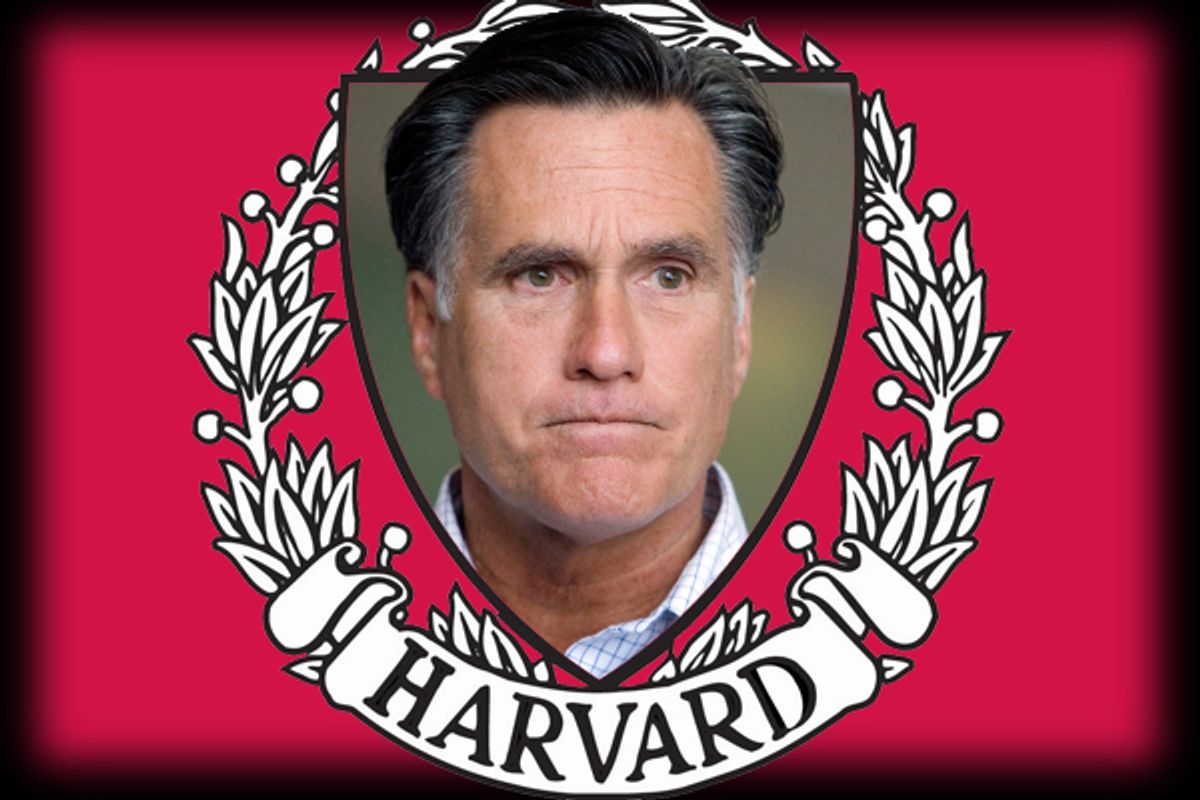 Mitt Romney constantly attacks Harvard, because Harvard is where girly intellectual egghead elitists go to college, while Real Men are plowing tractors or whatever one does on farms, until it is time to Go Fight in the War.

This week, Romney gave a foreign policy speech to some veterans, and he really gave Harvard what-for:

Chastising those who may believe that if the United States recedes, so, too, will its enemies, Romney bashed what is often seen as a liberal bastion.

“That may be what they think in that Harvard faculty lounge, but it’s not what they know on the battlefield!” he told the vets.

Of course, the Boston Globe and everyone else who knows even the slightest bit of biographical information about Mitt Romney realized that the former governor of Massachusetts is a Harvard alum. He went to Harvard Business and Harvard Law Schools.

Some people say it is a bit "hypocritical" or "transparently, desperately pathetic" of Romney to align himself with those who hate our nation's Ivy League elite, but it's really not. You see, Mitt Romney is actually just incredibly self-loathing. He clearly hates himself.

More evidence: Did Mitt Romney seriously think calling Rick Perry a "career politician" wouldn't remind people of Romney's status as the son of a prominent politician who's been running for offices on-and-off since 1994? Or does Mitt Romney simply hate the fact that he's a useless Harvard-educated career politician instead of something useful?

Private equity firms are evil Romney will most likely try to tie President Obama to reviled "bankers" who make vast fortunes liquidating companies and destroying quality middle-class and blue-collar jobs, much the same work Romney did at Bain Capital, the private equity firm he co-founded in 1984.

Former governors have no clue what they're doing Another anti-Perry line I expect to hear from Romney soon is that governors make bad presidents, because they lack foreign policy experience and expertise on national issues. Romney, a former governor who lost his one race for the U.S. Senate, will look immaculately coiffed but utterly dead-eyed as he recites this line in a future debate.

The Olympics are stupid and should never be held in America It was foolish of President Obama to try to bring the Olympics to Chicago, because the Olympics are an expensive waste of time and probably also part of the United Nations plot to enslave us to their one-world bicycle government, an increasingly desperate Romney will say at some point in the not-too-distant future. Romney, whose signature achievement in public service -- prior to establishing a healthcare system in Massachusetts now decried as socialism -- was his careful management of the 2002 Salt Lake City Olympic Games, will then go home and burn his framed photo of himself carrying the Olympic Torch on the first day of the games and the last day he can remember knowing what it was to feel joy.

Mormons are creepy A shocking, last-minute Jon Huntsman surge leads Romney to call the respected former Utah governor a "creepy cult follower" for his membership in the Church of Jesus Christ of Latter-day Saints, the faith Romney has been practicing his entire life. "Boy, Mormons, they don't even drink coffee. What a bunch of nuts!" Romney will say, while carefully unbuttoning his shirt to show that he's not wearing his sacred temple garments. "They're all polygamists," Romney will shout at a Tea Party rally. His sons will stop taking his calls.

I hate white people In order to win support from Barack Obama's disillusioned liberal former supporters, Mitt Romney will announce that he will end the tyrannical supremacy of the evil white oppressors forever.