Facts and myths in the WikiLeaks/Guardian saga

A series of accidental events led to the publication of 251,000 diplomatic cables in unredacted form 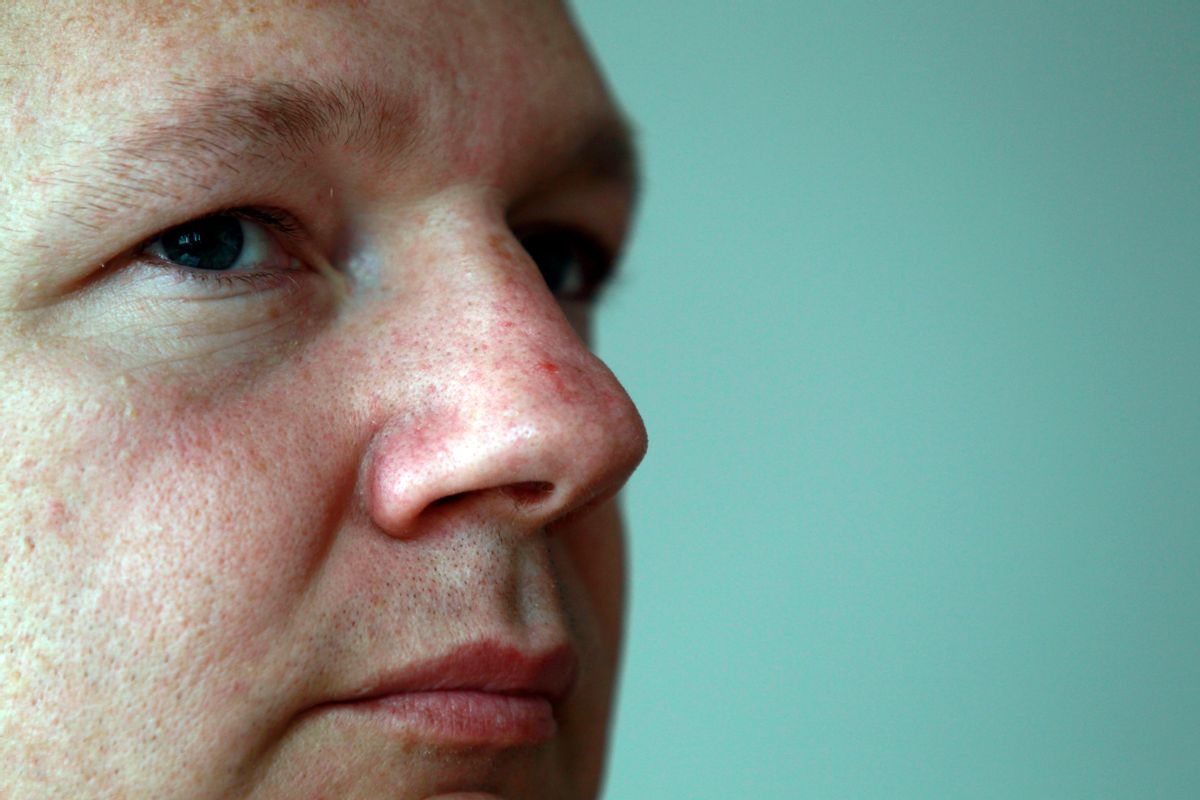 Wikileaks founder Julian Assange talks to members of the media during a news conference in central London, Thursday, July 14, 2011. DataCell ltd of Iceland, who was processing paymentd for Wikileaks, filed a complaint against international caed companies, Visa Europe and MasterCard Europe for infringement rules of the EU. DataCell claims that the closure by the credit card companies of DataCell's access to the payment card networks remains in order to stop donations to Wikileaks. (AP Photo/Lefteris Pitarakis) (Associated Press)
--

A series of unintentional though negligent acts by multiple parties -- WikiLeaks, The Guardian's investigative reporter David Leigh, and Open Leaks' Daniel Domscheit-Berg -- has resulted in the publication of all 251,287 diplomatic cables, in unredacted form, leaked last year to WikiLeaks (allegedly by Bradley Manning).  Der Spiegel (in English) has the best and most comprehensive step-by-step account of how this occurred.

This incident is unfortunate in the extreme for multiple reasons: it's possible that diplomatic sources identified in the cables (including whistleblowers and human rights activists) will be harmed; this will be used by enemies of transparency and WikiLeaks to disparage both and even fuel efforts to prosecute the group; it implicates a newspaper, The Guardian, that generally produces very good and responsible journalism; it likely increases political pressure to impose more severe punishment on Bradley Manning if he's found guilty of having leaked these cables; and it will completely obscure the already-ignored, important revelations of serious wrongdoing from these documents.  It's a disaster from every angle.  But as usual with any controversy involving WikiLeaks, there are numerous important points being willfully distorted that need clarification.

Let's begin with the revelations that are being ignored and obscured by this controversy.  Several days ago, WikiLeaks compiled a list of 30 significant revelations from the newly released cables, and that was when only a fraction of them had been published; there are surely many more now, including ones still undiscovered in the trove of documents (here's just one example).  The cable receiving the most attention thus far -- first reported by John Glaser of Antiwar.com -- details a "heinous war crime [by U.S forces] during a house raid in Iraq in 2006, wherein one man, four women, two children, and three infants were summarily executed" and their house thereafter blown up by a U.S. airstrike in order to destroy the evidence.  Back in 2006, the incident was discussed in American papers as a mere unproven "allegation" ("Regardless of which account is correct . . "), and the U.S. military (as usual) cleared itself of any and all wrongdoing.  But the cable contains evidence vesting the allegations of Iraqis with substantial credibility, and that, in turn, has now prompted this:

Iraqi government officials say they will investigate newly surfaced allegations that U.S. soldiers shot women and children, then tried to cover it up with an airstrike, during a 2006 hunt for insurgents.

An adviser to Prime Minister Nouri al-Maliki, Ali Al-Moussawi, said Friday the government will revive its stalled probe now that new information about the March 15, 2006, raid has come to light.

As usual, many of those running around righteously condemning WikiLeaks for the potential, prospective, unintentional harm to innocents caused by this leak will have nothing to say about these actual, deliberate acts of wanton slaughter by the U.S.  The accidental release of these unredacted cables will receive far more attention and more outrage than the extreme, deliberate wrongdoing these cables expose.  That's because many of those condemning WikiLeaks care nothing about harm to civilians as long as it's done by the U.S. government and military; indeed, such acts are endemic to the American wars they routinely cheer on.  What they actually hate is transparency and exposure of wrongdoing by their government; "risk to civilians" is just the pretext for attacking those, such as WikiLeaks, who bring that about.

That said, and as many well-intentioned transparency supporters correctly point out, WikiLeaks deserves some of the blame for what happened here; any group that devotes itself to enabling leaks has the responsibility to safeguard what it receives and to do everything possible to avoid harm to innocent people.  Regardless of who is at fault -- more on that in a minute -- WikiLeaks, due to insufficient security measures, failed to fulfill that duty here.  There's just no getting around that (although ultimate responsibility for safeguarding the identity of America's diplomatic sources rests with the U.S. Government, which is at least as guilty as WikiLeaks in failing to exerise due care to safeguard these cables; if this information is really so sensitive and one wants to blame someone for inadequate security measures, start with the U.S. Government, which gave full access to these documents to hundreds of thousands of people around the world, at least).

Despite the fault fairly assigned to WikiLeaks, one point should be absolutely clear: there was nothing intentional about WikiLeaks' publication of the cables in unredacted form.  They ultimately had no choice.  Ever since WikiLekas was widely criticized (including by me) for publishing Afghan War documents without redacting the names of some sources (though much blame also lay with the U.S. Government for rebuffing its request for redaction advice), the group has been meticulous about protecting the identity of innocents.  The New York Times' Scott Shane today describes "efforts by WikiLeaks and journalists to remove the names of vulnerable people in repressive countries" in subsequent releases; indeed, WikiLeaks "used software to remove proper names from Iraq war documents and worked with news organizations to redact the cables."  After that Afghan release, the group has demonstrated a serious, diligent commitment to avoiding pointless exposure of innocent people -- certainly far more care than the U.S. Government took in safeguarding these documents.

What happened here was that their hand was forced by the reckless acts of The Guardian's Leigh and Domscheit-Berg.  One key reason access to these unredacted cables was so widely distributed is that Leigh -- in his December, 2010, book about the work he did with WikiLeaks -- published the password to these files, which was given to him by Julian Assange to enable his reporting on the cables.  Leigh claims -- and there's no reason to doubt him -- that he believed the password was only valid for a few days and would have expired by the time his book was published.

That belief turned out to be false because the files had been disseminated on the BitTorrent file sharing network, with that password embedded in them; Leigh's publication of the WikiLeaks password in his book thus enabled widespread access to the full set of cables.  But the key point is this: even if Leigh believed that that particular password would no longer be valid, what possible point is there in publishing to the world the specific password used by WikiLeaks or divulging the types of passwords it uses to safeguard its data?  It is reckless for an investigative reporter to gratuitously publish that type of information, and he absolutely deserves a large chunk of the blame for what happened here; read this superb analysis by Nigel Parry to see the full scope of Leigh's culpability.

Then there is Domscheit-Berg and "Open Leaks." Last year, Domscheit-Berg left WikiLeaks and started a new group to great media fanfare, even though his group has not produced a single disclosure.  Instead, he and his thus-far-inaccurately-named group seem devoted to only two goals: (1) cashing in on a vindictive, petty, personality-based vendetta against Assange and WikiLeaks; and (2) bolstering secrecy and destroying transparency, as Domscheit-Berg did when he permanently deleted thousands of files previously leaked to WikiLeaks, including documents relating to the Bank of America.  It was Domscheit-Berg who removed the files from the WikiLeaks server, including (apparently unbeknownst to him) the full set of diplomatic cables.

That act by Domscheit-Berg, combined with the publication of its password by Leigh and the dissemination of the files to "mirror sites" by well-intentioned WikiLeaks supporters after cyber-attacks on the group, all combined to enable widespread, unfettered access to these diplomatic cables.  Once WikiLeaks realized what had happened, they notified the State Department, but faced a quandary: virtually every government's intelligence agencies would have had access to these documents as a result of these events, but the rest of the world -- including journalists, whistleblowers and activists identified in the documents -- did not.  At that point, WikiLeaks decided -- quite reasonably -- that the best and safest course was to release all the cables in full, so that not only the world's intelligence agencies but everyone had them, so that steps could be taken to protect the sources and so that the information in them was equally available.

Serious caution is warranted in making claims about the damage caused by publication of these cables.  Recall that Adm. Michael Mullen and others accused WikiLeaks of having "blood on its hands" as a result of publication of the Afghan War documents, but that turned out to be totally false; as Shane noted today in the NYT: "no consequence more serious than dismissal from a job has been reported."  Even Defense Secretary Robert Gates mocked claims about the damage done by WikiLeaks as "significantly overwrought."

That said, there's little doubt that release of all these documents in unredacted form poses real risk to some of the individuals identified in them, and that is truly lamentable.  But it is just as true that WikiLeaks easily remains an important force for good.  The acts of deliberate evil committed by the world's most powerful factions which it has exposed vastly outweigh the mistakes which this still-young and pioneering organization has made.  And the harm caused by corrupt, excessive secrecy easily outweighs the harm caused by unauthorized, inadvisable leaks.

UPDATE:  Several noteworthy points that have arisen from the discussion in the comment section (which is particularly worth reading today) and elsewhere:

(1) David Leigh appears in the comment section and responds, though he doesn't really address any of the criticisms I voiced; my reply to him is here;

(2) the information contained in the cable about the killings in Iraq was actually published previously in this report, though the WikiLeaks release has obviously drawn substantially more attention to it, as evidenced by the reaction of the Iraqi Government (on a positive note, it's very possible that the attention being drawn to this incident may thwart the Obama administration's efforts to have Iraq agree to keeping U.S. troops in that country beyond the 2011 deadline, as citizens tend to get angry when foreign armies murder their fellow citizens in cold blood and then air-attack the house where it happened to destroy the evidence);

(3) in terms of assessing harm from publication of the cables, recall -- as several commenters noted -- that the U.S. Government has known about the leak of these cables for more than a year and thus had ample time to warn anyone identified in them of this risk; that doesn't excuse any wrongdoing, but it does reduce the likelihood of serious harm; and,

(4) one of the newly released cables reveal that Israel, according to what it told the U.S., attacked what it claims were Hamas members in Gaza with drones, and accidentally killed 16 people inside a mosque during prayer time.  You won't hear very many people condemning WikiLeaks for "putting civilians at risk" devote much of their attention to this revelation either.