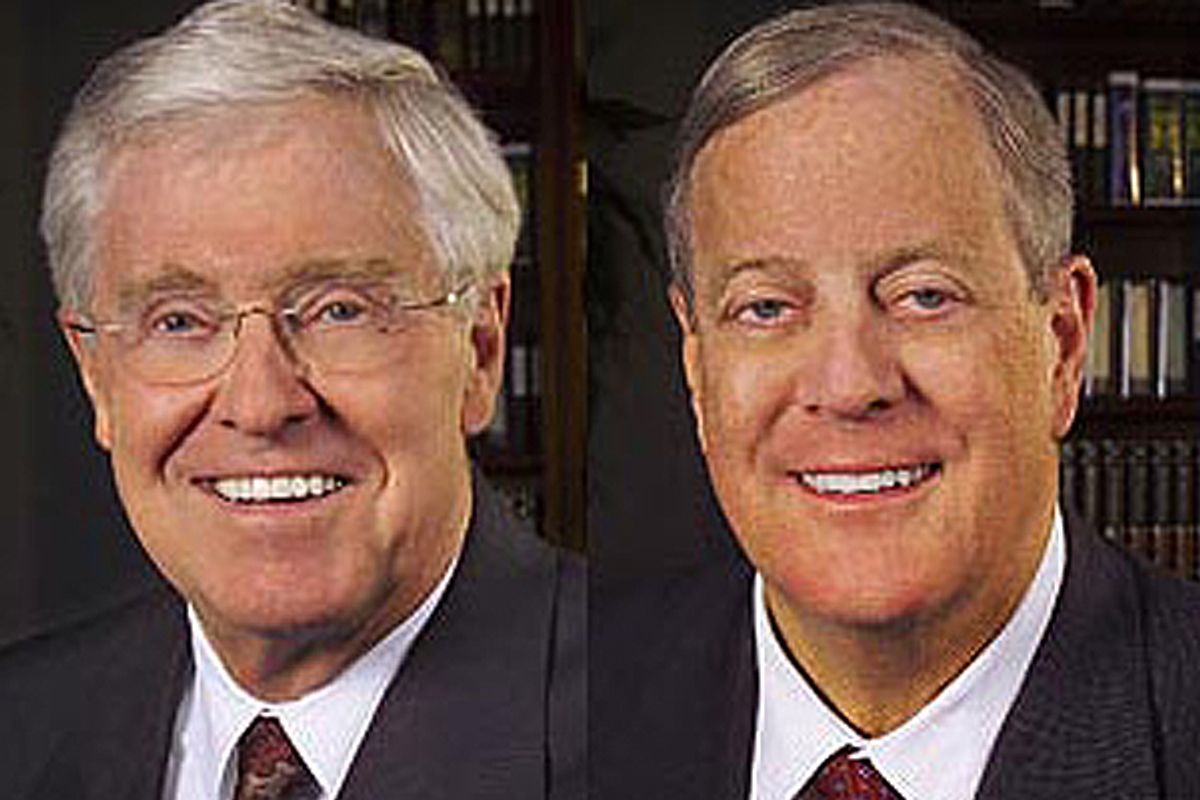 The Koch brothers -- the super-wealthy longtime funders of Republican politicians and libertarian think tanks and big industry front groups and much of the rest of the regulation-gutting anti-labor economic arm of the conservative movement for the last couple of decades -- have a big retreat twice a year where they and their fellow wealthy donors to the cause coordinate their campaign strategy and congratulate themselves for loving Liberty so much. It is, obviously, all top-secret, and no one is supposed to know who attends or what they are doing. Except someone taped the conference this year and sent the tape to Mother Jones, so now we have a list of secret million-dollar donors to Koch-backed groups.

Think Progress revealed some of the invitees to one of last year's meetings.. Increased awareness of the role the Kochs play in our national politics led to protests at the February retreat, which was suddenly guarded by hired goons. (Right-wingers decried these protests as assaults on the civil liberties of the Kochs and their billionaire friends.)

The Vail, Colo., Koch retreat, held in June, was similarly well-guarded. The Kochs prize their privacy above everything besides their right to spend an endless amount of secret money encouraging the adoption of policies that will allow them to continue making their money. Their friends feel similarly:

Audio technicians even set up outward-pointing speakers around the perimeter of the outdoor dining pavilion, according to sources, emitting static to frustrate would-be eavesdroppers.

But whoops: Someone was taping the whole thing from the inside. Including this part:

"There is anonymity that we can protect," noted emcee "Kevin"—likely Kevin Gentry, a VP for the Charles G. Koch Charitable Foundation—as he gently urged guests to open their wallets in support of the brothers' causes. Indeed, Charles Koch named 32 individuals and families who had donated more than $1 million over the previous 12 months, yet because of loopholes in federal campaign law, their donations do not exist in the public record.

So now we have this list, which is made up of names you may have heard before, if you follow conservative politics (the DeVoses) and a lot of names you probably haven't. It's an interesting collection of hedge fund billionaires, energy industry bigwigs, and other assorted corporate titans. They are desperate for anonymity because the Koch-ian worldview involves a hefty dose of fantastical paranoia, but also because their agenda (they get richer while the rest of us go to hell) tends to be pretty unpopular when it's explicitly laid out.

So go read the list. You deserve to know who actually makes up the conservative movement.