The "Shock Doctrine" comes to your neighborhood classroom 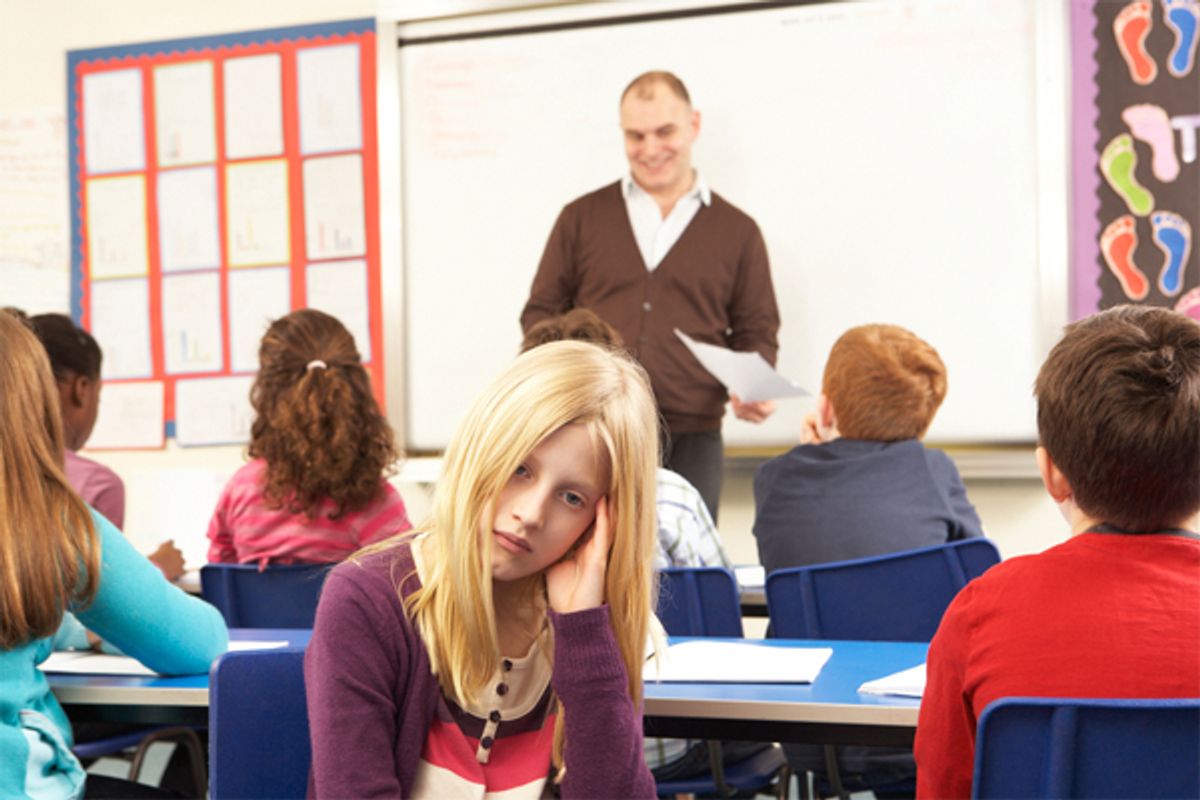 The Shock Doctrine, as articulated by journalist Naomi Klein, describes the process by which corporate interests use catastrophes as instruments to maximize their profit. Sometimes the events they use are natural (earthquakes), sometimes they are human-created (the 9/11 attacks) and sometimes they are a bit of both (hurricanes made stronger by human-intensified global climate change). Regardless of the particular cataclysm, though, the Shock Doctrine suggests that in the aftermath of a calamity, there is always corporate method in the smoldering madness - a method based in Disaster Capitalism.

Though Klein's book provides much evidence of the Shock Doctrine, the Disaster Capitalists rarely come out and acknowledge their strategy. That's why Watkins' outburst of candor, buried in this front-page New York Times article yesterday, is so important: It shows that the recession and its corresponding shock to school budgets is being  used by corporations to maximize revenues, all under the gauzy banner of "reform."

Some background: The Times piece follows a recent Education Week report showing that as U.S. school systems are laying off teachers, letting schoolhouses crumble, and increasing class sizes, high-tech firms are hitting the public-subsidy jackpot thanks to corporate "reformers'" successful push for more "data-driven" standardized tests (more on that in a second) and more technology in the classrooms. Essentially, as the overall spending pie for public schools is shrinking, the piece of the pie for high-tech companies -- who make big campaign contributions to education policymakers -- is getting much bigger, while the piece of the pie for traditional education (teachers, school infrastructure, text books, etc.) is getting smaller.

The Times on Sunday added some key -- and somehow, largely overlooked -- context to this reportage: namely, that the spending shift isn't producing better achievement results on the very standardized tests the high-tech industry celebrates and makes money off of. "In a nutshell," reports the Times, "schools are spending billions on technology, even as they cut budgets and lay off teachers, with little proof that this approach is improving basic learning."

The paper adds that the successful "pressure to push technology into the classroom without proof of its value has deep roots" going back more than a decade, which raises the fundamental question: Why? Why would this push be so successful in changing education policy if there is little hard evidence that it is the right move to improve student achievement?

The answer goes back -- as it so often does -- to corporate power and the Shock Doctrine.

Tech companies give the politicians who set education policy lots of campaign contributions, and in exchange, those politicians have returned the favor by citing tough economic times over the last decade as a rationale to wage an aggressive attack on traditional public education. That attack has included everything from demonizing teachers; to siphoning public money to privately administered schools; to funneling more of the money still left in public schools to private high-tech companies.

This trend is no accidental convergence of economic disaster and high-minded  policy. On the contrary, it is a deliberate strategy by corporate executives and their political puppets, a strategy that uses the disaster of recession-era budget cuts as a means of justifying radical policies, knowing that the disaster will have shellshocked observers asking far fewer questions about data and actual results. As the Times  sums it up, the recession's "resource squeeze presents an opportunity" for corporate interests.

Or as Watkins explains, social pain is an opportunity: "Let's hope the fiscal crisis doesn't get better too soon. It'll slow down reform."

For sheer weapons-grade assholishness, Watkins' publicly wishing for a crushing recession to continue ranks up there with such gems as "bring them on" and "let them eat cake."

However, the real news here is that a Disaster Capitalist has spoken the unspoken and clearly articulated the Shock Doctrine in all its hideous glory. In this case, he has told us what the "reform" movement to demonize teachers, undermine public education, and generate private profits from public schools is really all about: It is about using the shock of a fiscal crisis to enact a radical, unproven but highly profitable agenda that corporate forces fully know they cannot pass under non-emergency circumstances, when objective scrutiny would be much more intense. Indeed, corporate "reformers"are so reliant on the Shock Doctrine to glaze over uncomfortable questions about their agenda, that they are now praying that the shock of recession continues.

Karen Cator, director of the office of educational technology in the United States Department of Education, said standardized test scores were an inadequate measure of the value of technology in schools. Ms. Cator, a former executive at Apple Computer, said that better measurement tools were needed but, in the meantime, schools knew what students needed.

"In places where we've had a large implementing of technology and scores are flat, I see that as great," she said. "Test scores are the same, but look at all the other things students are doing: learning to use the Internet to research, learning to organize their work, learning to use professional writing tools, learning to collaborate with others." (emphasis added)

Cator, of course, is making the argument that supporters of traditional public education have been making against corporate "reformers" for years -- namely, that standardized tests cannot be the primary tool to measure overall educational achievement, because they do not measure other equally important skills. And the fact that she is selectively making it in defense of her former technology industry tells us a lot about how public policy is really made in America.

In this oxymoron, we see who the corporate "reformers" in government really believe they work for, and whom they shape public policy on behalf of. It's not the average parent or student or voter. It's the Disaster Capitalists, who now have their sights set on your local schoolhouse.

Note: Steven Brill, the author of the new book "Class Warfare," and Dana Goldstein, the Nation magazine's education reporter, will be debating these and other education issues on my KKZN-AM760 radio show at 9 a.m. ET on Sept. 7. Stream it live or podcast it at sirota.am760.net.