Why Soulja Boy shouldn't be sorry

Soulja Boy backs off after dissing the military, but it's the rash of knee-jerk apologies we should be sorry for 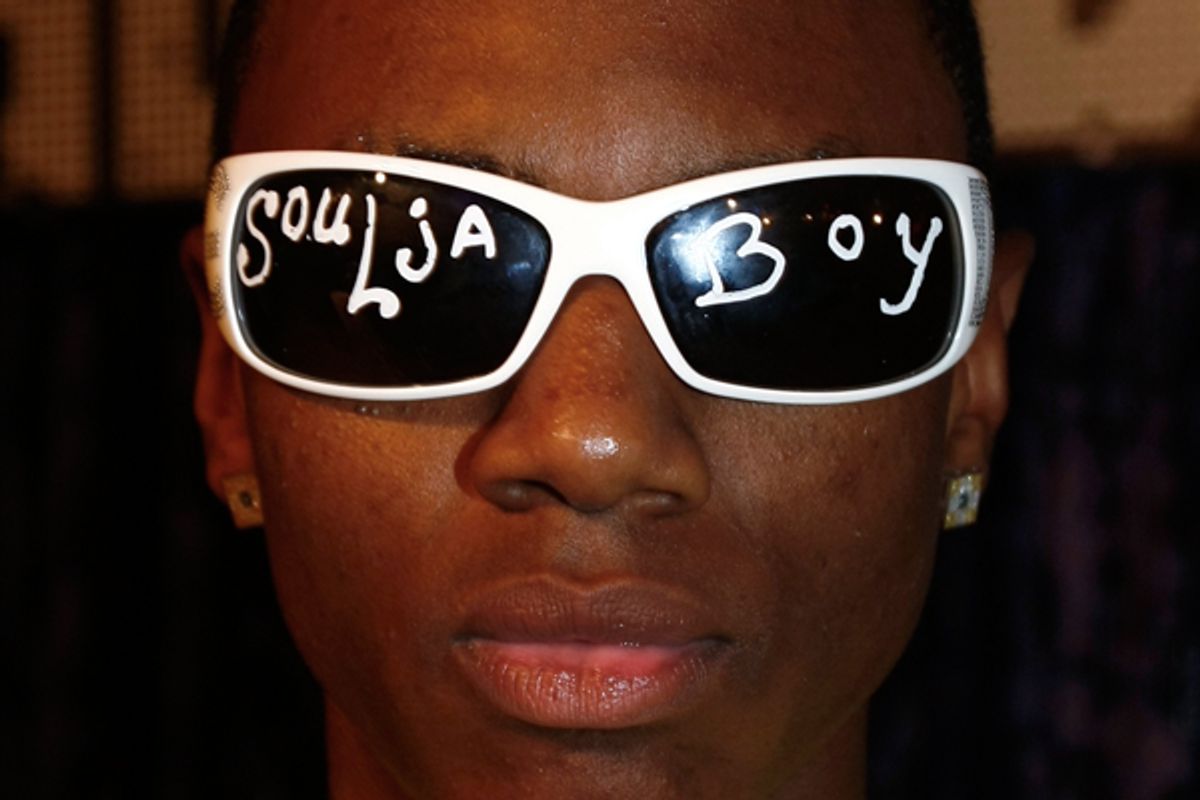 Soulja Boy is very, very sorry. Ever since his song "Let's Be Real," with its plea to "Fuck the FBI and the Army troops … fighting for what? Be your own man," dropped over Labor Day weekend, the 21-year-old has been scrambling to do damage control. First, L.A. County veterans advisory commissioner Fred A. Flores told TMZ that "He should apologize to ALL armed forces." Then, aspiring rapper and combat vet Sgt. Dunson retorted with an online petition to stop the sales of Soulja Boy merchandise and crafted a musical reply, "Change Your Name." Sample lyric: "You ain't no fuckin' soldier, boy." (The rapper's real name is DeAndre Cortez.)

Faced with a sudden deluge of protest from disgusted military families demanding he should apologize for his actions, Soulja Boy did just that. His management insists he now won't be including the track on his upcoming album "Respect My Hustle,"  and they've been busily trying to scrub the video from the Internet.

On Tuesday, Soulja Boy made the compulsory tweet of contrition, saying, "I respect the US and the soldiers. I don't respect innocent lives being taken. I love you all. very deeply sorry of those who took offense." He then went further, with a lengthy -- and seemingly heavily publicist-tinged -- "sincerest apology to all members of the United States military services, as well as their families that were offended by my most recent lyrics." Though he explained that "I am just frustrated that we haven't been able to bring you all home quick enough and my frustration got the best of me," he insisted that "not only did my words come out wrong, I was wrong to even speak them."

And that's the truly offensive part of the story. The guy's now so cowed he has to whimper that it was wrong to "even speak" something disrespectful to the troops? Seriously? Coming so soon on the heels of  Tyler Shields issuing a big "I'm sorry" after releasing images of a beautifully bruised-up Heather Morris and Brett Ratner's backpedaling of a "seizure boy" joke in "Tower Heist," it's safe to say that sorry no longer seems the hardest word. Instead, it's fast becoming the most promiscuously deployed one in the English language. And subsequently, the most meaningless.

Genuine contrition for a legitimately insensitive -- and often spur of the moment -- bad decision is always welcome. But there's a difference between realizing that getting drunk and going on a Twitter rant is a terrible idea, or admitting that you've got to work on your thoughtless, flippant homophobia, and simply backpedaling on a project that clearly took plenty of time, thought and collaboration to put together. The whole, "Oh my gosh! I guess I hadn't realized!" shtick doesn't ring sincere. It reads more like an acknowledgment that your audience didn't like your concept than a true reconsideration of your statements. Surely an artist can clarify a position -- like his frustration over a war -- and decide he should never have piped up on the subject at all. But they're called guns. Maybe people could try sticking to them. Otherwise, it just looks like the mumbled "My bad" of a kid who's been called to the principal's office.

Likewise, there's a difference between a cheap, offensive stunt that merits legitimate criticism and a viewpoint that's challenging or difficult for audiences to accept. If you try to foist a sexist ad campaign on consumers, or you have an exclusionary dress policy at your theme park, you may owe a few mea culpas.

If, on the other hand, you're expressing something conflicted and complicated that's possibly dark and angry, well, guess what? That comes with the territory of most creative endeavor. Not everybody will like it when you say "Fuck tha police" or let your kids read "The Hunger Games." People may not find your jokes about abortion, starvation and terrorism hilarious.  They may be unmoved by your poem to "Tell the law, my Uzi weighs a ton." That doesn't mean they should tell you to stop -- or that artists should immediately back down.

We as consumers have every right not to patronize any artist or institution whose message insults us or conflicts with our values. We don't, however, have the right to expect an apology every time someone presents a viewpoint that's harsh or critical. The real smell test is whether the joke is funny, whether the song is meaningful, whether the image is arresting. It's not whether it pleases everybody. And when it comes to free expression, an epidemic of knee-jerk apologies makes for a pretty sorry state of affairs.