When the system was "blinking red"

In the summer of 2001, the U.S. was listening in on 9/11 mastermind Khalid Sheikh Mohammed speaking in code 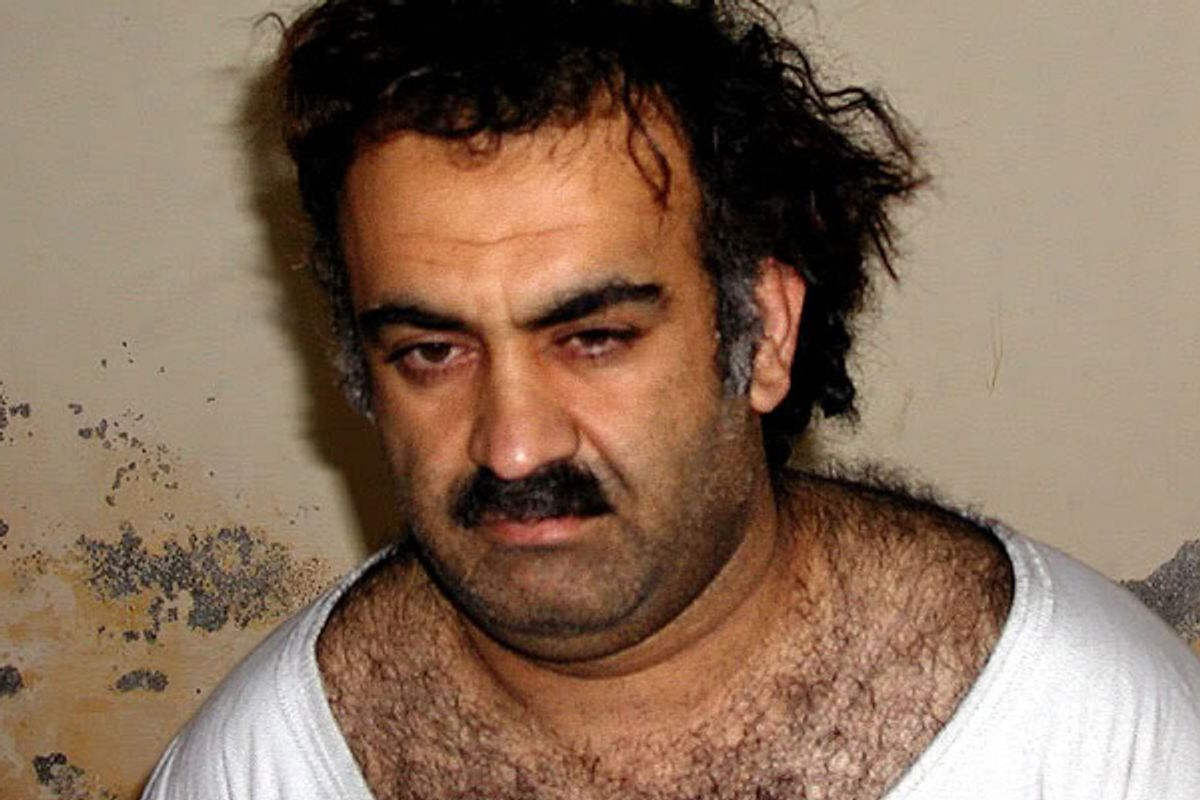 Two sentences in a 9/11 Commission document, previously withheld from the public but released in recent weeks, offer a tantalizing glimpse of a nugget of intelligence that has long been concealed from the public. The sentences read:

They used the codewords Teresa and Sally."

Those 19 words, seen now for the first time, indicate that -- just seven weeks before the attacks -- a Western intelligence service intercepted a coded phone call between two key 9/11 conspirators. The words now released appear in a three-page memorandum, in a passage describing an exchange between KSM -- self-confessed 9/11 mastermind Khalid Sheikh Mohammed -- and Ramzi Binalshibh, his go-between to the terrorists preparing the operation in the States. The pair discussed -- improbably -- sending "skirts" to "Sally."

"Skirts," according to the document, was a reference to money. "Sally," the designated recipient, was their accomplice Zacarias Moussaoui, the would-be hijacker pilot apprehended before 9/11 for behaving suspiciously at a flying school -- and since convicted and sentenced to life in prison. "Teresa," investigators thought, referred to Ziad Jarrah, who was to pilot a hijacked airliner on 9/11 but who -- the conspirators feared for some time -- might drop out of the operation.

It is not the detail of the exchange between the plotters that is striking today, though, so much as the revelation that someone from a Western intelligence agency was eavesdropping on it. The two telltale sentences, released to us by the National Archives shortly before publication of our book "The Eleventh Day," throw up new questions about the intelligence failures that culminated in the 9/11 attacks. The conversation was captured in summer 2001, when, in the words of then CIA Director George Tenet, "the system was blinking red."

The document illuminates the intelligence failure that culminated castastrophically on Sept. 11. Which intelligence service tapped the call? The Commission document does not say, but the agencies most likely to have made the intercept are those of the United States or Germany. While KSM was almost certainly in Afghanistan on July 20, Binalshibh is believed to have been in Hamburg.

If the conversation was intercepted by the Germans, did they share it in timely fashion with their American counterparts? Whichever country's service made the intercept, was work done promptly to translate it or figure out what it might mean? Was it apparent that the exchange related to terrorism, and if so what was done about it?

KSM had been a wanted man since as early as 1996, when he had been indicted for his role in a plot to blow up airliners -- an early concept of his that foreshadowed 9/11. Binalshibh functioned in Hamburg as a part of a known jihadist group that had come to the attention of German intelligence as early as 1999.

In June 2001, the month before the intercepted call with Binalshibh, a CIA cable from the field reported that a "Khaled" was "actively recruiting people to travel ... including to the United States where colleagues were reportedly already in the country to meet them, to carry out terrorist-related activities for bin Laden." Weeks later, just before the intercept that is the focus of this article, "Khaled" was identified as KSM. The information in that cable from the field was of course almost precisely accurate.

Can it be that the July 20 Binalshibh-KSM intercept was made by the Germans, shared with the CIA -- and became part of the skein of intelligence that so alarmed U.S. intelligence officials in the summer of 2001? If recognized as a terrorists' conspiratorial communication, the July 20 intercept could conceivably have begun a series of steps leading to the core of the plot.

An official of Germany's federal intelligence service declined to comment on possible pre-9/11 monitoring of the terrorists or on the relations with U.S. intelligence agencies. The then and now deputy chief of domestic intelligence in Hamburg, Manfred Murck, told us last week that it was not his Hamburg regional agency that intercepted the Binalshibh/KSM call. The last contact his service had with U.S. officials relevant to 9/11 individuals and issues, he added, had been two years before the attacks.

"Some countries," a 9/11 Commission staff statement stated tartly, "did not support U.S. efforts to collect intelligence information on terrorist cells in their countries ... This was especially true of some of the European countries." The report of Congress's Joint Inquiry, whose mandate it was to investigate the intelligence community's pre-9/11 performance, stated that pressure had been brought on "foreign authorities" to target radicals in Germany but that "it became apparent only after September 11, 2001 that the foreign authorities had been watching some of those persons before that date."

The former U.S. deputy head of mission in Berlin Michael Polt, however, told the 9/11 Commission that his impression was always that "our level of interaction with counterterrorism and cooperation with the Germans was extremely high and well coordinated ... the reason the Germans would want to share those concerns with us [was] because they were expecting from us some information that they could use to go after these people."

If the July 2001 intercept of the Binalshibh/KSM call was not made by a German agency, the most likely other service to have either made it or been privy to it is America's National Security Agency, whose remit includes the collection of telephonic traffic. Whether by eavesdropping on Osama bin Laden's satellite phone, while he still risked using one, or by picking up calls between al Qaeda associates, the NSA had been listening in on the terrorists for years.

There appears, 9/11 Commission records show, to have been concerns within the NSA about its pre-9/11 performance. Toward the end of her interview with Commission staff, a former NSA chief of counterintelligence said worried agency staff "thought they might have been guilty of missing 'warning' information." For that reason, she added, the NSA had done "a 9/11 retrospective [REDACTION] to insure they knew everything they had."

Miles Kara, an analyst for Congress' Joint Inquiry, spent dozens of hours reviewing the Retrospective. Kara, himself a former senior intelligence officer, says the retrospective was created at the direction of then Director General Michael Hayden and signed by him. "It was delivered to us in a binder," Kara recalls. "It was created to put in one place everything the agency knew about the warnings leading up to the attack ... It sought no conclusions or inferences, it was simply a compilation of primary source (intercepted traffic) information."

Asked specifically whether he remembered reference to a July 20 intercept, Kara could say only that "the 'Sally' and 'Teresa' language sounds familiar." Asked whether the retrospective included intercepts made by agencies other than the NSA, he recalled that there had been some foreign input, but could not specifically recall whether it had included German traffic.

"Nothing I've dredged up from my memory," Kara concluded, "inclines me to support a real-time understanding [by NSA]."

No "real time understanding," for those familiar with the language of intelligence, suggests the possibility that the NSA did not realize that it had drilled into the mother lode -- KSM passing orders to the men who would become hijackers. Almost two months before 9/11, U.S. intelligence may have had in its hands the treasure the intercept represented -- and simply not understood what it was.

Anthony Summers and Robbyn Swan are the authors of "The Eleventh Day: The Full Story of 9/11 and Osama bin Laden," published by Ballantine.