The GOP's celebration of Rick Perry's record prompts outrage -- but where was the anger over bin Laden's death? 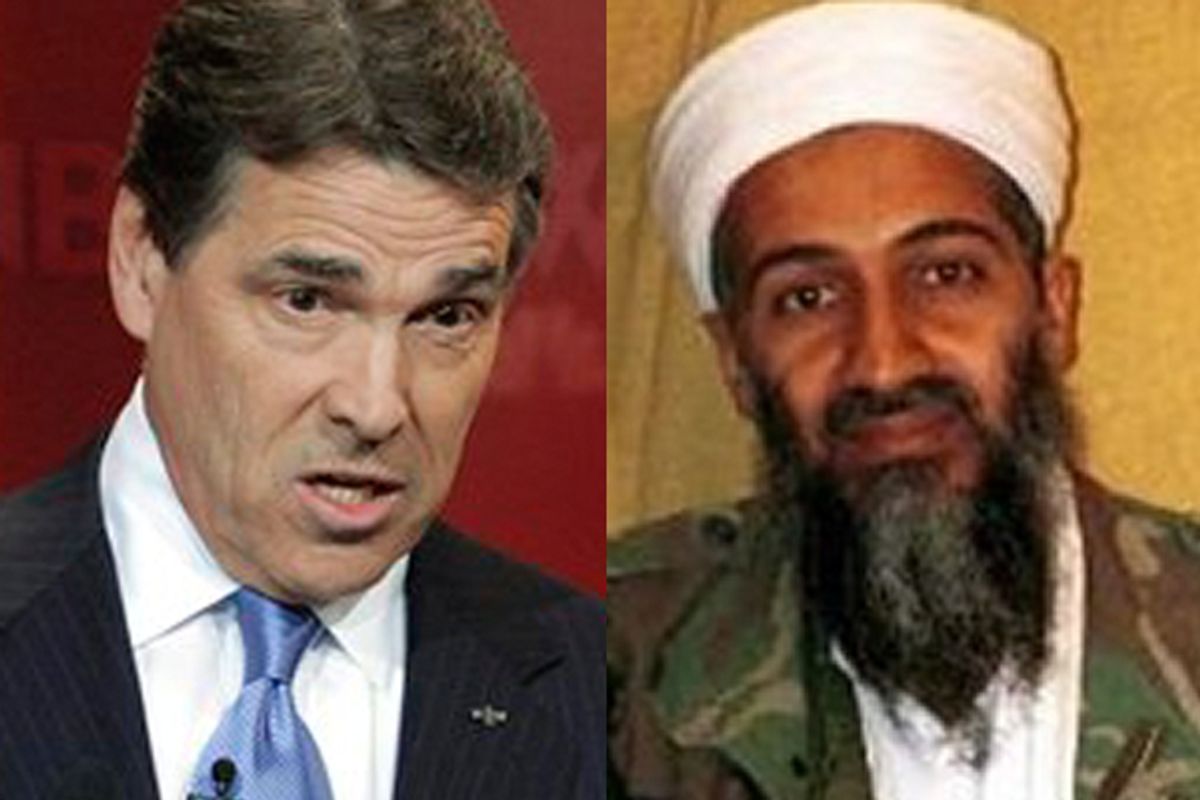 At last night's GOP debate, Texas Gov. Rick Perry was asked by Brian Williams about the 234 executions of death row inmates over which Perry has presided -- "more than any Governor in modern times"-- and the mere mention by Williams of this morose record triggered an outburst of cheering and applause from the audience:

This episode is creepy and disgusting, though as both Ta-Nehisi Coates and Dahlia Lithwick point out, it's hardly surprising for a country which long considered public hangings a form of entertainment and in which support for the death penalty is mandated orthodoxy for national politicians in both parties.  Still, even for those who believe in the death penalty, it should be a very somber and sober affair for the state, with regimented premeditation, to end the life of a human being no matter the crimes committed.  Wildly cheering the execution of human beings as though one's favorite football team just scored a touchdown is primitive, twisted and base.

All of that would be true even if the death penalty were perfectly applied and only clearly guilty people were killed.  But in the U.S., the exact opposite is true; see here to read about (and act to stop) a horrific though typical example of a very likely innocent person about to be executed by the State of Georgia.  That Perry in particular likely enabled the execution of an innocent man -- as well as numerous other highly disturbing killings, of the young and mentally infirm -- makes the cheering all the more repellent.  That the death penalty in America has long been plagued by a serious racial bias makes it worse still.  That this death-cheering comes from a party that relentlessly touts itself as "pro-life" and derides the other as The Party of Death -- and loves to condemn Islam (in contrast to its war-loving self) as a death-glorifying cult -- only adds a layer of dark irony.

This happened at a GOP debate, involving the current GOP front-runner, and progressives are thus rushing forth to condemn it (condemnations with which I largely agree). The Philadelphia Daily News' Will Bunch called it "utterly sickening" and "a pathetic new low in American politics."  Bunch added: "What you heard echoing in the Reagan Library last night was not reason. It was bloodlust, pure and simple, and it was repulsive."  That's because "the cheering of executions is the hallmark of a sick society -- one that's incapable of tackling its real demons and looking for vengeance on whomever happens to be available."

Yes, the 9/11 attack was an atrocious act of slaughter; so were many of the violent, horrendous crimes which executed convicts unquestionably (sometimes by their own confession) committed.  In all cases, performing giddy dances over state-produced corpses is odious and wrong.

Now that this issue has been vested with a partisan angle, and many Good Progressives are marching forward to condemn the act of ecstatically cheering for executions, perhaps the reservations many of us had over the joyous, chest-beating street celebrations over bin Laden's corpse can be better understood.  Like drenching a citizenry with fear and keeping them in a state of Endless War for more than a decade, training them to publicly rejoice when the Government puts bullets into people's heads or injects poison into their veins -- even if that act is justifiable -- inevitably degrades the citizenry and the character of their nation.

UPDATE: Does anyone doubt that many of the same Democrats expressing disgust this morning at the Republican cheerleading for Rick Perry's executions (of people convicted of crimes after at least a pretense of due process) will be the first in line raucously celebrating the Democratic President when he finally succeeds in assassinating U.S. citizen Anwar al-Awlaki with no due process at all?