After the attacks, filmmakers tried to distract a divided nation with adventure and fun 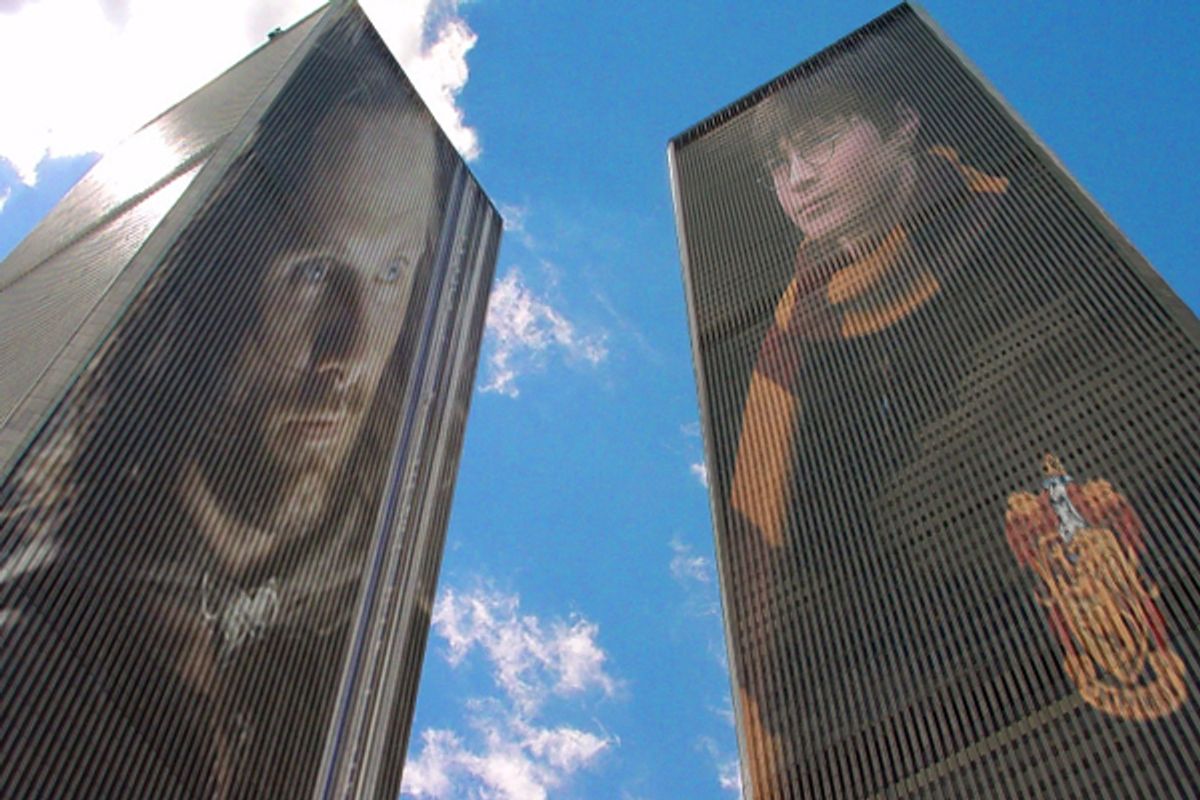 I'm mostly not talking here about current-events dramas that explicitly address 9/11 or its political and military context and effects. Those exist of course, but they're relatively sparse and didn't do especially well. Oliver Stone's "World Trade Center" and "W." seemed like big events at the time but faded quickly, and Paul Greengrass' "United 93," although it was a powerful and widely praised picture, did not attract a large audience. Numerous films have been made about the seemingly endless cascade of overseas wars that followed 9/11, and nearly all of them have been avidly ignored by the public, perhaps for understandable reasons. Even Kathryn Bigelow's "The Hurt Locker" made less money at the box office than any best-picture winner in modern Oscar history.

Notably, there was no particular upwelling of overtly propagandistic or jingoistic chest-thumping cinema, as there had been under Ronald Reagan in the "Top Gun" 1980s. I see two reasons for this. One is that George W. Bush was a uniquely divisive political figure whose presidency was accompanied by a bitter cultural and political schism unmatched in American history since the Civil Rights era, if not the Civil War. (And he's a figure who will cast a longer shadow across that history than seems likely today, I am sad to say.) The second reason, to revert to my original premise, lies in the fact that most big-budget spectacle cinema of the last 10 years has, perhaps unconsciously, involved a mythic celebration and justification of American military power and white supremacy.

I realize that's inflammatory language, and that it sounds like a paranoid Marxist overthinking of recent film history. It's actually somewhat more like a psychoanalytic argument, one that assumes that deeper psychological structures are at work, like tectonic plates, beneath the Hollywood dance of artistic and commercial intentions, collaborative creation, historical context and unintended consequences. When you look at what we might call the big mythological picture, meaning the most successful movies of the last 10 years, I think it becomes a highly plausible interpretation.

Before we go there, let's take a moment to consider the cultural impact of George Walker Bush, whose political career spawned an entire vigorous industry of left-center loathing. I can remember a former Salon editor joking at an editorial meeting that our job was to put Bush on the cover every single day, wearing a pair of devil horns. It wasn't too far from the truth. Certainly many of the same people who hated Bush also hated Reagan (if they were old enough to remember him), but the differences are stronger than the similarities. Reagan was a widely admired and popular president who was elected twice in landslides, however liberals in coastal ghettoes derided him. Setting aside a brief post-9/11 honeymoon, Bush always seemed like a toxic and controversial figure who won two elections by razor-thin margins -- the first of them literally by one vote (that vote being on the Supreme Court).

Right-wingers often make too much of Hollywood's institutional leaning toward the Democrats, but it does exist, and Bush was too polarizing a president to overcome that. Much more to the point, making agitprop movies that embraced the Bush agenda never seemed like a remotely sensible business decision. The public evidently wasn't interested in war pictures or political dramas, wherever they fell on the spectrum, and almost all hit movies ("Passion of the Christ" aside) have to play strongly in major metropolitan areas, exactly where Bush and his wars were least popular. In an age of widespread insider gossip and the collective knowingness of social media, nakedly propagandistic cinema also might have seemed awkward and embarrassing.

So what Hollywood did instead was to make a parade of adventure stories and quest narratives about Everyman underdogs taking on evil, movies that had no overt politics at all and whose origins extended well into the pre-9/11 past. Speaking broadly and in terms of commercial-cultural impact, the last decade has belonged to several different fantasy series: The Harry Potter films, the "Lord of the Rings" films, the "Spider-Man" films and more recently the "Transformers" films. (The decade's other big franchise was "Pirates of the Caribbean," and while it's ridiculous to spend time dissecting them, I think you can stick those movies on that list too, with an asterisk.) Officially, none of those movies had anything to do with 9/11 or its aftermath at all, but on another level they served as crude mass therapy for a nation that had been traumatized, or supposedly traumatized, by a small band of delusional Arab fanatics with box cutters.

(I say "supposedly" because I'm skeptical about the long-term psychological and emotional effects of an event most people outside New York watched on television, in a context that rendered it indistinguishable from the numerous fictional disasters we've all witnessed. The widespread American reaction to 9/11 was something akin to method acting, more like the performance of a life-changing trauma than the real thing. We were supposed to feel terrible, and we did, but maybe not for as long as we pretended to.)

I'm not just talking about the fact that all those movies involve a plucky, likable, Western-identified lone hero taking on a sinister inhuman force that initially appears invulnerable, although that's both highly significant and highly weird. Stories like that are not new, of course, but one of the ways they seemed weird in the post-9/11 context, as various other people have noticed, lay in their distorted and inadvertently troubling mirror image of the real world. If Osama bin Laden had possessed anything like a coherent philosophy, he might plausibly have argued that he was more like Harry Potter or Frodo Baggins, and George W. Bush was more like Sauron or Voldemort. (Then again, if he had possessed a coherent philosophy, he wouldn't have been Osama bin Laden, and anyway he could never have grasped that Dick Cheney was the real undead Nazgûl king.)

Nor do I simply mean that even when the writers and producers and directors of those films weren't thinking about 9/11 at all, marketers and publicists and media commentators were, and often seized upon the movies as collective acts of catharsis. That's exactly what happened with Peter Jackson's "The Fellowship of the Ring," which was completed before the 9/11 attacks but released a few weeks afterward, complete with a newspaper ad campaign that turned a portentous conversation between two of Jackson's central characters into a commentary on the national mood. (Frodo: "I wish the ring had never come to me. I wish none of this had happened." Gandalf: So do all who live to see such times. But that is not for them to decide. All we have to decide is what to do with the time that is given to us.")

I am absolutely not arguing that Harry or Frodo or Peter Parker are crypto-fascist heroes, or that their creators have a hidden agenda that favors endless war and the permanent subversion of constitutional liberties. In fact, I would say that every individual film in those series is completely innocent of any such sinister intention. But I also think it's naive to deny the existence of an overall ideological pattern emerging from Hollywood, whose predominant signal is meant to reassure Americans and other Westerners that they're on the right side of history in a world where such certainty is difficult to find.

Furthermore, I would draw on the arguments of Situationist philosopher Guy Debord's "Society of the Spectacle" and suggest that zillion-dollar blockbuster movies serve not merely as justifications for war but also as metaphors or analogies for war, and as object lessons in how our society functions. Like war, or at least like idealized notions of war, they are hugely expensive productions that epitomize both America's can-do spirit and superior technological might. (Unlike war, expensive Hollywood movies generally turn a profit.)

Even in my paranoid Marxian-Freudian analytical mode, I would agree that as the years have passed the connection between 9/11 and Hollywood's blockbuster films has grown more and more tenuous. Michael Bay's "Transformers" movies have the purported psychological effects of 9/11 way down there in their Neanderthal DNA, but to call them a commentary on anything is laughable. They're primarily Id-fueled celebrations of macho aggression and formalist celebrations of spectacle, freed from any context or content or narrative constraints.

Interestingly, two of the biggest movies of the 2000s that weren't franchise adventure flicks had much more explicit connections to the 9/11 legacy. If the simpering, New Age anti-imperialist politics of James Cameron's "Avatar" -- the highest-grossing film of the decade, and indeed of all time -- suggested that the public had turned away from the Bush doctrine, Chris Nolan's Batman movies, especially the much-debated, billion-grossing "Dark Knight," pointed in quite a different direction. Nolan was accused in some quarters of carrying water for the Bushies, but I never bought that. I think he's much too calculating to have any political agenda, or for that matter any political convictions. He believes in manipulation and duplicity above all else, and "The Dark Knight's" Gotham City is both a classic amoral crime-movie universe and a dark Dick Cheney vision where terror, in both senses of the word, has eaten away all our supposedly cherished liberties.

Nolan and Cameron would of course protest that their worlds are fantasy entertainments, or at most provocative thought-experiments, and that it's us who invest them with political or cultural significance brought from outside. They'd be right, in a way. Hollywood has built its power by creating slippery, symbolic dreams that are dreamed by everyone in the world at the same time, and then assuring us that they mean nothing.