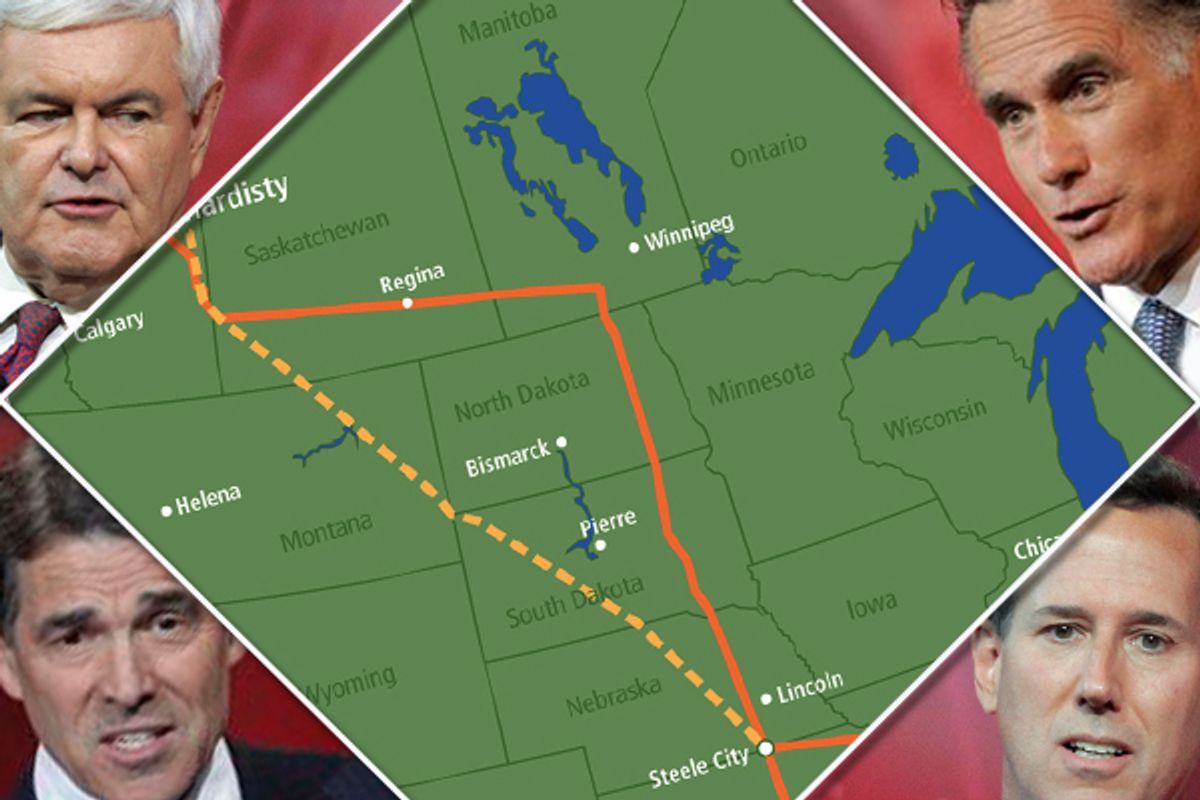 Where do the Republican presidential candidates stand on the biggest environmental issue of the moment?

The proposed 1,700-mile Keystone XL pipeline would connect the tar sands oil of Alberta through the American heartland to the refineries on the Gulf Coast, and it has been the subject of an increasingly high-profile opposition movement in recent weeks. Environmentalists argue that building the pipeline would be akin to lighting the fuse on "the continent’s biggest carbon bomb," not to mention threatening an important source of drinking water, the Ogallala Aquifer. The Obama State Department last month released a report finding the project would have no significant environmental impact, but the administration's final decision on whether to approve Keystone won't come till the end of the year.

The GOP candidates who are on the record on the Keystone project are all supportive. In his economic plan released this week, Mitt Romney addresses the issue twice:

We are already heavily involved in Canadian production and Mexico has recently begun reaching out to foreign partners. As president, Mitt Romney will seek to promote those relationships. In addition to ensuring rapid progress on the Keystone XL Pipeline, a Romney administration will pave the way for the construction of additional pipelines that can accommodate the expected growth in Canadian supply of oil and natural gas in the coming years.

Romney spokeswoman Andrea Saul confirmed to me that "ensuring rapid progress" means that Romney would, as president, give the pipeline the go-ahead.

In the plan, Romney also specifically goes after Obama on Keystone, presaging a possible general election issue if Obama (against the odds) were to block the project. The Romney plan frames it as a U.S. vs. China contest:

[T]he Obama administration has delayed the construction of the Keystone XL Pipeline, which could bring enormous supplies of Canadian oil from Alberta to our market. The project could also create more than 100,000 American jobs. The result is a perverse effect. Canada has considered constructing a pipeline to its Pacific Coast instead, from where it would ship the oil to China. Our failure to move forward as quickly as possible with this project hurts our own energy supply and helps our competitors. The apparent rationale for the Obama administration policy—concern over global warming—is undercut by the fact that the Canadian oil sands will be developed regardless of what we do. The only question is whether the United States or China will be the beneficiary.

Rick Perry, for his part, sent a letter to Hillary Clinton in April urging the administration to approve a permit for the project. The proposed Keystone route would traverse part of eastern Texas. He wrote:

Given the unrest in the Middle East, turning to Canada for a secure oil supply is logical. Keystone XL will transport crude petroleum from the sands of northwest Canada, providing a safer and more reliable supply of oil than the product currently imported from unstable regions of the world. ...

Keystone XL provides job growth completely funded by private sector dollars, a key source of energy from a stable trade partner, new private sector spending and much needed business tax revenue for state and local governments. As such, I urge you to approve a Presidential Permit for Keystone XL as soon as possible.

As for the other candidates, Newt Gingrich's spokesman told me Gingrich supports the project. At an Iowa event in June, Rick Santorum was asked specifically to pledge he would support the project, and after hemming and hawing, he said he would. (There is some evidence that the questioner may have been planted by an oil industry astroturf group.)

Campaigns for other candidates -- Ron Paul, Michele Bachmann and Herman Cain -- did not respond to requests for comment.

But not all elected Republicans support the project.

Just over a week ago, Nebraska Gov. Dave Heineman, a conservative Republican, sent a letter to Obama asking the president to deny a permit for the project, citing the threat to the Ogallala Aquifer:

Of the current proposed route, 254 miles of the pipeline would come through Nebraska and be situated directly over the Ogallala Aquifer.  The aquifer provides water to farmers and ranchers of Nebraska to raise livestock and grow crops.  Nebraska has 92,685 registered, active irrigation wells supplying water to over 8.5 million acres of harvested cropland and pasture. ... This resource is the lifeblood of Nebraska’s agriculture industry. Cash receipts from farm markets contribute over $17 billion to Nebraska’s economy annually.  I am concerned that the proposed pipeline will potentially have detrimental effects on this valuable natural resource and Nebraska’s economy.

This week, Heineman was joined in his opposition by Sen. Mike Johanns, a fellow Republican. On the other side, the powerful Chamber of Commerce launched a new push to convince the administration to OK the project, calling it an economic boon.

So stay tuned, this fight isn't over ...