We refuse to live in fear! 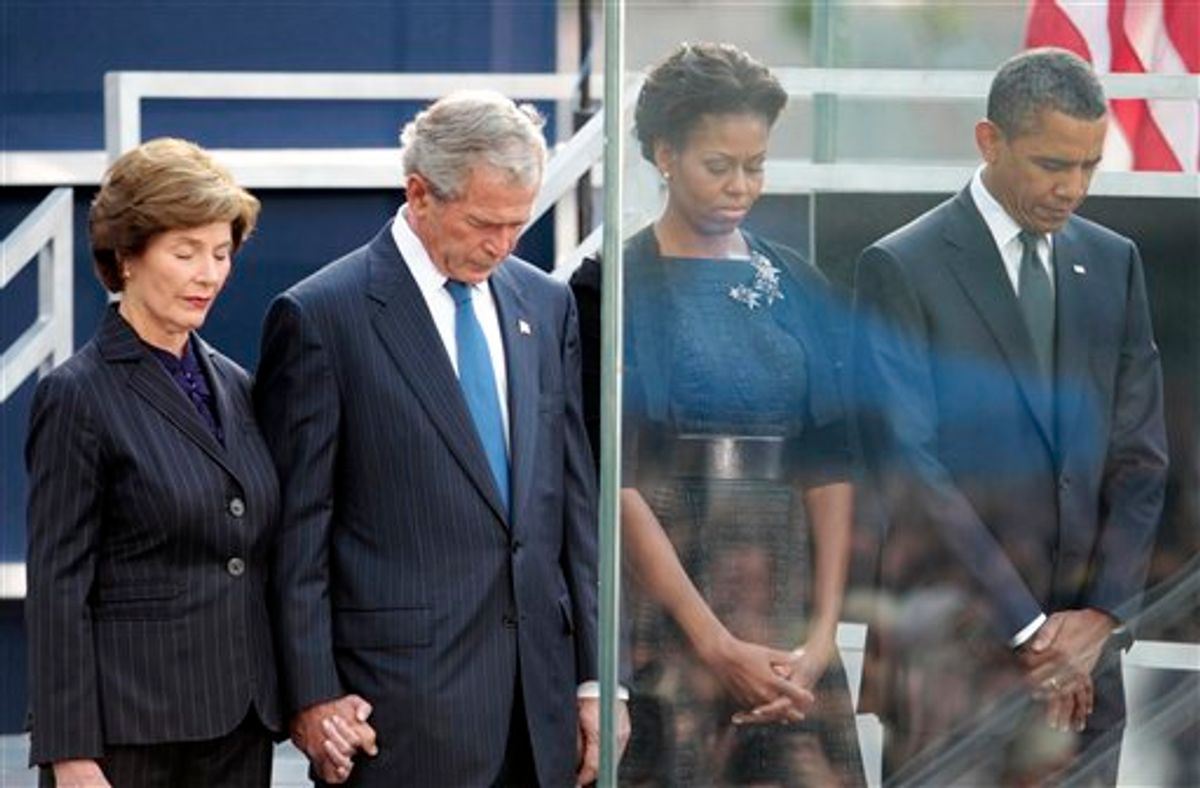 President Obama, in his weekend radio address to the nation:

They wanted to terrorize us, but, as Americans, we refuse to live in fear.

Earlier this year, the Obama White House reversed the Attorney General's decision to try Khalid Sheikh Mohammed for his alleged crimes in a federal court in New York, and Congress prohibited Guantanamo detainees generally from being tried on U.S. soil, due to fears that the Terrorists would use their heat-vision to melt their shackles and escape or would summon their Terrorist friends to attack the courthouse and free them into the community -- even though none of that has ever happened, and even though almost every other country on the planet that suffered similar Terrorist attacks (Britain, Spain, India, Indonesia) tried the perpetrators in their regular courts in the cities where the attacks occurred.  In 2009, President Obama demanded the power to abolish the most basic right -- not to be imprisoned without having been convicted of a crime  -- by "preventively detaining" people who, in his words, "cannot be prosecuted yet [] pose a clear danger."  During the Bush years, The Washington Post quoted a military official warning Americans that the most extreme security measures are needed against Guantanamo detainees because these are "people who would chew through a hydraulic cable to bring a C-17 down."

Meanwhile, America continues to transfer hundreds of billions of dollars to a private Security State industry -- for the most ludicrous security systems -- to turn itself into what Kevin Drum last week called "Fortress America."  Drum quoted from Bob Schieffer's book in which the CBS News host recounts how "the Pentagon, like most of official Washington, was still open to the public in the 1970s.…No one was required to show identification to enter the building, nor were security passes required."  But now, writes Drum:

Ordinary office buildings require IDs before they'll let you in. Taking pictures is a suspicious activity. Airplanes return to the gate because someone in seat 34A got scared of a guy in a turban a couple of rows in front of them. Small children are swabbed down for bomb residue. . . . .

"Some things are obvious: the Capitol Hill police armed with assault rifles, standing on the Capitol steps; concrete barricades blocking the once-grand entrances to other federal buildings; the surface-to-air missile battery protecting the White House; the National Archives security guards, almost as old as the Declaration of Independence enshrined inside, slowly waving a magnetic wand over all who enter. But most of the post-9/11 security measures have simply been embedded in the landscape and culture of the nation's capital.

"From the reflecting pool at the foot of the Capitol to the reflecting pool in front of the Lincoln Memorial, government cameras take pictures of citizens, who smile for Big Brother and snap their own pictures of the government cameras. In the $561 million underground Capitol visitors center, completed in 2008, people clutching gallery passes from a senator's or representative's office are funneled through magnetometers, to witness a secure Congress in its sealed chambers." . . . .

The protective apparatus we've put in place, both the less visible surveillance state and the highly visible security state, will be with us forever. And they'll get worse and worse: If the past decade is any judge, Americans seem willing to put up with an almost unlimited amount of this stuff as long as it's done in the name of protecting us from terrorism. The only thing that's provoked any serious reaction at all has been backscatter scanners in airports -- and not because they represent any kind of real government overreach, but because people have a knee-jerk revulsion to the idea of having "nude" pictures of themselves taken.

That gets us upset. But hundreds of billions of dollars spent to relentlessly harden the routines of our daily lives? Our apparent attitude toward that, to paraphrase our former president, is "bring it on."

But remember: "as Americans" -- rugged, courageous individualists -- "we refuse to live in fear."  Courtesy of The Daily Mail, enjoy some images of 9/11 Day in the Home of the Brave, including some as the President who delivered that stalwart decree spoke to the nation:

Obviously, reasonable security measures -- to protect the President and otherwise -- are perfectly appropriate.  But the very idea that America hasn't been converted into a paramilitarized Nation of Fear is absurd on its face.  Most foreign policy and domestic civil liberties erosions are grounded in little other than that.  Meanwhile, in a New York Times Op-Ed this weekend, Ahmed Rashid describes how rapidly (and predictably) anti-Americanism has grown in Pakistan and Afghanistan over the last several years even among those previously favorable to the United States; perhaps some day we'll make the connection between what we are doing over there and what we consequently do to ourselves at home.