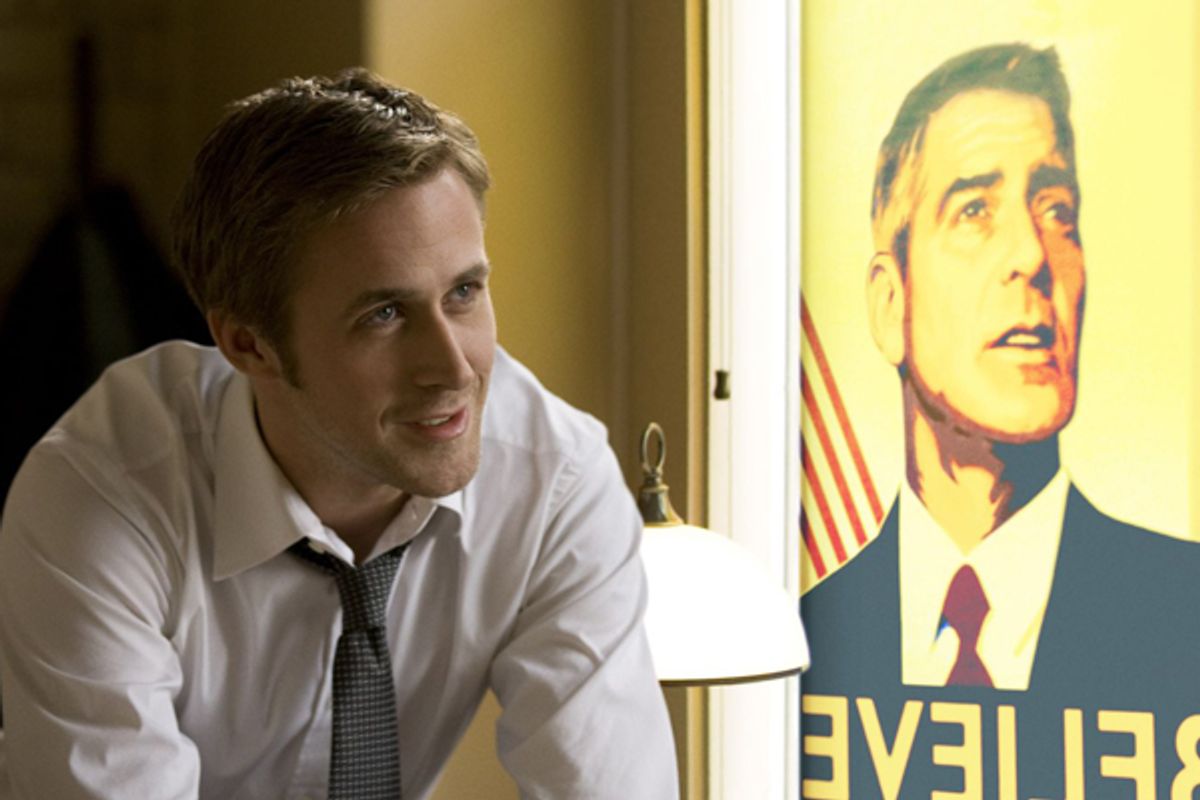 TORONTO -- It was a little disconcerting to attend the North American premiere of George Clooney's "The Ides of March," a theatrical and atmospheric fable of American political corruption, in an enormous theater packed with Canadians. Of course the story of idealism poisoned into cynicism, or the clash of political and philosophical ideas transformed into a game of short-term tactical advantage, is not specific to the United States or to alleged democracies. Clooney's title makes a slightly awkward reference to the assassination of Julius Caesar in 44 B.C., which was in fact an unsuccessful effort to overthrow despotic rule and restore the Roman Republic. Clooney's film (adapted from Beau Willimon's play "Farragut North") depicts a more mundane variety of political coup, but is clearly meant to show a society sliding in the same direction.

This is Clooney's fourth feature as a director, and if he doesn't really have what you'd call an auteur's signature, he's an understated craftsman with good storytelling instincts and an old-style Hollywood desire to let his actors tell the story. "The Ides of March" has been received respectfully here, but not with raves, which partly reflects the downbeat nature of its story and may also have to do with the modest role played by Clooney himself. Once again he casts himself as a supporting character, a cool and cryptic Democratic presidential candidate named Mike Morris, who presents himself as a fire-breathing populist revolutionary in public but maintains a clipped, acerbic distance from even his closest advisors. (Jennifer Ehle, otherwise known as that really terrific actress you can't quite place, has a nice role as his wife.) At first glance, and even at second, Morris is a dream candidate, a sitting governor of Pennsylvania who has balanced the budget and advocates an ambitious program of national renewal: mandatory national service for high-school graduates, balanced with free college tuition and healthcare for all. (He's also an agnostic or atheist who refuses to discuss religion, which may be the most improbable element of all.)

One could compare Morris to various real-life candidates who clearly informed Willimon's play, but that risks revealing important plot points in a movie that won't hit theaters for several weeks. (Clooney co-wrote the screenplay with Willimon and producer Grant Heslov.) Suffice it to say that Morris may not entirely be what he seems to be -- what candidate ever is? -- and in any case he's just an accessory to the moral drama of Stephen Myers (Ryan Gosling), his hotshot 30-year-old media strategist, who has pushed Morris right to the edge of winning the Democratic nomination. Gosling suddenly seems to be everywhere -- in every major film, at every festival, in every gossip item -- and I'm tempted to call him the hottest male star in Hollywood since George Clooney. (His L.A. car thriller "Drive" opens next week, which may be a bigger potential hit than this film.) Certainly "Ides of March" is a fortuitous marriage of actor and director, with Clooney clearing out the middle of the film to let Gosling's natural gravity and watchfulness be the focus.

Yes, he's good-looking too, but Stephen is so devoted to the Morris campaign that he's a distracted playboy at best. He goes to bed with a cute young intern (Evan Rachel Wood) whose name he can't keep straight, but even while they're in the supposed throes of passion Stephen can't keep his eyes off the TV screen, where breaking news might send the Ohio poll numbers ticking up or down. He's ambitious and brilliant, but thinks of himself as a man of principle, who will do anything to help Morris win, but only because the cause is a noble one. Morris is locked in a neck-and-neck contest in Ohio with his last remaining challenger, a senator named Pullman whom we never learn anything about (except that the Republicans think he's more beatable than Morris). In this world of jargon-rich, warlike dialogue and gray, late-spring Cincinnati streets -- it's like an episode of "The West Wing," with more cinema and more cynicism -- Stephen's big crisis blows past so fast, like a truck on the highway, that neither he nor we notice it till it's gone.

Morris' bulldog campaign manager, played by Philip Seymour Hoffman, doesn't trust Stephen, who is younger, better looking and arguably more intelligent, and Pullman's campaign manager (the always enjoyable Paul Giamatti) makes a devious play to lure Stephen to his side, hinting that things he doesn't know about yet will sink the Morris campaign. Throw in Marisa Tomei, looking frumpy for the first time in her career and playing a ruthless New York Times reporter, and it all becomes a baffling, fast-moving game of who's playing whom, and to what ends. Stephen, Morris, the two campaign managers and Wood's 20-year-old intern (her name, which Stephen eventually masters, is Molly) are all plunged down the slippery slope of sleaze and tragedy.

Arguably "The Ides of March" has nothing to say about American electoral politics we don't already know, i.e., the system is broken and those who enter it are soon stripped of their ideals and reduced to viciousness. But as in his McCarthy-era media yarn "Good Night, and Good Luck," Clooney is trying to create stylish, audience-friendly pop entertainment that's also thought-provoking, not to write an essay for Harper's. As a director, Clooney is often compared to Steven Soderbergh, his acknowledged mentor, but I see him shaping into a slightly different kind of artist, part Frank Capra and part Michael Mann. This film may not be quite as distinctive as that one, and it's certainly more pessimistic in tone. But it's another step in the intriguing mid-career reinvention of one of Hollywood's shrewdest stars.

"The Ides of March" will open Oct. 7 nationwide.