How to reason with a politically suicidal base 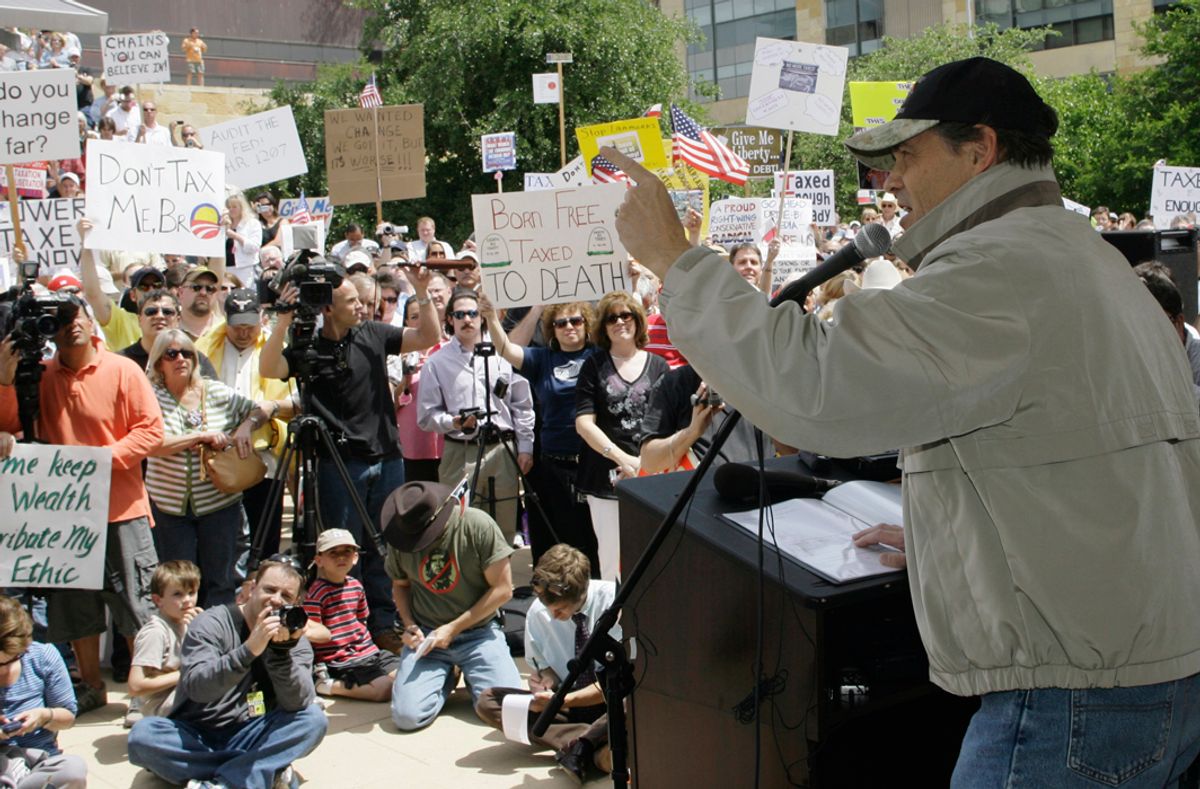 Gov. Rick Perry, right, speaks to the crowd during a "Don't Mess With Texas" tea party rally in Austin, Texas.
--

Republicans who are mainly interested in making sure their party wins the 2012 presidential election would seem to face a Catch-22.

The man who currently leads the GOP race in national polls, Rick Perry, has a history of making reckless and inflammatory statements about Social Security -- enough to raise serious questions about whether nominating him would end up costing the party a handful of potentially critical points in a race against President Obama. But when they raise this concern in public, Republicans run the risk of actually strengthening Perry's bond with the GOP base and making it more likely that he'll emerge as the nominee.

This was one of the takeaways of Monday night's debate, when the live audience -- which was apparently composed largely of Tea Party activists -- practically hissed at Mitt Romney for arguing that Perry had unnerved senior citizens by calling Social Security a "Ponzi scheme," "a monstrous lie," and "a failure" that Americans "have been forced to accept for more than 70 years now." By contrast, Perry's response, in which he took a shot at the New Deal and chastised Romney for "trying to scare seniors," won hearty cheers.

Granted, live debate audiences can be misleading barometers, but it's not unreasonable to think the crowd's reaction was basically representative of where the GOP base is. Three times in the last 16 years Republican efforts to overhaul or radically scale back federal entitlement programs have met stiff resistance from Democrats. And each time -- whether it was with Newt Gingrich's 1995 push to slash Medicare by $270 billion, George W. Bush's Social Security privatization campaign in 2005, or Paul Ryan's recent Medicare voucher scheme -- the public has sided with the Democrats.

This has given the right something of a victim complex, with conservatives convincing themselves that they've been trying to do an honorable thing by facing America's entitlement "crisis" head-on, while Democrats have been interested only in scoring political points with dishonest (but effective) fear-mongering. Rush Limbaugh, in particular, has been sounding this theme for years, which helps explain why (as Greg Sargent noted) he came to Perry's defense even before Monday's debate. It also explains why Perry's insistence during the debate that he's merely trying to be honest about a looming crisis was so well-received by the audience.

You can see the problem here for Republicans. As a story in Tuesday's New York Times makes clear, the party's establishment is well aware of Perry's general election vulnerability on Social Security. But as Romney discovered on Monday night, the Republican base is conditioned to regard the raising of this concern as a "Democrat tactic" -- the sort of thing that's driven them crazy at least since the Gingrich days.

What this means for establishment Republicans is that they'll have to camouflage their attacks on Perry (if they do decide they want to deny him the nomination). His most obvious general election liability also seems to be a primary season asset, but he has his share of primary season liabilities too -- most notably on the HPV vaccine he tried to mandate in Texas and in his support for a state-level version of the Dream Act. As I noted earlier, Perry struggled when the debate turned to these subjects on Monday night.

Ironically, immigration and the HPV vaccine are probably two of Perry's best selling points as a prospective general election candidate. In the fall of 2012, he wouldn't need to apologize to swing voters (as he did to Republican primary voters Monday night) for trying to reduce the incidence of cervical cancer, or for believing that every child who graduates from high school ought to have a fair chance at going to college. These positions would help him combat Democratic efforts to paint him as an extremist ideologue. But within the Republican Party, he's vulnerable on them.

In other words, the best advice for Republicans who fear that Perry may have an electability problem is probably to ignore the issue that would make him the most vulnerable in the fall and to focus instead on two issues that might actually boost his general election chances.