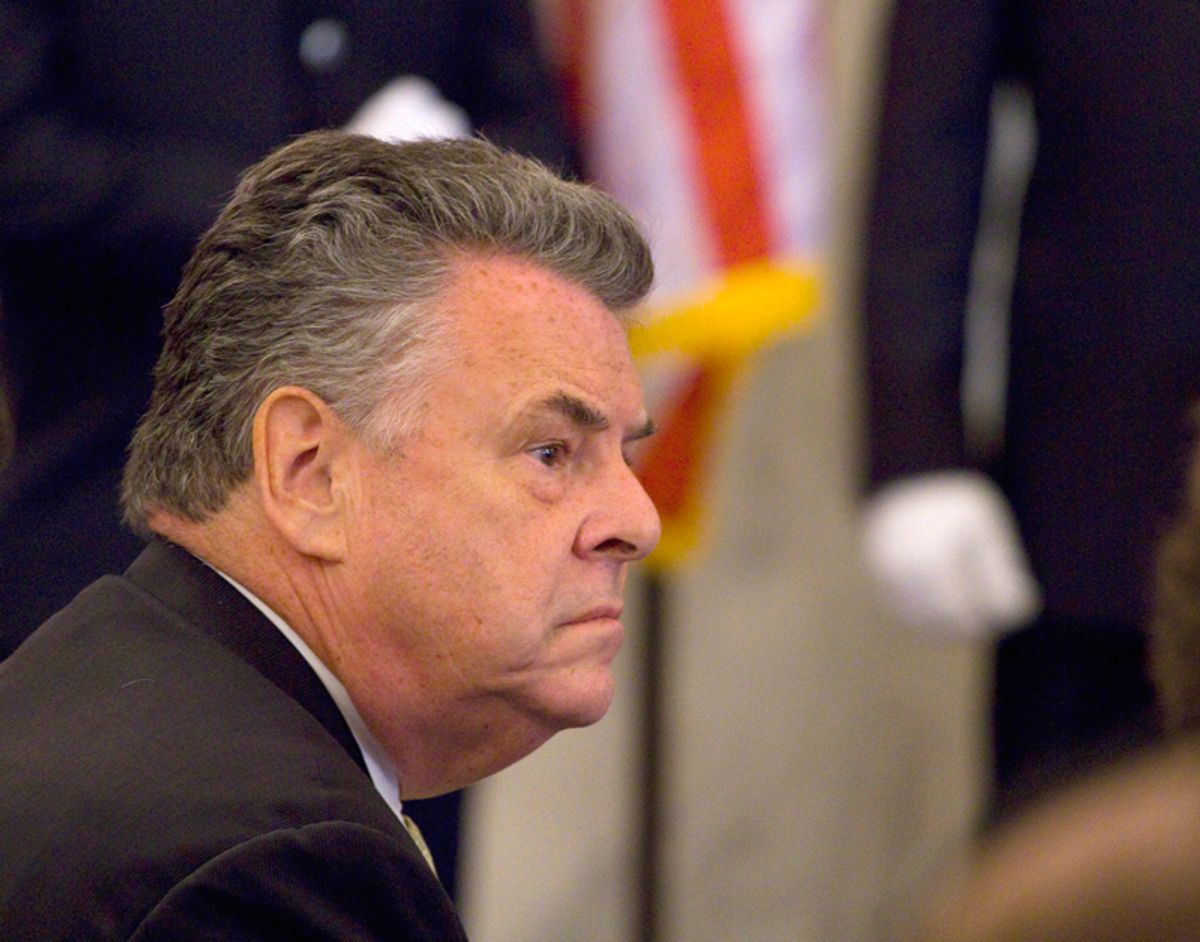 Rep. Peter King (R-NY) stood by his past support for Irish terrorism during an appearance today before a British parliamentary inquiry into the roots of Muslim terrorism.

King, the chair of the House Homeland Security Committee, came under fire as a hypocrite earlier this year when he launched his own hearings into "domestic radicalization" in the American Muslim community. Critics, including a civilian survivor of a 1990 Irish Republican Army bombing in London, called out King for being an unrepentant supporter of the I.R.A. King built his career in the Irish Catholic community of Nassau County as a pro-I.R.A. firebrand in the 1980s, and was even involved with a fundraising organization suspected of providing the militant group with money and weapons.

So it was a bit of surprise when the Home Affairs Committee of the British House of Commons invited King to testify in its "Roots of violent radicalisation" inquiry. Inevitably, King's I.R.A.-supporting past came up.

It was the longtime Labour MP David Winnick, who was first elected to the House of Commons in 1966, who confronted King.

"There's been some surprise in the United States but also in Britain that you have a job looking into and investigating into terrorism," said Winnick. King, the MP added, "seems to be an apologist for terrorism."

Winnick cited a King quote from 1982:

We must pledge ourselves to support those brave men and women who this very moment are carrying forth the struggle against British imperialism in the streets of Belfast and Derry.

If civilians are killed in an attack on a military installation, it is certainly regrettable, but I will not morally blame the I.R.A. for it.

"Do you stand by that?" Winnick asked King.

"I stand by it in the context of when it was said," King responded, without hesitation.

He later added that those quotes were designed to "put [the conflict] in a perspective" for an American audience that was too often exposed to anti-I.R.A. points of view.

He then offered this lengthy defense of the role he played during the conflict in Ireland. Conspicuously missing from it is any denunciation of, or expression of regret for, I.R.A. terrorism.

I stand by it in the context of when it was said. ... I can cite you Tony Blair, as recently as March of this year, put out a long statement defending my record both in the 1980s and throughout the Irish peace process. I was just out in the hallway and Baroness Kennedy came up to me to thank me for the work I did in the Irish peace process. Paul Murphy came by last evening.

What I was saying -- and I stand by it -- is that the situation in northern Ireland -- there were loyalist paramilitaries and obviously Republican paramilitaries -- and I believe that, I had gotten to know Gerry Adams and Martin McGuinness. And I was very confident that if the Republican movement could get to the table, you would see a peace process. And I believe the United States had a very significant role to play as an honest mediator, as an honest broker. And I worked very closely with Bill Clinton, I was very much involved in the Good Friday agreements, I was very involved in getting Gerry Adams' visa, but also involved in getting loyalists into the United States. I felt that when it was on the table, that Adams and McGuinness would be able to, if you will, control the republican movement. And it's worked. Tony Blair said I made invaluable contribution to peace, Bill Clinton has cited me in his memoirs as a person who was very much involved.

It was never my position as an Irish-American, whether or not Ireland was united, to me there were injustices in the north. There were good people on both sides. I spent a lot of time meeting with the loyalist community, the unionist community, at the same time, and I came away from that convinced that there was a role for the U.S. to play. What I was saying with those quotes, I was also trying to put in perspective. All of the quotes were anti-I.R.A. in the United States, no mention [ever] made of the UVF or the UDA or the Red Hand Commandos or whatever. I was trying to put it in a perspective to show that there were people -- that this is not just the terrorist mayhem it was made out to be -- that there were significant leaders on the Republican side.

It's also worth noting here that this year King defended his support for the I.R.A. to the New York Times by claiming that the group had "never attacked the United States. And my loyalty is to the United States." He did not repeat that explanation to the parliamentary committee.

Winnick followed up on the exchange by asking about British use of torture against the I.R.A. being used as a recruiting tool, and whether there is a parallel to post-9/11 U.S. torture policies. King said he did not believe there was.