Ceremonies of this sort aren't "apolitical," as Krugman's critics claim. They're the ultimate propaganda festival 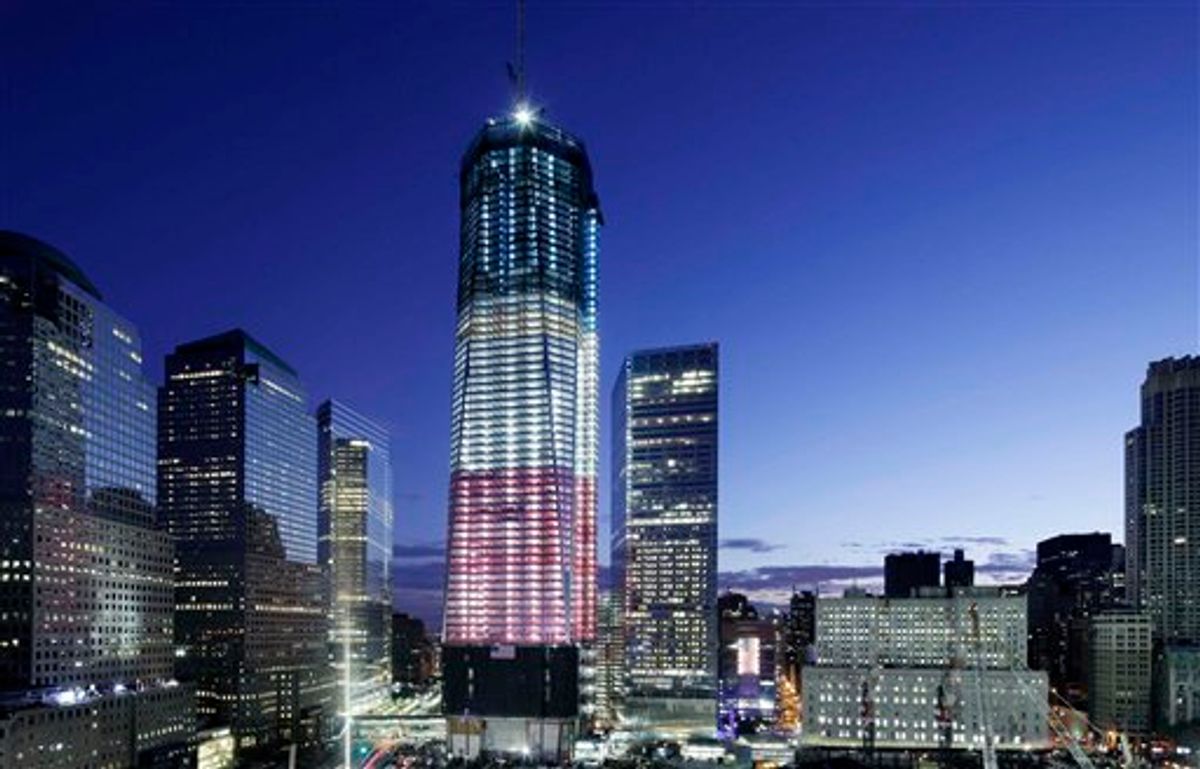 One World Trade Center overlooks the ground zero memorial site, Saturday, Sept. 10, 2011, in New York. Ceremonies will be held at the site Sunday for the 10th anniversary of the September 11 attacks. (AP Photo/Mark Lennihan) (AP)
--

On 9/11 Day, Paul Krugman provoked a wave of petulant, angry condemnation for pointing out just some of the valid reasons that day is now inextricably linked with the shameful acts done in its name by the U.S.  Though I continuously defended Krugman on Twitter, I had no intention of writing about this pseudo-controversy because it was little more than what Digby describes as a standard formulaic "hissy fit" from right-wing warmongers who long ago ceased having the power to stigmatize people for such heresies (the apex of this absurd spectacle occurred when the man widely admired around the world as The Nation's Moral Conscience -- Donald Rumsfeld -- announced that he was cancelling his subscription to The New York Times in protest of Krugman's "repugnant" post).

But then yesterday, I read what is one of the most self-evidently inane posts the Internet has ever produced: this must-be-read-to-be-believed sermon from Mother Jones' Rick Ungar condemning Krugman and demanding that other progressives join with him and the Right in these denunciations.  Just for sheer entertainment, I really encourage you to read the whole thing; my favorite part is when Ungar decrees that 9/11 Day is "a day when Americans of all stripes should have been giving thanks to both President Bush and President Obama for doing whatever it is they do that has protected us from a tragic repeat of the events of September 11, 2001."  On so many levels, that's just the funniest sentence ever (and we now bow our heads in reverent gratitude toward our Leaders, George Bush and Barack Obama, and solemnly thank them for doing whatever it is they do  -- no matter what that might be -- to Keep Us Safe).

But there is a point raised by Ungar's finger-wagging that I do actually think is worth addressing.  He writes that while he agrees with the substance of Krugman's criticism, it was his timing that was so offensive, because 9/11 Day "was decidedly not a day that needed to be about politics."  This notion -- that 9/11 Day was nothing more than an apolitical grieving ceremony, akin to a private funeral, and Krugman's sin was one of etiquette: it just wasn't the day for politics -- is a common one.  But it's completely wrong, and quite destructive to accept.

Everything about 9/11 Day -- like all political rituals -- was deeply politicized to its core.  It was imbued with political meaning, political messaging, and controversial claims, both implicit and explicit.  Almost every speech given that day made claims about the meaning and "legacy" of 9/11, what caused it, and what the nature of the American response was.  President Obama proclaimed that "our character as a nation has not changed," that "these past 10 years have shown that America does not give in to fear," that "these past ten years have shown America's resolve to defend its citizens, and our way of life," and that "these 10 years have shown that we hold fast to our freedoms."  Vice President Biden boasted that "The terrorists who attacked the Pentagon . . . sought to weaken America . . .  But they failed," and that Al Qaeda "never imagined the sleeping giant they were about to awaken."  Those are all highly politicized claims. I happen to disagree with each of them.  Others of course agree.  But there's no denying that all of that -- and much more in those speeches -- is consummately political.

Not just 9/11 Day but everything connected to it was constructed to deliver and implant a very politicized message, over and over.  Consider this email I received from a friend in South Florida after he attended an NFL football game last night in Miami:

Let me describe the patriotic display at last night's NFL opener. Men with machine guns at all entrances, to scare off the terrorists. Pat down on the way in, to make sure [my wife] and I weren't carrying plastic explosives. A moving national anthem with troops out on the field spelling out U.S.A. A moving tribute to the thousands who perished in 9/11 and to our nation's brave response to that atrocity (which was, of course, the worst thing that ever happened in the history of the world). A U.S.A., U.S.A. chant. Then a Stealth B2 Bomber flew over the stadium, followed by fireworks. At half time, a US Army paratrooper squad jumped out of a plane and landed on the field. Maybe next week they'll shoot some missiles from unmanned drones.

Does anyone want to claim with a straight face that these ceremonies are apolitical, devoid of political messaging?  Everything about 9/11 -- how it's talked about, how it's described, how it's commemorated -- is all designed to impart very specific political messages, and that's been true since the day it happened.

In fact, literally countless writers other than Krugman seized on 9/11 Day to make very politicized points.  Here, for instance, is The Atlantic's Jeffrey Goldberg, from his lead essay in his magazine's special 9/11 Anniversary issue:

What we saw on the morning of Sept. 11, 2001, was evil made manifest. The terrorists who attacked the World Trade Center and the Pentagon (and tried to destroy the Capitol) claim to have been motivated by a theology of restoration -- a dream of restoring Islam to a position of global supremacy - and by the politics of grievance. . . . The souls of men like Mohamed Atta and Khalid Shaikh Mohammed and Osama bin Laden are devoid of anything but hate, and murder is what erupted from these voids. . . .

Westerners are gifted in the art of slashing self-criticism, and so much of our discussion about 9/11 in the intervening years has centered on our failures . . . The mistakes we made were sometimes terrible (and sometimes, as at Abu Ghraib and in the CIA's torture rooms, criminal) but they came about in reaction to a crime without precedent.

When we made our "mistakes," we were merely responding to "a crime without precedent."  "A crime without precedent."  That's written by a person who not only joined a foreign army that spent years (both before 9/11 and after) killing civilians in all sorts of gruesome ways with the multi-layered help of the U.S., but who also played a lead role in enabling a war of aggression that killed (at the very least) one hundred thousand innocent Iraqis, a war about which Christian Science Monitor's Dan Murphy observed (on 9/11 Day):

The very idea that 9/11 was a "crime without precedent" is as politicized a claim as it gets, as is the notion that our (much more pervasive) slaughter is well-intentioned and noble while theirs is "evil incarnate."  That's particularly true when such claims emanate from someone with a history like Jeffrey Goldberg (his fellow Iraq War cheerleader, Christopher Hitchens, also exploited 9/11 Day to make similar self-justifying claims). Agree or disagree with their claims, no reasonable person can deny that they are exploiting this occasion to advance a slew of political beliefs.  And that's what was done over and over in the days leading up to 9/11 Day and on the day itself:  hordes of writers, pundits, and politicians politicizing the day as much as possible to depict the U.S. and their own favored policies in the most favorable light possible.

Yet nobody criticized Goldberg, Hitchens, or, for that matter, Obama and Biden for using 9/11 Day to advance political claims.  That's because nobody -- least of all those shrieking about Krugman's "impropriety" -- believes that 9/11 Day is meant to be apolitical.  They know that it's deeply political -- primarily political -- and want it to be that.  That day has became so important precisely because it enables all sorts of consequential messages to be delivered -- about the U.S., its role in the world before 9/11 and after, who is Good and Evil, the need for our Endless Wars and Surveillance State -- all with a very emotional punch backing them up: the emotions prompted by the attack that are exploited to reinforce those messages and place them beyond the realm of questioning for decent people.

Krugman's sin wasn't that he inappropriately politicized what was otherwise an apolitical day.  His sin was the opposite.  He deviated from the approved, mandatory political script for that day: by pointing out that it isn't only the Terrorists but also ourselves who engaged in deeply shameful crimes.  He didn't politicize an apolitical day; to the contrary, he subverted the most politically propagandistic day that now exists in American political culture.  It's unsurprising that the American Right wants to demonize him for that; they've long viewed themselves as the Owners of 9/11 who, as such, can dictate how we talk about that event.  But to watch a writer at a liberal journal demand that progressives join in the bashing -- based on this blatantly false pretense that these types of propaganda rituals are devoid of politics -- was ultimately too extreme to ignore.