"The Descendants": Clooney's Oscar-worthy role as a Hawaiian dad 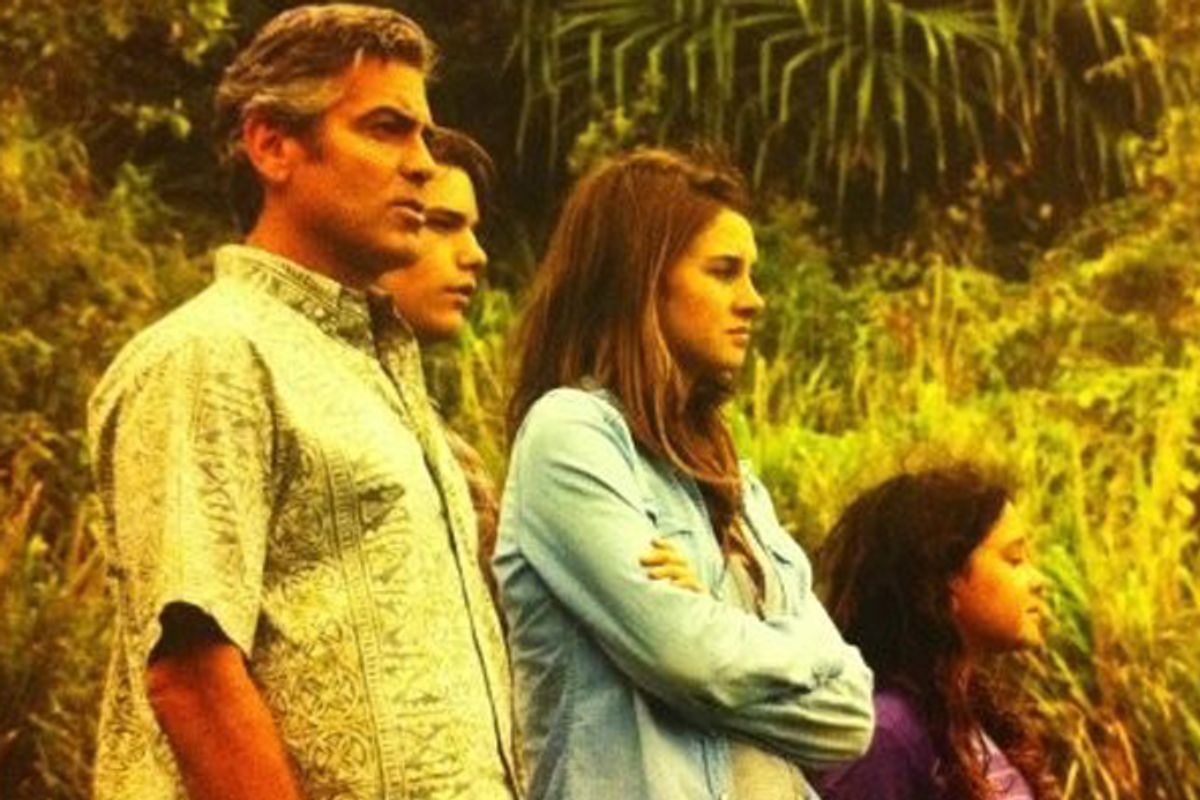 A still from "The Descendants"
--

TORONTO -- More of a muted, bittersweet Hawaiian-themed cocktail than a masterful cinematic experience, Alexander Payne's new family comedy-drama "The Descendants" clearly emerges from the Toronto International Film Festival as a leading Oscar contender. I suppose that's partly a commentary on the middling quality of this year's Toronto lineup, which features many small-scale delights but few smash hits. But it's also an endorsement of the low-key, seemingly casual charm of "The Descendants," which begins as a rambling tale about an inept father wrestling with tragedy and gradually builds toward a satisfying emotional payoff.

This is George Clooney's star vehicle this fall -- as opposed to "The Ides of March," which he directed and in which he plays a supporting role -- and this is the one that may see him collecting gold figurines during the cold-weather months. Clooney's gotten better and braver as he's aged, and no longer seems the least concerned with nurturing his personal vanity or protecting his star image. He is unquestionably the star of "The Descendants," but his character, a slightly disheveled Honolulu lawyer named Matt King who seems to view chinos and a Hawaiian shirt as formal attire, is not exactly a glamorous movie hero.

Matt faces a number of crises at once, and is ill prepared for all of them. His wife is in a coma after a serious boating accident, and his daughters, 17-year-old Alexandra (Shailene Woodley) and 10-year-old Scotty (Judy Greer) are in open rebellion against parental authority. Matt's superficially eager to seize the moment and become a better husband and father, but essentially has no idea how to manage it. Then there's the immense land trust he manages for his extended family, 25,000 pristine acres on the island of Kauai that represents the last untouched inheritance of Hawaiian royalty. (Matt and his tribe are "haoles," or white Hawaiians, but are descended from the House of Kamehameha through a great-great-grandmother.) The time to sell out to a developer, and reap an enormous payoff that will make the whole family rich, seems to have come -- but the final decision lies with Matt.

There's more to explain, but since this movie won't reach theaters until November, I'll save a more detailed plot discussion for another time. But Clooney's understated performance as an undemonstrative guy, who at first seems way too bland and average to hold our attention, is the heart of the movie's appeal and its genius. Payne is a director who refuses to be rushed -- it's been seven years since he made "Sideways," and "The Descendants" bumbles episodically around the Hawaiian islands, buffeted by trade winds and gently supported by slack-key guitar pop. Matt has to grow gradually in seriousness and moral stature along the way, as he realizes that he may be losing Elizabeth for good -- and might have even without the boat accident.

There aren't any huge surprises about where "The Descendants" is going. (If you've ever seen a movie or a play or a television episode, you don't even need to wonder what Matt's going to do with that land.) So how much you like it will largely be a question of whether you enjoy getting there at Payne's leisurely pace. There haven't been many films set against the real-life culture of contemporary Hawaii (as opposed to touristy episodes shot on the beach), and Payne captures the slightly sleepy but fully modern atmosphere beautifully. But spectacular scenery and an interesting backdrop only gets you so far, and "The Descendants" follows the delicate music between the characters as Matt takes his first baby steps toward a new relationship with his family and the world. He forges an uneasy but tender alliance with Alexandra -- who is suddenly forced into the role of substitute mom for her little sister -- and realizes for the first time that her stoner boyfriend, Sid (nice comic relief from Nick Krause), isn't as much of an idiot as he thought.

Clooney does have one big emotional scene -- and it will break you down if you have any kind of heart -- but his performance is really about tiny details, like the way he starts to look at other people a little differently, without saying anything. It's as if he realizes for the first time that they are suffering human beings just the way he is, and that his blithe Hawaiian businessman's optimism is an utterly inadequate response and always was. Exactly what's likely to appeal to a large moviegoing audience about the King family is the fact that they're ordinary people facing an altogether ordinary tragedy in an extraordinary setting, with a bit of highly symbolic side action attached. Heck, I've seen better and more adventurous movies than this; I've seen some this week. But "The Descendants" is gentle, witty, audience-friendly entertainment for grown-ups, with a great performance by one of our biggest screen stars.