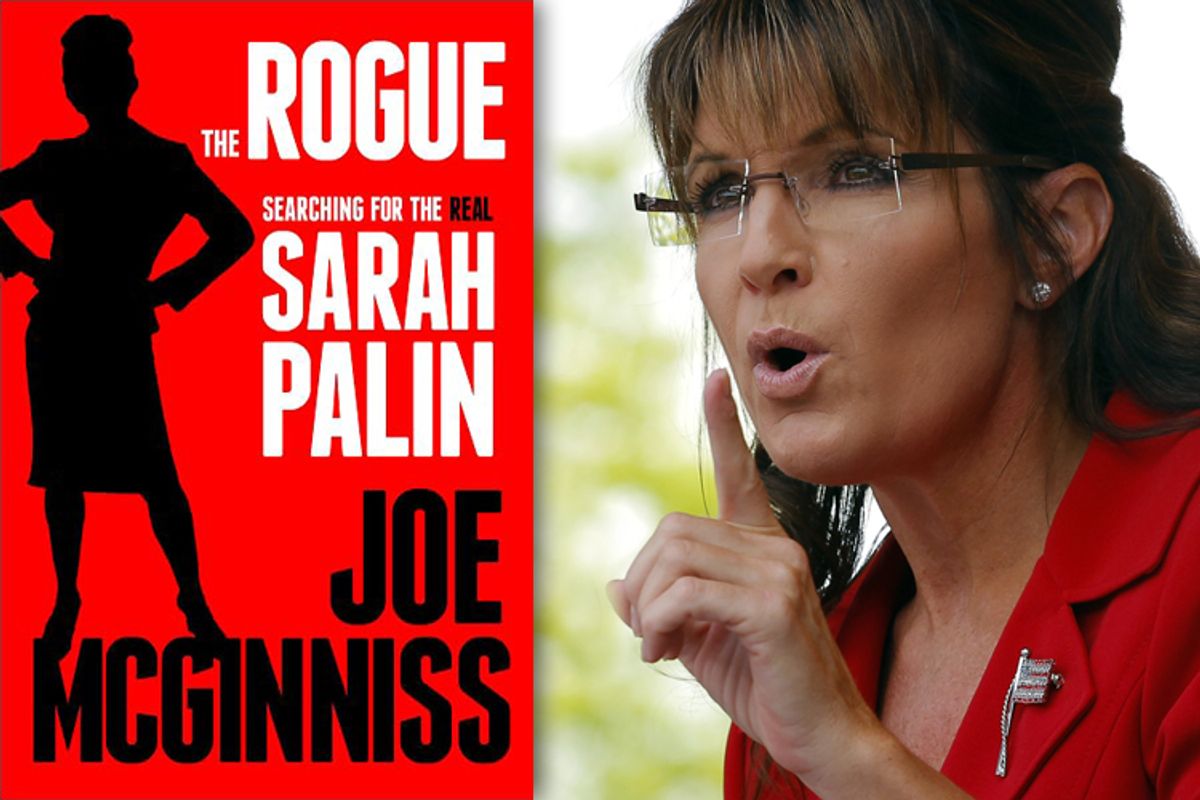 Here, according to the National Enquirer, are the shocking revelations in Joe McGinniss' new book about Sarah Palin, "The Rogue":

There is also, obviously, some stuff about Trig's birth, but I have not yet read the book, so I couldn't tell you how far down the rabbit hole that goes.

Here's my reaction to those revelations: Sarah Palin is a person! She's done drugs and pissed people off and slept with people, like 90 percent of American humans. If Sarah Palin was smart she'd dismiss the book with a chuckle, say nobody's perfect, laugh off the "gossip," and move on.

The Palins always prefer grand self-pitying martyrdom to quiet dignity, of course, which is why picking on them can be so profitable: They will always respond, and always help you drum up more publicity for your Palin-attacking venture. Instead of depriving the book of oxygen, they launched a multimedia attack on Joe McGinniss before he'd finished the first draft, and what they accomplished was ... giving him more material and ensuring that even more breathless anticipation awaited the book's release.

Now that the book's rollout is underway, the Palins might as well get paid for their marketing efforts. Todd Palin angrily denounced it, again accusing McGinniss of having a "creepy obsession" with Sarah Palin. Oooh, it's so creeeepy to write an unauthorized biography of a prominent public figure, right?

How bad did the Palins allowed themselves to be trolled? Sarah Palin's people released a statement on behalf of Brad Hanson, Todd Palin's former business partner, with whom Sarah Palin is alleged to have carried on an extramarital affair, some years back. The statement is a blanket denial, but what does having the supposed beau directly address the press accomplish, exactly? It just drives more interest in the book's salacious, shocking revelations about the secret life of Sarah Palin. This guy, of all guys, should be kept out of it.

I am sure that Todd and everyone else is very personally pissed off that McGinniss went to Wasilla, talked to a bunch of people who hate them, and published a book full of stories about how bad and awful they are, but blowing up publicly just sends the message that there's stuff in the book worth getting worked up about.