The lessons of Solyndra

The controversy shows what Germany knows: Renewable energy needs to be funded wisely 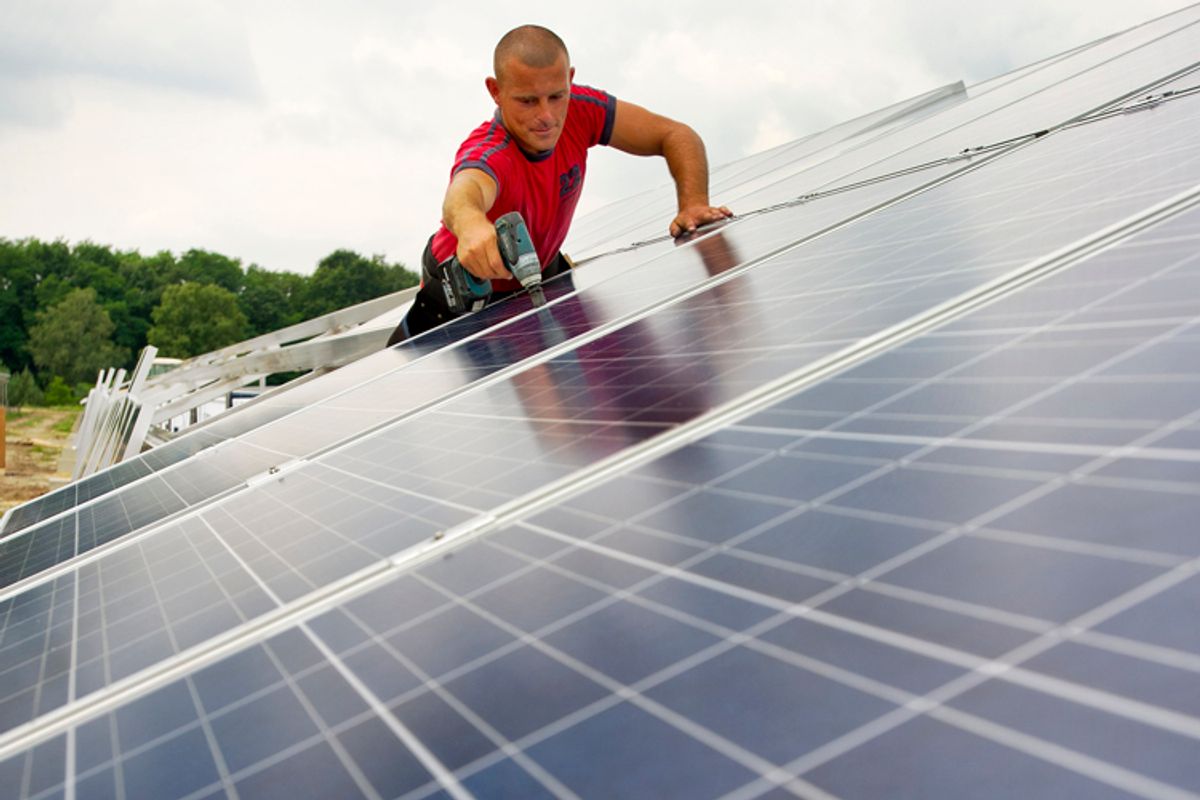 A worker fixes solar modules at a solar park in Spremberg, Germany
--

The recent declaration of bankruptcy by the solar power company Solyndra and investigation into the circumstances of the company's loan approval has both the left and right in a tizzy. Republicans are attempting to use the incident to discredit any government investment in clean energy. Democrats are trying frantically to distance themselves from the decision altogether. As investigators sort out the murky details, it important to remember, the incident is ultimately a distraction from the actual task of building a strong solar industry.

Yes, $534 million is a lot of money, and 1,100 jobs is a lot of jobs, but Solyndra represents just 1.3 percent of the Department of Energy's loan portfolio. America's investment in renewables, and particularly solar, lags behind that of many other G-20 countries as a percentage of GDP. Yet sheer investment isn't enough to ensure a robust renewable sector; it has to be smart investment. And that doesn't mean fussing over individual companies; instead of picking the right companies, we need to pick the right policies. We need to look at what's worked elsewhere, particularly in Germany, which continues to blaze the trail in solar innovation, production and installation.

In December 2010 alone, Germany installed 1,174 megawatts of solar -- more than America installed the entire year. Germany nurtured its industry through the 1990s and into the early 2000s by subsidizing rooftop installations, and by 2004 had installed 100,000 grid-connected photovoltaic systems. But the real driver of success has been Germany's use of feed-in tariffs, which the European Environmental Agency defines as "The price per unit of electricity that a utility or supplier has to pay for renewable electricity from private generators."

Essentially, Germany requires its utilities to purchase solar energy at a price fixed by the government for 20 years after installation. That ensures that anyone who invests in solar -- whether homeowners who put photovoltaic panels on their roofs or companies that develop industrial-size plants -- will get a return on their investment for years to come. The success of the policy in Germany has led to its widespread adoption throughout Europe, and while feed-in tariffs aren't a fail-safe solution -- if poorly designed, they can result in booms and busts, as happened in Spain -- on balance they're highly effective: Six of the world's top 10 solar installers use feed-in-tariffs or an equivalent approach.

For all their demonstrated effectiveness, feed-in tariffs are controversial in the United States because we object to the idea of "fixing prices" and "interfering with the free market." Of course, the idea that the U.S. energy market operates free from government intervention is laughable: The U.S. subsidized oil, gas and coal production to the tune of $72 billion between 2002 and 2008. At the same time we spent just $29 billion on renewable energy over the same period, with a huge chunk of that -- $16.8 billion -- going to corn ethanol, an inefficient energy source that contributes to deforestation but has been heavily advocated by agribusiness.

Still, most solar incentives take the form of rebates and tax credits, which reimburse individuals and businesses for a certain percentage of the cost of installation. The federal government offers a 50 percent tax credit for solar, and some states offer additional credits -- although up-front financing still remains a challenge in many parts of the country. As with any state-by-state endeavor, some states have great policies while others have none; perhaps unsurprisingly, blue states tend to have better incentives for solar than red ones.

Many states also have renewable energy standards, which requires them to obtain a certain percentage of electricity from renewables; to meet these standards, states tend to sign contracts with big companies for industrial-scale projects. Indeed, American investment in renewable energy has largely taken place on an industrial scale, with the government guaranteeing nearly $16 billion in loans to 15 solar companies.

By contrast, Germany's solar market is highly distributed: Since anyone with a solar panel on his or her roof can sell energy to utilities at the premium price, anyone can benefit from investing in solar, emphasizing small-scale, decentralized energy production. Yet despite the focus on a few big, high-visibility projects in the U.S., the hundreds of megawatts such projects produce are mere trifles in Germany, which puts thousands of megawatts on the grid annually, largely through rooftop systems requiring only a few solar panels each.

Of course, there are other important differences between the U.S. and Germany. Germany has a highly skilled labor force backed by strong unions, and a robust environmental movement with real political power, both of which are sadly lacking here. America's abundance of oil, coal and natural gas makes it extremely difficult for renewables to compete with fossil fuels without some kind of pricing mechanism that accounts for the costs of "cheap" energy to health and environment, yet the stranglehold of fossil fuel industries on elected officials makes it unlikely that we'll get such a mechanism any time soon. China's massive investments in solar and other renewables over the past couple of years may yet prove to be a game-changer for the industry as a whole. But Germany still offers a useful demonstration of how a developed world with a history of manufacturing power can build a new industry with the ultimate goal of transforming the entire energy sector.

Whether we learn from their example is another story. What should be clear by now is that we're not going to shift to a clean energy economy in a couple of years with a few hundred million dollars, especially when we're already so far behind. Right now we're fussing over the final moments of a multi-year deal that represents a tiny fraction of government investment in the U.S. solar industry and an absolute pittance in the global solar economy. There's a lot to talk about with regards to our solar policy, but Solyndra isn't it.