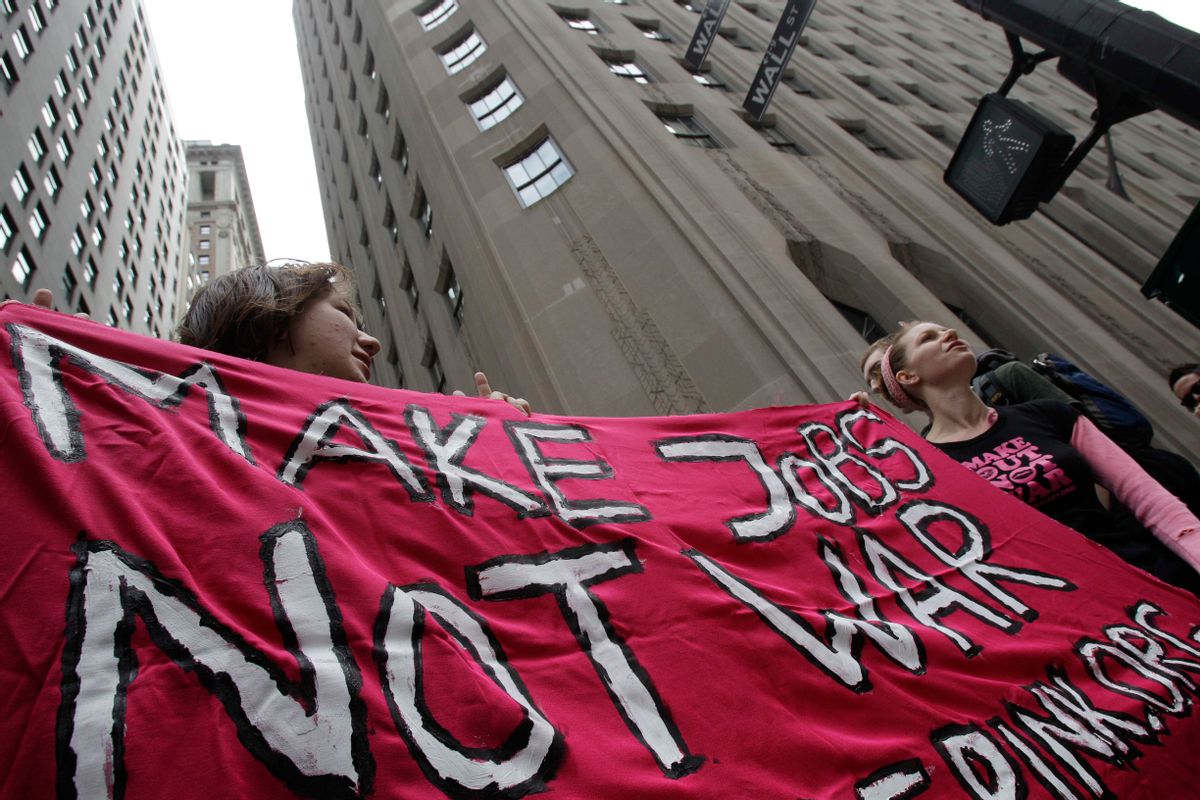 The hundreds of young people who converged on the New York Stock Exchange this weekend are calling their demonstration against Wall Street greed an "American Tahrir Square." While they have a long way to go before they create the tremors that brought down the Mubarak regime, their passion was clearly on display on a sunny Sunday afternoon in Zuccotti Park in lower Manhattan.

The protestors were gathered in the square at the corner of Broadway and Liberty Street, after police blocked them from the epicenter of American finance a couple of blocks away. Many had spent the night in sleeping bags and insisted they were prepared to spend many more to make their point.

"This country is in decline," said Jack Laxson, an 18-year-old Hampshire College student who was carrying a sign that read, "Corporations Run This Country -- Let's Do Something About It."

"Even with a good education, you don't have much to look forward to. No jobs, lots of debt."

Like many of the protestors, Laxson expressed strong disappointment with President Obama, but said the Republican presidential field was even more demoralizing. "They're a social psych experiment," he said.

Matt Rosen, a protestor standing next to Laxson, agreed. "Obama's not on our side -- he's George W. Bush Part Two. And the only Republican candidate who speaks any sense is Ron Paul, and he doesn't stand a chance because the media have blacked him out."

Rosen, a 36-year-old swimming pool contractor from New Jersey, said the bad economy is killing his business. He spent the night in Zuccotti Park, sleeping on a swimming pool cover, because, "If people don't get off the couch, nothing will get done."

"We are mad as hell that the world is as fucked up as it is by corporations," read a leaflet passed out by protesters. "The few who control wealth have bought off our democratically elected leadership." But the mood of the crowd was genial and upbeat.

"Optimism -- that's what brought us down here," said 40-year-old Dan Bryk, who was carrying his eight-month-old son, Henry, in a snuggly while holding a sign saying, "Oligarchy Is Not Healthy for Children and Other Living Things."

"There's a delightful naivete to this crowd," added Bryk.

"Like everyone our age, we're overeducated and unemployed," said Patrick Bruner, a 23-year-old native of Tucson, Arizona who recently migrated to Brooklyn. Bruner said that he and his fellow protestors were prepared to hold the Wall Street square for a long time.

Nearby, volunteers made stacks of peanut butter sandwiches and distributed slices of pizza donated by people who visited the Occupy Wall Street web page. The demonstration had a spontaneous feeling, but underlying it was an extensive social media network. "This is more than just a feel-good rally," said a young man who declined to give his name, as he made cucumber and cream cheese sandwiches. "We're digging in for a long-term occupation."