The college hazing that changed my life

I was a young gay man hoping university athletics would help me fit in. Then the oil wrestling began 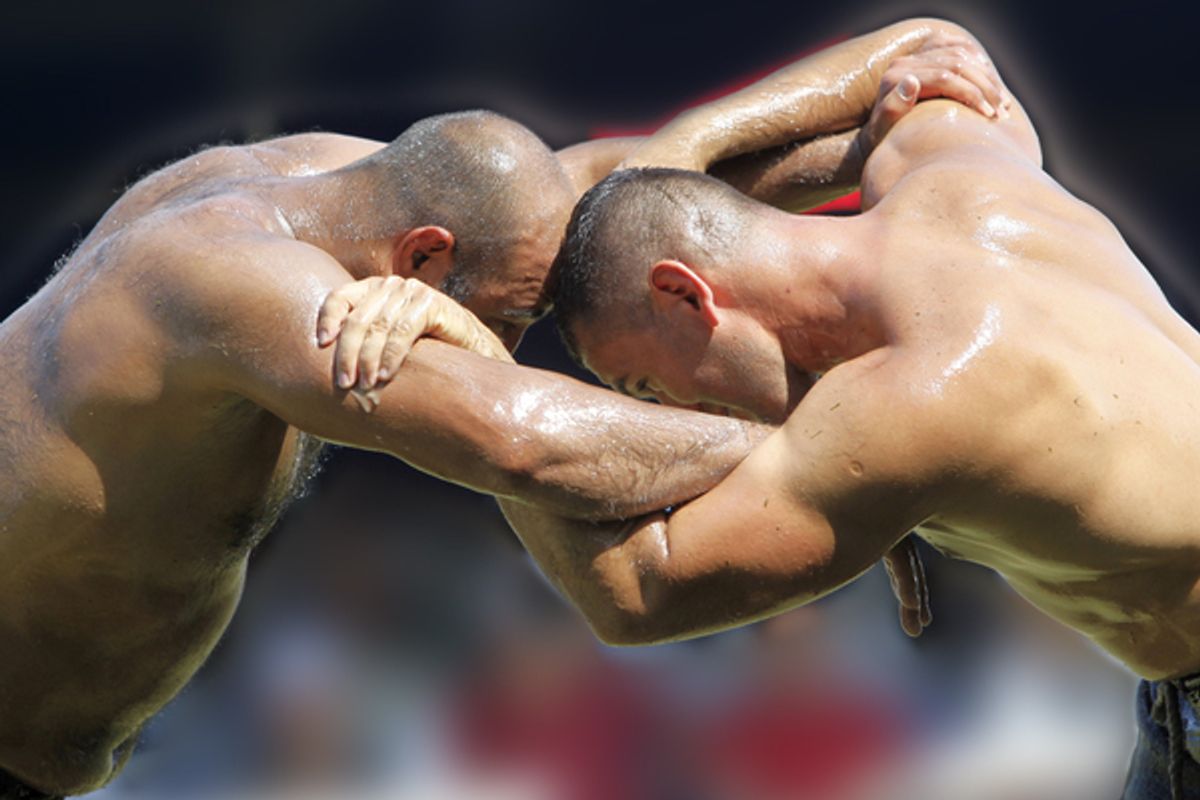 I had no idea college was going to be so much like a gay porn movie. That's what I kept thinking as I stood in the middle of a sun-dappled backyard, dressed in nothing but a spandex unitard and running shoes, preparing to have oil poured over my body. For the last two hours, 10 other young rowers and I had been undergoing "initiation" to my university's varsity crew team. After two weeks of tryouts, we had finally made the grade, and this was our reward: An afternoon of embarrassing hazing activities, followed by a homoerotic climax that seemed to have come straight out of my 17-year-old gay subconscious.

Our team captain, a 200-pound hulk of a man, was walking from freshman to freshman with a large vat of vegetable oil, and letting it cascade all over them one by one. "Be prepared to have the worst acne of your lives over the next week," he warned us. A tarp nearby had also been covered in oil, and other members of the team were streaming into the backyard with bottles of beer to watch what was about to happen. When my turn came, I closed my eyes. As I felt the liquid drip into my shoes, he leaned over and said, "Get ready to wrestle."

College is a strange time. As soon as our parents drive away from our dorms, and leave us alone with our boxes of books and Ikea corkboard, we're free to make an extraordinary number of mistakes and end up in situations that may not teach us much about organic chemistry or Emily Dickinson, but let us figure out who we are and who we want to be. In my case, that situation involved man-on-man oil wrestling.

I had always been my family's black sheep when it came to sports. For as long as I could remember, my mom had been an obsessive long-distance runner. She logged about 50 miles per week, and when her friends ran half-marathons on weekends, she would run along, just to give them "emotional support." My dad, a tall, thin doctor, had competed in triathlons around Western Canada for a large portion of his adult life. And my older sister was a star. Ever since I was a young kid, she had always been an exceptionally talented athlete -- a runner, swimmer, biker and rower. By the time I was graduating high school, she had worked her way to the top echelons of Canada's rowing community and was even considering trying out for the Olympic team.

I, on the other hand, was what some of my disappointed sports coaches had consistently described as "physically awkward." Whereas my sister had inherited all of my parents' athletic genes, I had inherited all of their gangliest. I was tall and shaped like a stretched piece of Play-Doh with twigs stuck into it. My limbs had a tendency to do things that I didn't want them to do, like make me fall over boxes and down stairs. And, to make things worse, I was pathetically, pathologically shy. For most of my childhood, I was the wallflower who stood in the corner while the other kids threw balls at each other's faces (apparently I hung out with some pretty violent kids).

On top of that, I'd known I was gay since I was 8. While that discovery didn't send me into paroxysms of panic, it also made me want to keep to myself pretty much all of the time. I spent most of my early teens reading books and listening to a lot of Nine Inch Nails and ABBA. It wasn't that I didn't want to be a jock like the rest of my family -- in fact, I was envious of my sister's talents -- it's just that I was usually pretty mediocre at the sports I was enrolled in, and practice cut into time spent alone with my Walkman. And then, I discovered rowing.

As far as sports go, rowing is a remarkably bizarre and all-consuming one. You have to get up at 4:30 in the morning to sit in a very skinny boat facing backward and row around in a loop until you get very tired. You have to wear some very revealing spandex outfits. Given that our rowing club was located on a river near farmland, you also have to dodge rocks and tree stumps and the occasional bloated dead cow. And yet there was something magical about it. Every morning, I would get to see the sunrise before I went to school, and I loved the feeling of exhaustion I felt after every practice. In high school, I took the sport more and more seriously until something weird happened: I became sort of good.

Not only did becoming a jock boost my self-confidence, it was an antidote to my anxieties about my burgeoning homosexuality, about the girlish lilt that could emerge in my voice or my occasional extravagant hand motions. I had always been pretty comfortable with the idea that I was gay, but I was still struggling with the implication that it meant being less manly than the other boys. But jocks were manly. They were self-confident, and cool, and, somehow, better than people who weren’t jocks. And if I became one, especially at college, I would be like that too.

When I arrived at tryouts, I discovered these people were much larger, more serious and gregarious than me. Everybody seemed to have gone to a private school with a fancy rowing team. One of the older guys, always surrounded by groups of women, kept referring to something called "The Raft," which turned out to be a large bed he used for group sex. Another, an enormous man who went by the nickname "Ice" (apparently he had just discovered "Top Gun"), claimed to be a former Abercrombie and Fitch model and the son of a Dutch ambassador. He would put rubbing alcohol on his blisters to show people how manly he was, and about one week into the tryouts, he told me to get him a sandwich because "there was a hierarchy on the team," and he was at the top and I was at the bottom. (This comment raised my eyebrows for multiple reasons.)

As different from me as they were, these were precisely the cool jocks I had always dreamed of being. These guys were self-confident, manly and attractive -- and nobody seemed to question their abrasiveness. As Ice was fond of saying, while eating large amounts of tuna in the dorm cafeteria, the men on the rowing team could "bring it -- athletically, academically and socially." Maybe their chutzpah would rub off on me. One week later, when I finally made the team -- as a "bow seat" in the lightweight eight -- I felt so much better about myself. Even if it did mean being surrounded by guys I was starting to feel iffy about.

A few days after they announced the lineup, we had to show up at one of our teammates' houses dressed in our unisuits and running shoes. I figured we were in for hazing, but I had hoped it would be more demure, like those trust games where people wear blindfolds and stand on crates and catch each other. Instead, we had to run around campus holding a boat on our shoulders singing "Row, row, row your boat" (unfortunately, this coincided with my university's annual medieval fair). We had to flex in front of the cafeteria during lunch time, and jump in the lake, and perform embarrassing skits in front of the dorms.

Then came the oil wrestling.

When I stepped onto that oil-covered tarp to face off against my opponent, I wasn't preoccupied by the insane homoeroticism of the moment. Instead, I was thinking about how this entire display was predicated on the fact that gay sexuality was laughable and gross. They had clearly chosen it as a hazing activity because the idea of man-on-man contact would make us as uncomfortable as possible. And the more I thought about it, the more I did feel dirty -- and resentful.

It was with a tremendous amount of apprehension that I began to grapple with the opponent, a similarly skinny freshman named Kieran. As the crowd began to yell, "wrestle, wrestle, wrestle," we pushed each other over onto our backs, and tried to edge each other to the end of the tarp. Oil wrestling (who knew!) really is quite slippery. So we rolled around and spent a lot of time accidentally elbowing each other in the stomach. By this point, a bunch of twigs had already fallen into the oil, and kept jabbing me in the ribs, and the liquid got into my eyes. Clearly I wasn't putting up much of a show. I heard somebody nearby yell out, "Well, this is lame!"

But by the time Kieran pushed me off the tarp and onto the grass, I had the first great revelation of my freshman year: Being a jock was bullshit. If this was the kind of macho, homophobic stuff I had to tolerate to be on a sports team, there was no point in even trying. If that meant admitting I was a mediocre athlete, that was fine with me. I had to come to terms with the fact that my gayness made me less butch than Ice, and that was better than being a douchebag. When the rowing season ended, I left the sport and turned instead toward outcasts like me -- bookish kids, drama nerds and other queer kids. I never turned back.

Now, with some perspective, I can see I discovered something else in that moment, much bigger than my failure to be an all-star jock. I saw that I was never going to be normal. And it was time to stop being embarrassed by that -- and start being excited about it.

A decade later, I still am.