Pop culture, according to Jon Huntsman

In one week, the former Utah governor has referenced Nirvana, Wayne's World and Led Zeppelin. What might be next? 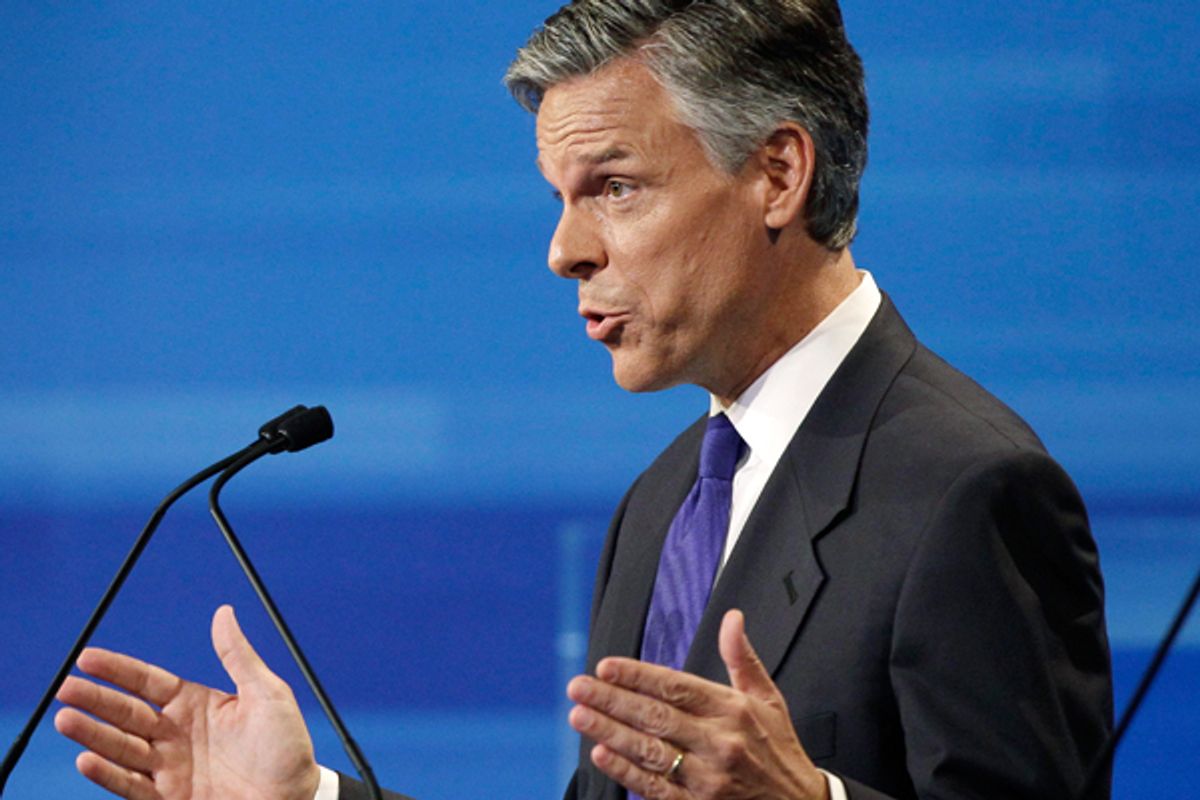 Since when did Jon Huntsman become Dennis Miller?

It was a strained reference -- Huntsman mocked the Social Security plan put forth by Mitt Romney in his memoir "No Apology" by wondering whether it was written by Cobain (who wrote "All Apologies"). But it did get the attention of Nirvana bassist Krist Novoselic, who tweeted: "Kurt Cobain Lives in the GOP presidential debate! Kurt supported Jerry Brown for president in 1992."

Huntsman wasn't done with 1992, however. Later in New Hampshire, he praised the food at a local tavern with "a great line in 'Wayne's World,' the movie, something like, ‘Not worthy, not worthy. Hardly worthy of this kind of food." Then he reached back to the 1970s at a town hall in Sandown, N.H., poking fun of the superficial debate format by comparing it to the short version of "Stairway to Heaven." The governor prefers the original, long version.

It made us dig back for other, less-publicized pop-culture allusions Huntsman might have made since the beginning of his campaign.

"In closing, I am thrilled, honored and humbled to accept your endorsement. I hope to meet some of you afterward, and I hope you'll say, like Renee Zellweger said in 'Jerry Maguire,' 'You had me at single-tiered income taxation.'"

"We're a proud nation, a strong and resilient nation. We look out for each other when times are hard, and we celebrate together when times are good. We sing together, we pray together and, when the time is right, we do a little dance on the catwalk together." [wild applause]

"It's no secret that things are hard right now. I've spoken to many people here tonight who feel like progress is elusive, much like when you try to watch all five Leprechaun movies in a single night, only to realize, too late, that only one, two and five are on streaming, and three and four aren't available for download in their entirety anywhere, even on torrent sites." [silence]

"Our schools are in crisis. A young man -- let's call him Jermaine -- spoke in class today. He said some things that were difficult to hear. But try as we may to forget him, to erase him, from this blackboard of fiscal insolvency, we cannot."

"It's really, you know, like Batman. [inaudible question from off-camera] Yeah, absolutely. Bachmann's Catwoman, easy. Perry's the Joker. But like the Jack Nicholson one, not that guy who died, Keith Ledger. Heath, sorry. [inaudible question] Santorum as the Riddler? I don't know ... I guess he does look a little like Jim Carrey. [inaudible question] Well, I'd be Batman, and whoever ended up being vice president would be Robin. Is that conceited? [pause] Tell you what: The American people are Batman, and I'm their Robin. Fair enough? [long pause, eats most of hot dog] But maybe not such a pansy."

"There is a middle ground to nearly every issue, and this holds true in the current contentious debate between sportsmen and environmentalists. We can draw inspiration from some of the great mediations of history, such as Reagan and Gorbachev working together to tear down the Berlin Wall, or Freddie Mercury and David Bowie deciding, once and for all, who was really under the most pressure."

"I'm not a conspiracy theorist. I don't think the government is lying to people. But I do think you have to learn to sort out the truths from the half-truths and the spin. It's like Sculder, and Myrtle, and the aliens and the guy who loves cigarettes: The truth is out there."

"'Today, perhaps, things didn't get' -- hold on, I'll start again. 'Today, perhaps, things didn't go our way. But you know what they say: when we get knocked down, WE GET BACK UP AGAIN.' [aside, to aide] So yadda yadda, then wait for the applause, and we're done. [stares out window] What the hell is that from, anyway? [aide points at laptop] 'Thub-tumping?' What's that? Some Scottish thing? [aide Windexes laptop screen] Hmm. I'll be damned. [Aide points at screen repeatedly] Ah, TUB-thumping. Got it. [long pause] Really, what the hell is that? [aide shrugs] Do you have Wikipedia on this thing?"