Does "Weekend" mark a new direction for gay cinema? 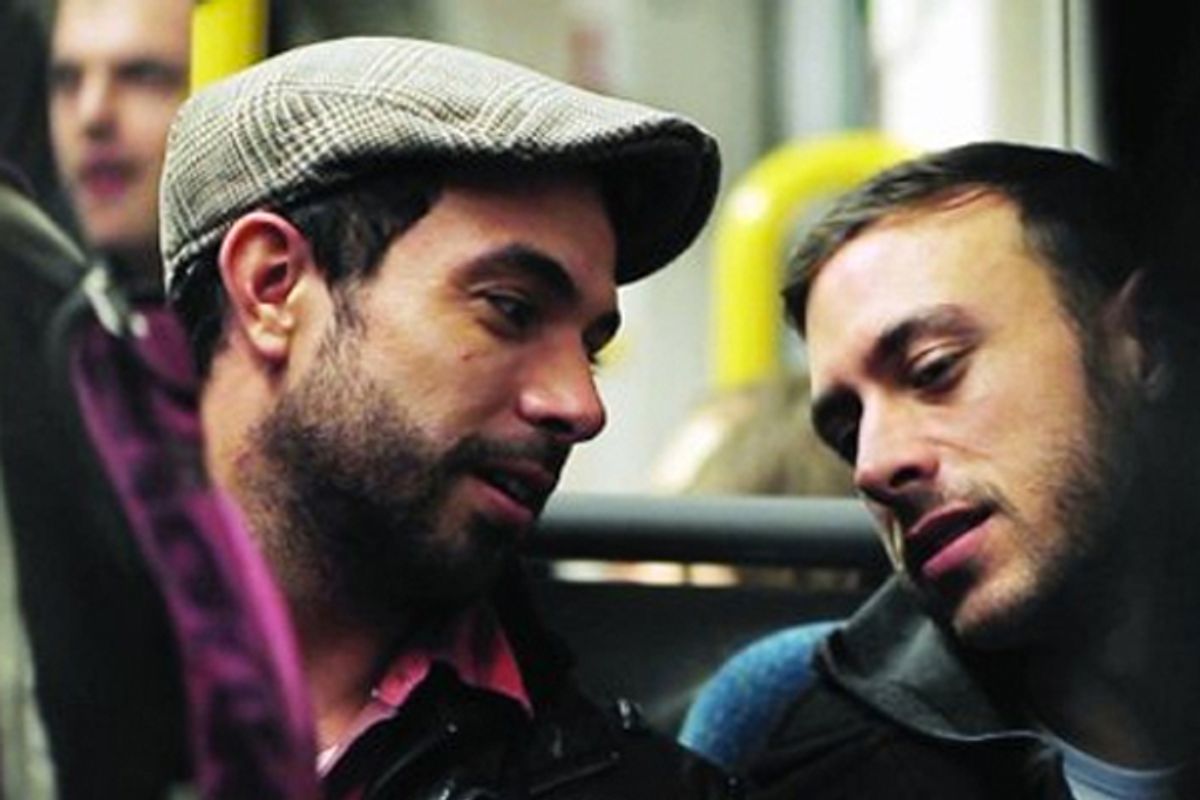 Andrew Haigh's compelling and intense relationship drama "Weekend" is definitely about the complications of being gay in the 21st century, and if you're about to roll your eyes and give me some version of "Oh, the gays! Why won't they ever shut up?" then it's definitely not a movie for you. (Actually, it is for you, but you presumably won't see it.) But let's turn the question around: Is "Weekend" only about being gay? Is the fact that the central couple is gay the most important thing about the film? I'd answer no to both questions, but it's complicated; "Weekend" is such a smart, prickly, sexy, inventive film that it critiques itself and critiques its viewers, gay or straight, even as it spins an archetypal romantic fable.

It's tempting to declare "Weekend" a major step forward for gay-oriented cinema, but that's too much freight to carry for an idiosyncratic little film that's very much its own thing. Let's say instead that it's another terrific auteur-driven indie out of the dynamic British scene, and that adventurous film buffs of all genders and orientations should check it out. It definitely belongs to a modest wave of gay-centric movies that are leaving old cinematic stereotypes behind; Haigh isn't trying to reassure straight viewers that homos are nice and normal and "just like us," and isn't trying to pump up the self-esteem of gay viewers with lame clichés or parables of noble suffering. Russell (Tom Cullen) and Glen (Chris New), who meet one night in a perfectly appalling disco in the English city of Nottingham and wind up spending the weekend together, are neither saints nor victims. They do lots of drugs, are both insecure in various ways and hold conflicted and possibly hypocritical opinions about love and sex. If it becomes increasingly obvious over the course of the weekend that they're falling in love, they also know that's a violation of the unwritten code of cool, young, gay-dude conduct.

I've long maintained that gay-straight cinematic equality will finally arrive when a character's sexuality, however interesting or titillating it may be, is not seen as delivering an important message about tolerance or self-empowerment or some other boring abstraction. I liked both "Brokeback Mountain" and "The Kids Are All Right" a lot, but there's no doubt they're both finely crafted teachable moments. The examples I relish are few and far between: Kristin Scott Thomas as the protagonist's lesbian best friend in "Tell No One," Kieran Culkin as the title character's gay roommate in "Scott Pilgrim vs. the World," Demetri Martin as the gay hero of "Taking Woodstock" (although his character's sexuality is, if anything, too irrelevant). No, gentlemen, I'm not including the numerous films where allegedly lesbian characters are introduced as salacious male-fantasy side dishes. I don't judge you for finding that arousing, believe me! But it doesn't count.

As in so many other areas of culture, the 1980s were way ahead of the present: Pedro Almodóvar's "Law of Desire" and Stephen Frears' "Sammy and Rosie Get Laid," for instance, anticipated this trend by 20 years or more. But if those movies helped spawn the self-involved, studiously transgressive art-house ghetto called "queer cinema" (which never reached beyond a tiny minority of the LGBT public), they had startlingly little effect on the world of mainstream cinema, which remains committed to tried and true models, even in the age of gay marriage and openly gay military personnel. Gays in the movies can be suffering heroes, objects of pity, opportunities for the audience to demonstrate its superior compassion and/or dishy best pals. They are hardly ever just people.

Clearly the sexuality of the guys in "Weekend" is a central issue, and the film's presentation of gay sex is funny, raw, raunchy and frank (although there's little nudity and no NC-17 content, if you're wondering). Oddly, though, by confronting the audience's mixed emotions about homosexuality directly, Haigh eventually gets to a place where it doesn't matter that much. By the final scenes of "Weekend," it's no longer a film about the sexual-political issues Russell and Glen quarrel over or the class-divided, unprepossessing social and geographic landscape of Nottingham -- which Haigh captures beautifully -- or the pervasive cultural climate of homophobia. We move through all that stuff and end up with a story about two people who are suddenly and unexpectedly besotted with each other and don't know what to do about it, which is incredibly specific in this case but also just about as universal as you can get.

Russell, a handsome, bearded fellow with a reserved and slightly ironic demeanor, is what's sometimes called a "straight-acting" gay man, who works as a lifeguard at a Nottingham public pool. He lives in that nebulous zone partway between the closet and not; he's out to his friends (who are primarily straight) but not at work. He doesn't have a boyfriend and walking down the street he looks like an average bloke. He's never going to be the focus of the free-floating homophobic taunting that seems ubiquitous in the public spaces of his working-class neighborhood. I'm tempted to suggest that Haigh overemphasizes this hovering sense of menace but, honestly, who am I to say? I've never had to worry that a public display of affection might provoke a stranger to violence, or to belong to a despised minority amid the laddish, depressed culture of a place like Nottingham.

Glen, who admits to Russell after their first night together that his first choice in the dreadful club was another guy who turned him down, is quite another kettle of fish. He's an aspiring artist with a stylish haircut and a tight-fitting Provincetown T-shirt, and has the angry, somewhat dogmatic queer-radical opinions to match. In describing his long-brewing art project, which involves audio recordings of gay men talking about their sex lives, Glen almost seems to be describing the commercial future of the movie he's in. "Gays will only come because they're hoping to see some cock, and they'll be disappointed. And straights won't come because it's about gay sex. They'll come to see things about famine, rape, disease, whatever. But not gay sex, not that!"

Glen and Russell argue fearfully over gay marriage -- predictably, Glen thinks it's an idiotic bourgeois concession and Russell talks, quite movingly, about why he finds it both beautiful and daring. But let's face it, when two people start arguing about marriage right after they've first had sex, they're in deep trouble. (There are a couple of nice supporting characters, including Russell's straight best friend and Glen's catty female roommate -- I won't use the derogatory term, but we all know it -- but the focus on the two guys is very tight.) "Weekend" eloquently divides between cinematographer Urszula Pontikos' intimate close-ups of the two men in Russell's apartment and daring, ultra-long shots of them as they wander the streets of Nottingham, gradually becoming a little braver about facing the catcalls of strangers. (Glen, who's a compact but powerful little guy, offers to rape someone "in all your holes" after an abusive comment.) But this incipient romance comes with an asterisk, over and above the fact that Glen is implacably opposed, on philosophical grounds, to boyfriends: He's going away in a day or two, to art school in Portland, Ore. For at least two years and more likely forever. (I'm not sure that too many people come back to Nottingham after leaving.)

But you can't file "Weekend" under "OK, gay version of 'Before Sunrise'" and just walk away. If you want to call it an exceptionally intelligent and self-aware gay version of "Before Sunrise," which is simultaneously about the specific problems of two guys in a nowheresville English city and also a heartbreaking story about the ubiquitous human tendency to screw things up and fail to communicate and not quite get what we want, then fair enough. Gay viewers should welcome "Weekend" as one of the bravest, most honest and most accomplished stories of gay love and sex ever rendered on film, while for at least some straight viewers, it may be an eye-opening exercise in the kind of emotional translation that gay people presumably engage in all the time. Even saying all that is underselling a film that's probably a bit too smart and ambitious to reach the audience it deserves, and knows it too. Go see it for yourself, that's all.

"Weekend" opens Sept. 23 in New York and Sept. 30 in Los Angeles, with more cities to follow.