Reasons to be grateful that Gary Johnson will attend tonight's debate 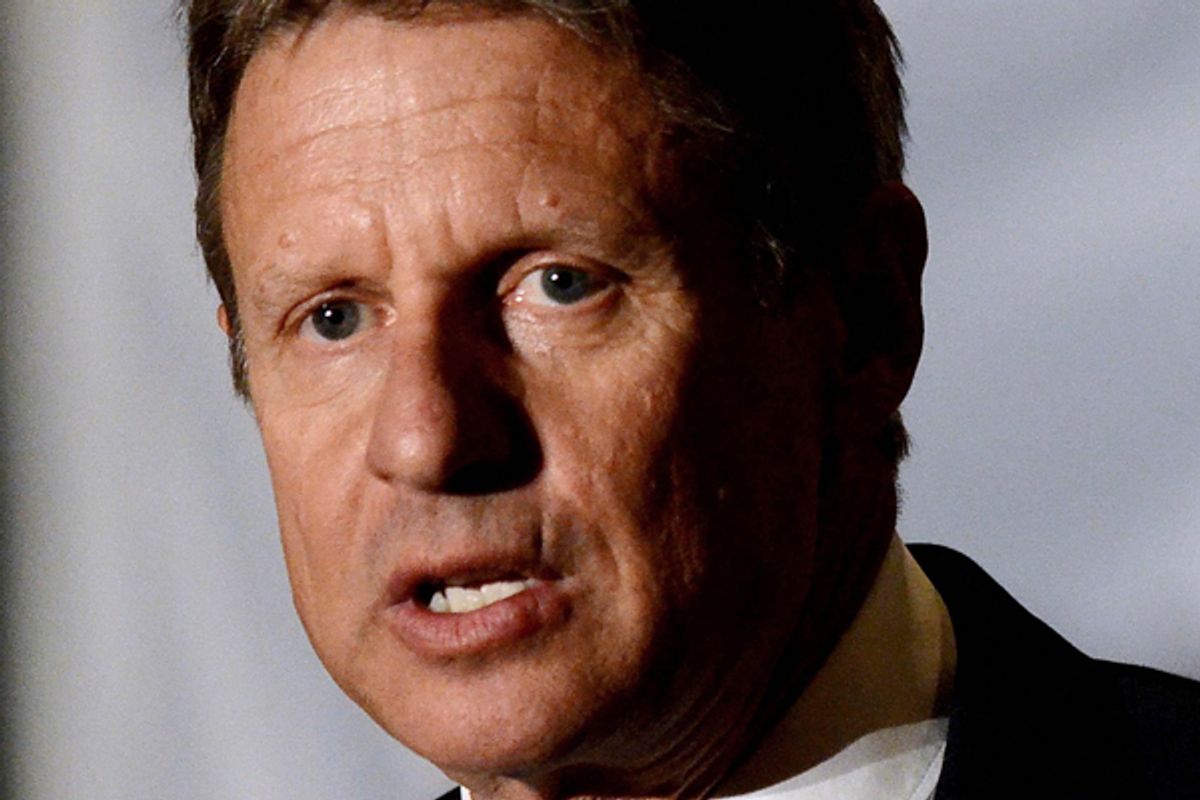 Jon Huntsman may win liberal affection by tweeting about his love of Captain Beefheart and evolutionary science, but Johnson is the race's genuine voice of reason (or Reason), opposing the drug war, mass incarceration and the military-industrial complex in no uncertain terms.

Despite usually meeting most of the official "requirements," poor Johnson has thus far been shut out of GOP debates (and much of the press in general) due to the presence of perennial candidate Paul, who will not relinquish the "token libertarian" seat. Johnson has, I think, a much better shot at winning disaffected young liberals to the libertarian cause than Dr. Paul.

There are two reasons why Johnson's presence at the Fox/Google debate tonight will be welcome:

First, Johnson, a former governor rather than a current lone-wolf representative, has a more pragmatic philosophy than Ron Paul. Johnson, interviewed by Dave Weigel, has a more compassionate answer to the "let him die" question that made Paul look particularly coldblooded at the last debate:

I would have answered that there are people in need, and I'm of the belief that government is the only entity able to provide in some cases. I think we can cut what we're spending in Medicare and Medicaid 33%. There are tough cases like this, and they should be dealt with by the states. But as the governor of a state, no, I don't want to see this guy die!

Second, we are sure to see more death penalty questions tonight. Johnson undertook a very public conversion on the subject while acting as governor of New Mexico. He initially sought to expand capital sentences to minors, while limiting appeals. By the end of his time in office, he'd reversed himself. He now opposes the death penalty completely:

Scott Holleran: You oppose the death penalty. Why?

Gary Johnson: As governor of New Mexico, I was a bit naïve and I did not think the government made mistakes with regard to the death penalty. I came to realize that they do. I don’t want to put one innocent person to death to punish 99 who are guilty.

Paul, it should be noted, opposes the death penalty, but sees it as a "state issue."

It's far from clear that a long-shot presidential bid actually does much to advance a worthy but unpopular cause, but we should all be grateful that at least one person onstage tonight will actually be a compassionate, reasonable person appealing to the audience's better natures rather then their baser instincts.