The revamp is good; Maria Bello is great; but why are the producers promising to tone down the workplace sexism? 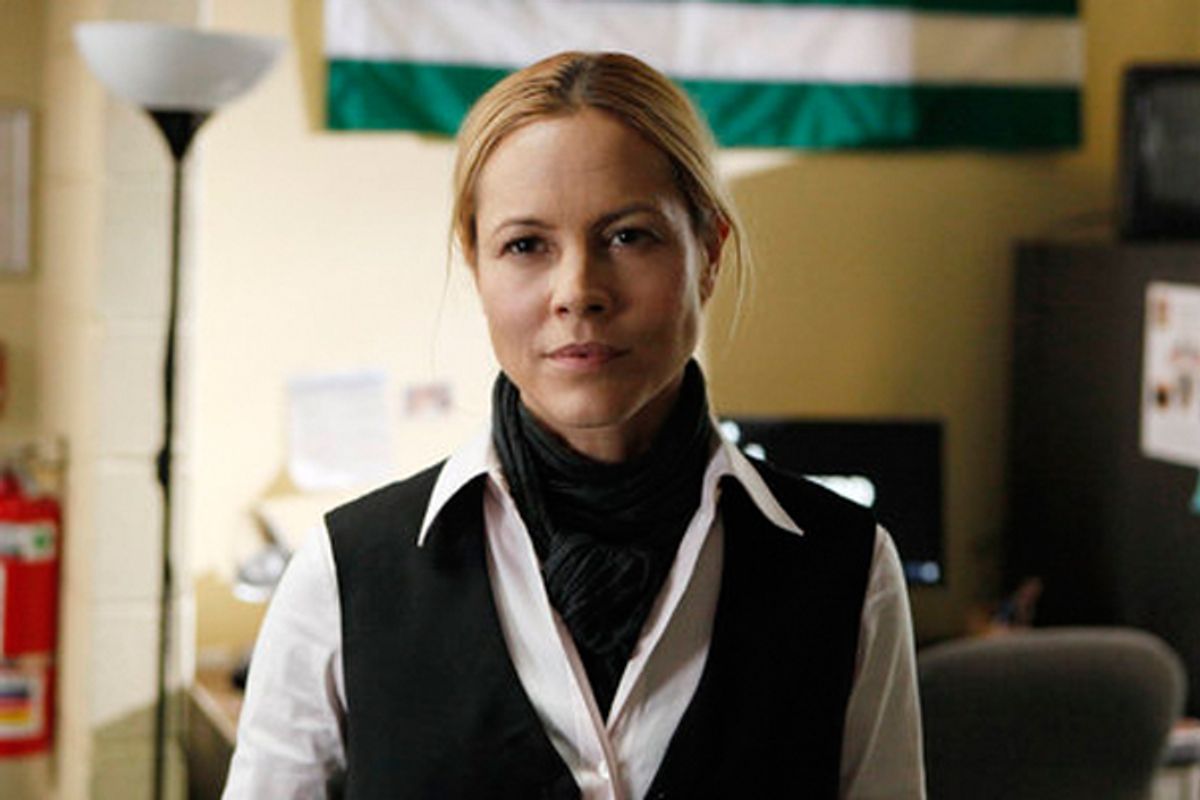 Maria Bello as Detective Jane Timoney in the NBC remake of "Prime Suspect."
--

No, it won't erase memories of the British original, a brilliant series of TV movies and miniseries that featured Mirren as Detective Chief Inspector Jane Tennison in a career-defining role. Temperamentally it feels quite different.  The premise hasn't just been relocated to New York City, it has been revamped for American broadcast network; that means shorter, punchier scenes, a faster-paced narrative and (in the pilot, at least) more reliance on physical jeopardy. The premiere's plot is standard-issue American cop show stuff -- a mysterious and bloody home invasion/murder that the heroine's department thinks it's figured out, but that she considers unsolved -- and it ends with a brutal action scene that owes more to gritty American action films than to modern English police procedurals. But if you can accept such changes -- and if you can't, believe me, I understand -- there's lots to like here, starting with Maria Bello's lead performance.

Bello, a former "ER" cast member who segued into tough, sexy supporting roles in "The Cooler," "A History of Violence" and other films, is just right for this show's conception of its heroine, New York police detective Jane Timoney.  She has to deal with some of the same issues that plagued Mirren's Jane and a couple of new ones. Tops on the list are institutional sexism, the pressure to maintain a "normal" home life (with a live-in boyfriend played by Kenny Johnson), and her family's proud history of NYPD service, which she desperately wants to honor and extend. But executive producers Alexandra Cunningham ("Desperate Housewives") and Peter Berg ("Friday Night Lights") stay true to the original's spirit but don't beat themselves up trying to replicate every nuance. It's possible for viewers who've never seen a frame of the show's inspiration to jump right in and feel as though they're seeing a substantial new work, not a clone of something.

Bello gives an intensely physical performance. Rocking a black Trilby hat, the actress seems to be taking her cues from Steve McQueen, who was always engaged, observant and alert. When you watch Jane interact with her superior officer, Lt. Kevin Sweeney (Aidan Quinn), or with the many jocular, sarcastic, often combative male colleagues in her squad room, the show's emphasis is usually on Jane's reactions. But the series doesn't overhype every tremor of her emotion. Berg, who also directed the pilot, puts Jane at the center of almost every scene, but the series rarely relies on dialogue when an expressive reaction shot will do. You always know what Jane is feeling, but you don't always know what she's thinking.  Jane doesn't come to the viewer; you have to go to her.

The rest of the show's performances follow Bello's example.  Quinn's Sweeney is a macho cop whose years of experience in authority positions taught him to rein things in a bit and communicate with all types of people; but in scenes opposite his mostly male underlings, you can see that he never lost touch with that guy's-guy side of himself. Even though he likes and respects Jane, he's more comfortable around men than women, and declines to intervene when one of Jane's colleagues habitually poaches cases on which she should be primary investigator.  Kirk Acevedo ("Oz") puts his expressive face to great advantage as ex-football player turned cop Luisito Calderon. Peter Gerety has a couple of coolly endearing moments as Jane's dad, Desmond, a retired cop to whom his daughter can turn for advice and moral support; in just a few minutes of screen time, they sketch one of the most believable, non-stereotypical father-daughter relationships in recent TV.

Brian F. Byrne, last seen in HBO's "Mildred Pierce," is the show's most potentially fascinating backup character -- a fellow detective who's outraged when Jane gets a battlefield promotion that puts her in charge of the squad, and makes it his personal mission to tell Jane precisely what he thinks of her, workplace protocol be damned.  I wish they hadn't shown us a crack in his resentful facade so early, though; there's a moment late in the episode where he all but tells Jane that he's going to be her most important ally -- a rare instance of "Prime Suspect" telegraphing a move that it should have concealed.

Will any of the above make a difference to you if you find the very idea of a "Prime Suspect" remake blasphemous? Probably not -- in which case you shouldn't bother tuning in. I'll be back next week, though. The pilot overcame a lot of my resistance. I was surprised by how quickly it established its own energy and point of view, despite the looming shadow of an esteemed predecessor and the existence of many current and recent shows ("The Closer," "In Plain Sight," "Saving Grace") that have already raided the Mirren version.

The most troubling thing about this series isn't a writing or performance or directing issue; it's the report from this summer's TCA Press Tour that the premiere's emphasis on harsh workplace sexism was not representative of the show as a whole, and that Cunningham, Berg and company planned to tone those aspects way down in future episodes. The portrait of Jane's  difficult progress in a still male-dominated career was one of my favorite things about this pilot -- a quality that immediately distinguished it from so many other modern cop series, which pretend that workplace sexism (active or passive) doesn't exist, unless it's practiced by some loathsome minor character who's clearly marked "sexist pig" so that you can write him off and congratulate yourself for being enlightened. "Obviously, it's 2011," Cunningham told critics in August. "There’s no institutionalized sexism. There’s human resources. Women have recourse at work when things happen." She said "Prime Suspect" would "try to make it more realistic, because sexism isn’t gone. It’s kind of more subtle and insidious in a modern world, and that’s what we’re going to try to do."

No institutionalized sexism? Really? To paraphrase another fictional female cop, Marge Gunderson from "Fargo," I'm not sure I agree with you a hundred percent on your police work, there, Cunningham. For all the strides that women have made in traditionally male-dominated, dangerous professions in recent decades -- police work, the military, firefighting, long-haul trucking -- they still have to deal with gender bias, some of which is "subtle and insidious," and some of which is overt, juvenile, depressing, hateful, even physically threatening. I hope that this show's creators are making this change for artistically defensible reasons, not because they're afraid viewers will turn away from a cop show that's not set in the gender blind, white-collar, office-centered environments of most modern, technology-driven crime and cop dramas. Those series, whatever their merits, are basically escapist. I like that this pilot isn't like that. Some of its more grating or upsetting moments (such as Jane's male co-workers instinctively resisting her every order, and casually repeating rumors that she slept her way to the top) reminded me of stories that a female friend used to tell me about serving as a U.S. Marine in the '90s and early aughts.

The constant ostracizing and borderline hazing of Jane in NBC's "Prime Suspect" pilot isn't an outdated aspect of an English show that first aired in 1992; it's an ongoing reality for more women than NBC, or network TV generally, wishes to admit, much less depict. This pilot, like the original "Prime Suspect," is not about a cop who happens to be female, it's about a female cop -- a critical distinction that's a big part of its reason for being. Bello's Jane, like Mirren's before her, wishes to be judged solely on her actions and her character, but gender discrimination -- and her own psychological and emotional differences as a woman -- complicate or impede her progress. That's not feminist agitprop; it's an ongoing fact of life that should be shown on television. If the series downplays it, it could lose a big part of its potential specialness, and turn Jane into "The Closer" in a saucy hat.