U.S. not "standing idly by" in Bahrain

In the wake of violence and oppression by the regime against protesters, the Pentagon proposes a major weapons sale 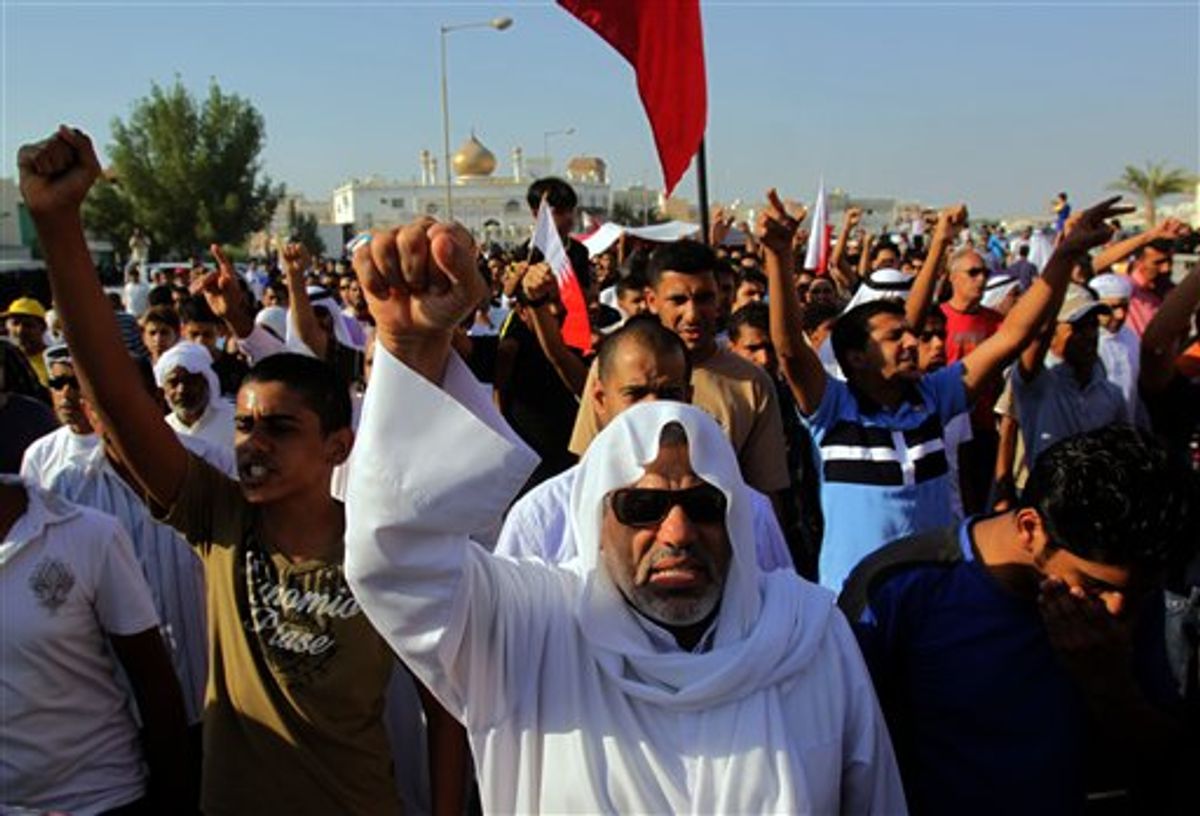 Thousands chant anti-government slogans Sunday, Sept. 18, 2011, in the western village of Dumistan, Bahrain, during the funeral of Jaffar Hasan Yousef, 29, who relatives said had been hospitalized in Bahrain and Jordan since being severely beaten during a house raid allegedly by security forces during the spring crackdown that followed an anti-government uprising. There was no immediate government comment. (AP Photo/Hasan Jamali) (AP Photo/Hasan Jamali)
--

We cannot stand idly by when a tyrant tells his people there will be no mercy.

The United States will continue to support those nations that transition to democracy -- with greater trade and investment, so that freedom is followed by opportunity. We will pursue a deeper engagement with governments, but also civil society -- students and entrepreneurs; political parties and the press. We have banned those who abuse human rights from travelling to our country, and sanctioned those who trample on human rights abroad. And we will always serve as a voice for those who have been silenced.

The protesters were fired on after they had gathered in the capital Manama from the funerals of demonstrators killed in a security crackdown earlier this week.

Witnesses said the army fired live rounds and tear gas, and officials said at least 120 people had been hurt.

At least five protesters have been killed and hundreds wounded in a crackdown by Bahraini forces on Wednesday, the head of the Shi'ite Muslim opposition bloc in parliament said.

"This is a war of annihilation. This does not happen even in wars and this is not acceptable," Abdel Jalil Khalil, a senior politician in Bahrain's largest Shi'ite party Wefaq, said.

Abdulhussain bin Ali Mirza -- who also serves as the chief executive of the state-owned Bahrain Petroleum Company (BAPCO) -- said 293 employees have been dismissed since the King declared martial law on 15 March to quell weeks of demonstrations.

Bahrain, the tiny but strategically important Persian Gulf monarchy that has sought for months to suppress an Arab Spring-inspired uprising, is engaged in a heated dispute with one of the world's foremost medical relief organizations, which has stopped working there after accusing Bahraini security forces of raiding its premises last week.

The accusation by the organization, Doctors Without Borders, has been challenged by Bahrain's Health Ministry. But the sensitivities surrounding the dispute over the July 28 raid speak to what human rights activists call a particularly odious aspect of the Bahraini protests: the government’s systematic effort to deny medical services to wounded protesters -- partly by jailing or intimidating the doctors, nurses and paramedics who have tried to treat them.

At the height of the protests, led by the kingdom’s Shiite majority, seeking more rights from the Sunni monarchy, security forces commandeered the Salmaniya Medical Complex, Bahrain's largest public hospital. Dozens of doctors and nurses who treated protesters were arrested.

In a report last month, Human Rights Watch said the crackdown included "attacks on health care providers; denial of medical access to protesters injured by security forces; the siege of hospitals and health centers; and the detention, ill-treatment, torture and prosecution of medics and patients with protest-related injuries." It called the attacks "part of an official policy of retribution against Bahrainis who supported pro-democracy protests."

Authorities then initiated a large-scale campaign of retribution in which more than 2,500 people were dismissed from their jobs, including teachers, medics, and other professionals. The special military court established under the decree has convicted more than 100 people, most of them for patently political offenses such as criticizing the ruling Al Khalifa family. Many of those detained have alleged that they were subjected to torture, and four people died in custody, apparently from torture and medical neglect. Leading political opposition figures have been sentenced to long prison terms, in some cases for life, solely for their role in organizing the large street protests; their trial record does not link them in any way to acts of violence or any other recognizable criminal offense. . . .

The government has prevented Human Rights Watch from visiting the country since mid-April, and tightly restricts access for journalists and other rights groups.

In fairness, the U.S. is fulfilling President Obama's pledge that it will "not stand idly by" in the face of a tyrant's oppression of his own people, as the U.S. is actively feeding that regime new weapons; that, by definition, is not "standing idly by."  In his U.N. address, President Obama praised the regime ("steps have been taken toward reform and accountability") but then powerfully added: "more are required"; he also then equated the two sides: the government's security forces and democracy activists on whom they're firing and otherwise persecuting ("America is a close friend of Bahrain, and we will continue to call on the government and the main opposition bloc – the Wifaq – to pursue a meaningful dialogue").  I think it's important to remind everyone that the reason there is so much anti-Americanism in that part of the world is because they're primitive, ungrateful religious fanatics who Hate Our Freedom.

(1) Joe Trippi, the former campaign manager for Howard Dean and now a Fox News Democrat, is on the payroll of the regime in Bahrain, doing P.R. work for them; Trippi told Salon's Justin Elliott that he "had no problem working for them" because "this is one of the progressive countries in the Middle Eastern Gulf"; Trippi -- who now also works for Massachusetts Democratic Senate candidate Bob Massie -- also touted the fact that on his Twitter avatar, he shaded his face with the color green to express solidarity with Iranian protesters, which is proof of how much he loves democracy;

(2) as the regime in Yemen continues to slaughter protesters, it's worth reviewing this recently released WikiLeaks cable from 2005 detailing the mighty impressive list of weaponry supplied by the U.S. to that regime; it's important to remember, though, that WikiLeaks and Bradley Manning are the real criminals and it would be better for us not to know;

(3) Newsweek's Eli Lake reports that in 2009, as President Obama was publicly pressuring Israel to stop settlement building, he "secretly authorized significant new aid to the Israeli military that includes the sale of 55 deep-penetrating bombs known as bunker busters," which could be "potentially useful in any future military strike against Iranian nuclear sites" and thus might "be seen [by Israel and/or Iran] as a green light for Israel to attack Iran’s secret nuclear sites one day."  The Bush administration rebuffed Israel's requests for those weapons but ultimately indicated it might deliver them in 2009 or 2010, which is why Obama's authorization was necessary.