Appearing with Jewish extremists is designed to win over apocalyptic Christians 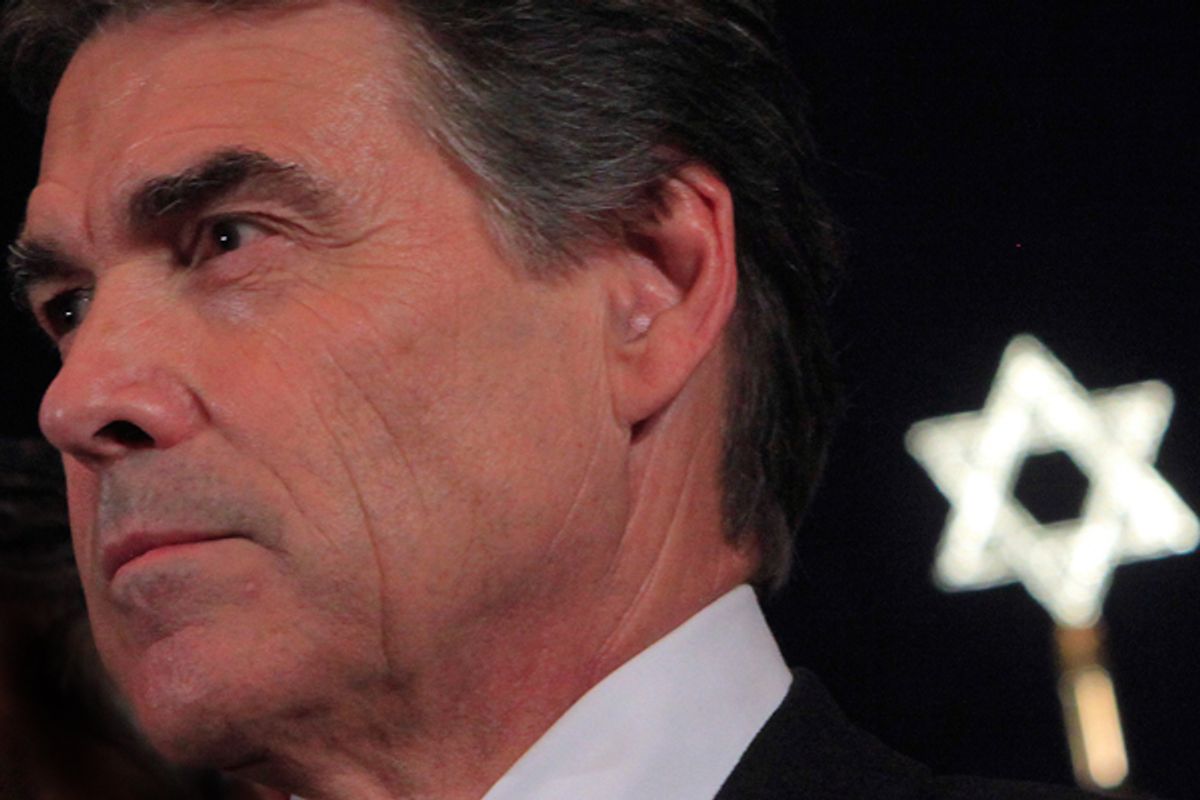 At a press conference in New York on Tuesday billed "pro-Israel," Republican presidential hopeful Rick Perry was flanked by Orthodox Jewish leaders. At first blush the event looked like a play for Jewish voters who would buy his claim that President Obama was a modern-day Neville Chamberlain despite official U.S. opposition to the Palestinian bid for statehood recognition at the United Nations. But while Perry touted his Jewish endorsers, his intended audience was not Jews but Christian Zionists.

Perry, no doubt, seeks the approval of conservative Jewish pundits and the campaign contributions of hawkish donors. But in the battle to prove himself to the crucial voters in evangelical-heavy early primary states like Iowa, South Carolina and Florida, Perry needs to distinguish himself from the merely Israel-supportive Mitt Romney. And for that, he needs to prove beyond the boilerplate Israel-is-America's-greatest-ally that he embraces Israel's role in what Christian Zionists believe is prophesied in the Bible: that the establishment of the state of Israel is one step in the chain of events that will lead to a bloody showdown at Armageddon and culminate in the Second Coming of Christ.

As a Texan, Perry is well familiar with this base, and in particular the religious underpinnings of its beliefs. His friend John Hagee, the San Antonio televangelist who endorsed and spoke at Perry's August prayer rally the Response, is a leading Christian Zionist who in 2006 founded Christians United for Israel, which in short order became the leading Christian Zionist political organization in the country. With a national network of pastors and supporters who host regular "pro-Israel" events at churches, and Hagee's solid relationships with both Republican and Democratic elected officials, CUFI has managed to transform Hagee's apocalyptic fervor into a political movement with the ear of prominent politicians.

Like Perry, many of these politicians understand that CUFI's followers represent a significant swath of evangelical Republican voters. A 2005 poll by the Pew Forum on Religion and Public Life found that white evangelicals were "significantly more likely to believe that God gave the land of Israel to the Jews" than other respondents (72 percent versus 44 percent) and "significantly more likely to believe that Israel fulfills the biblical prophecy about Jesus' second coming" (63 percent versus 36 percent).

The survey also found that "traditionalist" evangelicals, the largest evangelical subgroup, which is characterized by its orthodoxy and church attendance, are most likely to agree that U.S. policy should favor Israel over the Palestinians. Traditionalist evangelicals, Pew found, provided George W. Bush with 27 percent of his total votes in the 2004 election.

In 2008, though, John McCain notoriously rejected Hagee's endorsement, a move that startled and angered evangelical leaders. Without missing a beat, Perry has enthusiastically embraced him, building on his appearance at Hagee's church the Sunday before Election Day 2006, and then welcoming him as a leader in the Response. At that event last month, where Hagee compared Perry to Abraham Lincoln, a section of the stadium was reserved for -- and filled with -- members of Hagee's Cornerstone Church.

Many, like Sarah Palin has, were sporting Judaica -- Stars of David, yarmulkes, prayer shawls -- to demonstrate their claimed affection for all things Jewish. But for Hagee's followers, this fetishizing of all things Jewish is motivated by the belief that when Jesus comes back, the world will be ruled by a rabbi, and they'd better be ready to adopt Jewish practices. Still, though, they believe one needs to accept Jesus as savior now, so they won't be left behind when the Rapture happens.

While politicians like Connecticut Sen. Joe Lieberman dismiss concerns that Hagee is animated by a biblical prophecy about Armageddon, Perry knows full well that Hagee's followers are indeed motivated by prophecy, not policy. In an email alert this week, CUFI touted that "CUFI is making a difference! Israel is rapidly becoming an issue recognized by millions of Americans as a key factor in our national security and an essential requirement in receiving God's blessings as a nation and a people." (emphasis added)

Asked on Tuesday whether he considered supporting Israel a theological priority, Perry responded, "Well, obviously, Israel is our oldest and most stable democratic ally in that region." That's the boilerplate, but then he went on, "That is what this is about. I also as a Christian have a clear directive to support Israel. So from my perspective, it's pretty easy. Both as an American and as a Christian, I am going to stand with Israel."

Perry's directive is straight from the Christian Zionist reading of Genesis 12:3: God "blesses" those who "bless" Israel and "curses" those who do not. Like the theme of Perry's Response -- that America must collectively repent for "sins" like abortion -- this view is premised on the notion that God will punish America if it doesn't "support" Israel. In his 2006 book, "Jerusalem Countdown," Hagee argued that God would curse America with terrorist attacks if it didn’t militarily strike Iran to destroy its nuclear program.

The blessings and curses don't just apply to a failure to strike Iran, but to any U.S. support for the Israel-Palestine peace process, and in particular, dismantling of the Jewish settlements in the occupied territories. I once interviewed a woman at Hagee's church who believed that Hurricane Katrina was God's punishment for what she termed the "Gaza land giveaway," otherwise known as Israel's 2005 pullout from the Gaza Strip.

"Jerusalem Countdown" was recently made into a film featuring, among others, Stacey Keach, Lee Majors and Randy Travis, and is endorsed by the American Family Association, the anti-gay, anti-Muslim Christian right group that bankrolled the Response. The website for the film reveals the real heart of Hagee's polemic, noting that it "highlights the reality of an inevitable conflict between Israel and Islam."

That cosmic battle with Islam is also the theme of the propaganda films "Relentless," "Obsession" and "The Third Jihad," produced by the Clarion Fund, an offshoot of the Orthodox Jewish group Aish Hatorah. The films are widely promoted to evangelical audiences. The Clarion Fund has ties to Jewish businessman Irwin Katsof, who paid for a Perry trip to Israel in 2007, where his firm Global Capital Associates gave the governor a "Friend of Zion" award.

Perry's allies in Israel also understand how to play the Christian Zionists. Far-right Knesset Deputy Speaker Danny Danon, who appeared with Perry in New York, argues Israel should annex the West Bank to punish the Palestinians for pursuing statehood. He apparently inspired Illinois Rep. Joe Walsh (of deadbeat dad fame) to introduce a congressional resolution supportive of an Israeli annexation of "Judea and Samaria" should the Palestinians continue their quest for U.N. statehood recognition.

Although at the Tuesday press conference Perry claimed to not know of Danon's annexation demand, he, like Walsh, understands that his audience is the Christian Zionists, not American Jews. In fact, prominent Jews question his allies. When his friend Danon staged a show trial in the Knesset in an effort to portray the American group J Street as "anti-Israel" for its support of a two-state solution, even the Anti-Defamation League's Abe Foxman, criticized by liberal Jews for, among other things, his opposition to the Park51 community center in New York, called Danon's hearings "inappropriate" and "counterproductive." And this week, J Street's president Jeremy Ben Ami called Perry's "pro-Israel" press conference "one of the most irresponsible things I have ever seen in my three decades in American politics."

Christian Zionism is not without its evangelical critics. On the same day that Perry held his news conference, the evangelical scholars David Gushee and Glen Stassen released an open letter to their Christian Zionist brethren accusing them of underwriting sin against the Palestinians. Pleading with their evangelical brethren to rethink their reading of biblical texts, the pair argued, "it is overwhelmingly clear that American evangelical-fundamentalist Christian Zionism affects US policy toward Israel and the Palestinians in distressing ways. It is one reason why the United States stands almost alone in the world community in supporting Israeli policies which our international friends generally find intolerable if not immoral and illegal."

The dire tone of Gushee and Stassen's letter demonstrates just how powerful (and destructive) the Christian Zionist ideology has been. Perry understands the power, but has chosen to overlook the destruction.