How the two-party duopoly operates 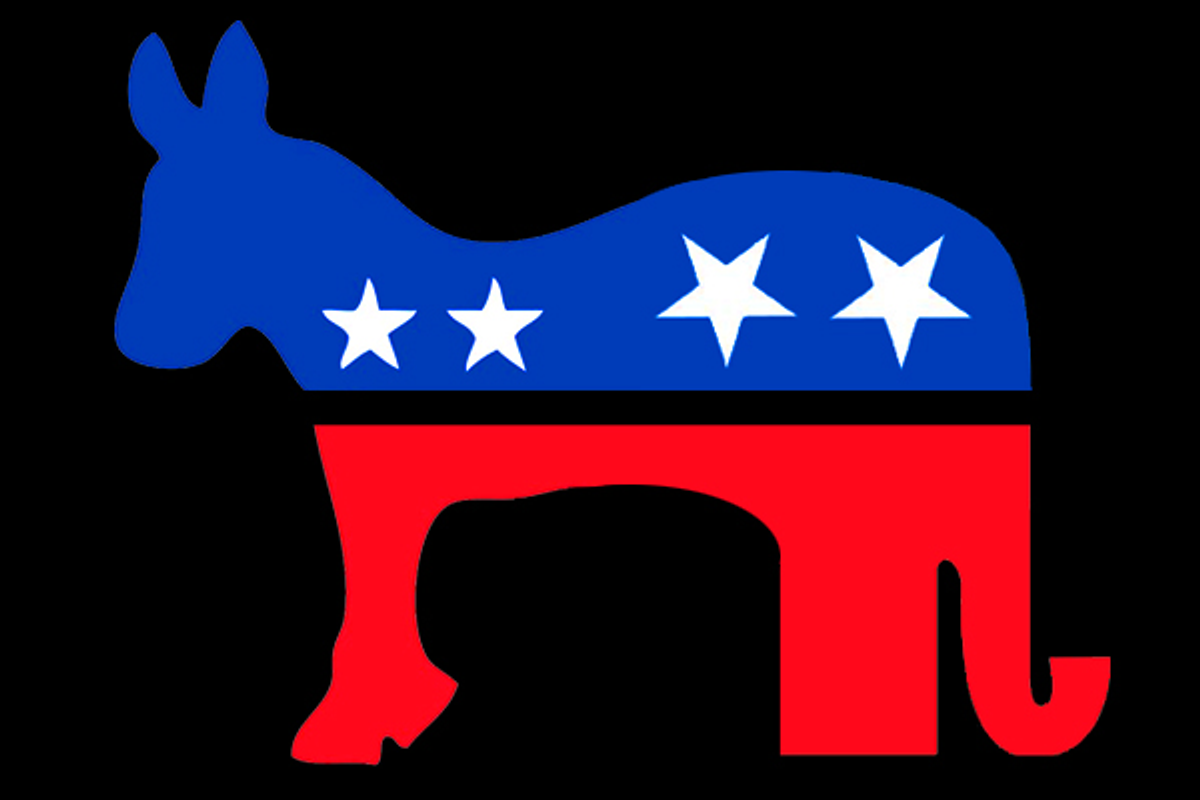 By now, probably everyone reading this is already sick of America's quadrennial political spectacle -- the one in which politicians and media outlets ask us to believe that there remain vast differences between our two political parties. It's like cheaply staged pornography on a red and blue set, with words like "polarization," "socialist" and "extremist" comprising the breathless dialogue in a wholly unconvincing plot.

Some of this tripe can be momentarily compelling, of course. And as the 2012 election climax draws nearer, many Americans will no doubt submit to the fantasy. But before that happens, it's worth looking a few levels beneath the orgiastic presidential campaign for a last necessary dose of nonfiction, if only to remind us that the parties are often two heads of the same political monster.

As good a place as any to get such a dose is my home state of Colorado, which this month provided two emblematic examples of how the two party duopoly really operates.

Exhibit A is our Republican secretary of state, Scott Gessler. Though his job is to enforce campaign finance rules and protect voting rights, he's proudly using his office for exactly the opposite.

After being elected in 2010, he first reduced campaign finance fines against the local Republican Party in Larimer County, then announced that he will headline a fundraiser to help that local party pay off the levies. Now, this GOP hack is suing the overwhelmingly Democratic bastion of Denver in an attempt to prevent ballots from being sent to 55,000 of the city's registered voters. Gessler's public rationale? He says that because these citizens chose not to vote in the last election, they shouldn't get ballots this year.

Exhibit B is Democrat Tom Strickland -- a flesh-and-blood monument to revolving-door corruption.

Back in the 1990s, Strickland got his start serving as Colorado's U.S. attorney. He then slid into a lucrative job at one of Colorado's top corporate law firms. A few years later, he jumped back into public service, making two failed Democratic bids for the U.S. Senate. From there, it was on to the executive vice presidency of UnitedHealth Group, one of the nation's most rapacious health insurance companies. When Barack Obama was elected president, Strickland headed back into government, as the chief of staff of the Interior Department -- the agency that's supposed to regulate the oil and gas industry. Then, this week, Strickland got himself a job at the law firm defending BP in the Deepwater Horizon spill.

Despite being tied to major issues and a crucially important electoral swing state, and despite the overtly public nature of their moves, Gessler and Strickland's actions received almost no national media attention, which reminds us that these two political figures are not special cases -- their behavior is today's unquestioned norm.

Gessler represents both a bipartisan effort to undermine campaign finance regulations and an ends-justify-the-means-ism that has become pervasive in American politics -- in this case, his is the Republican kind that is aimed at suppressing the vote. Strickland, meanwhile, embodies the Democratic side of a permanent bipartisan elite that has made corporatism and public service completely synonymous. The two Coloradans may exemplify different pathologies, but those pathologies both contribute to our political system's overarching dysfunction.

So the next time you tune into a cable TV pundit-a-thon or a talk-radio screamfest that tells you how "divided" American politics is, and how one party is so much more honorable than the other, remember Colorado and all the other examples like it before you head down the rabbit hole of election-year delusion.