The "Drive" backlash: Too violent, too arty or both? 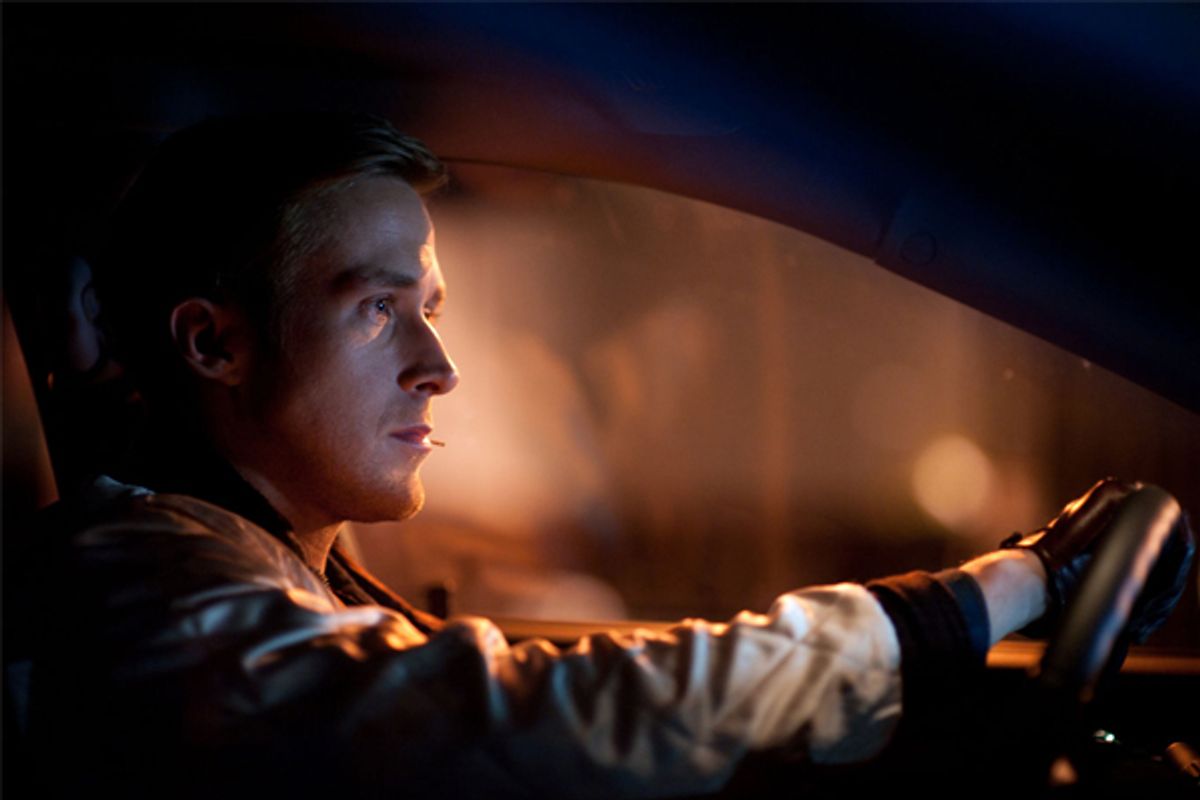 Thomas Rogers, Salon editor: So there seems to be an audience backlash against "Drive," a movie that you and a lot of other critics have been very fond of. It had decent opening weekend numbers (about $11 million, good for No. 3 on the charts), but the problem with the movie seems to be word of mouth: Basically, people hate it. It might have something to do with the fact that it's being advertised (at least on New York subway platforms) very ambiguously, with lots of glamorous photos of Ryan Gosling and Christina Hendricks, in a way that says very little about what the movie is about. People show up expecting a glossy sexy movie about a man driving a car, when in reality it's basically a hyper-violent European art-house movie that offers little in the way of car chases or romance. That's one way of thinking about it, but I honestly think the bigger problem is that this movie is too gut-churningly violent.

Andrew O'Hehir, Salon film critic: I suspect it's really a combination of both of those things. It's both too elliptical and too violent, and it may have been positioned incorrectly in the marketplace. This is a movie tailor-made for contemporary American critics, who are steeped simultaneously in the culture of Eurocentric art-house movies and in Hollywood B cinema of the '70s and '80s, all the stuff that inspired Quentin Tarantino. Although I have argued forcefully that "Drive" is not "Pulp Fiction," for a whole bunch of reasons, there's no denying that it belongs to a similar tradition. But the thing is, the general public really doesn't share that peculiar combination of rarefied and populist taste, you might say. And "Drive" may seem quite mysterious to many people. It isn't really much of an action film, even though there is considerable violence. The hero and the girl never get it on, and barely even kiss. It may be the most chaste and sexless R-rated film in history. It has, let's just say, a highly indeterminate conclusion, with the fate of the protagonist very uncertain.

T.R.: Based on my own experiences, and the experiences of other people I've spoken to who've seen the film, I do think the biggest word-of-mouth problem for the film is the many, many horrible things that happen to people's throats, hands, eyes and heads in it. The way I describe it to people, and the way other people have described it to me, is that "Drive" is a very good movie that I never, ever want to see again. I should disclose that I have a very low tolerance for both fork-related violence and eye-related violence, and that this movie happens to combine both of those things in a very unpleasant way at one point. But I saw the movie in a sold-out screening in New York, sitting next to two 19-year-old women who, based on their chatter, went to see it because it had Ryan Gosling in it. By the time the first person's head exploded, 45 minutes in, they just started traumatically screaming, which echoed my own internal experience. I guess the question becomes, though, what makes this movie's violence more unpalatable to audiences than, for example, the violence in the "Saw" movies, which tend to do fairly well at the box office?

A.O'H.: That's an interesting question. I think the promotional campaign has highlighted the film's style, which is gloriously accomplished, and suggests a kind of slick, sexy adventure featuring Ryan Gosling and Carey Mulligan and Christina Hendricks, something that's going to be fun and not too serious, rather than a film with forks in eyeballs and exploding heads. Like, basically a "Fast & Furious" sequel with more aesthetic ambition and a better cast. For better or worse, American audiences have been conditioned to expect certain kinds of narratives with certain rhythms, and this movie openly defies that. While most critics have embraced it, I would point to the counter-example of Open Salon blogger Scott Mendelson, who is a staunch defender of mainstream, audience-pleasing Hollywood cinema. He totally hated "Drive," and found it pretentious and unbearable. So here we are once again thrown back on the fact that people who watch hundreds of films a year, generally speaking, develop different tastes and different expectations from people who see a small fraction of that number. Vincent Canby of the New York Times said this years ago: You can't watch 350 films a year and not become a specialist, of some kind.

For many critics -- and I'm not sure, I may belong to this contingent, though I hope I don't -- extreme violence is first and foremost an aesthetic or stylistic element. Those of us who watch a lot of international genre movies have seen Korean gangster films or Italian horror movies that make the violence in "Drive" seem relatively tame. I kind of hate to tell you this, but at the Cannes premiere there was cheering and applause, even some laughter, after the head-explosion scene. I mean, I think it genuinely did startle and affect people, right in the moment, but then a split second later, the reaction was more like: Well done! You got us! What an awesome combination of, I don't know, early Kubrick and '70s grindhouse! It was as if the actual effect of the horrific violence quickly got turned into a more intellectual or analytical reaction.

T.R.: That's odd. I found the violence in "Drive" to be the most disturbing I've seen in a movie in a very long time. I've seen a couple of Nicolas Refn's previous movies and liked them even though they were brutal. But they were very stylized. This one struck me as particularly visceral, partly because of the slow buildup and its more realistic aesthetic, and partly because, as you mentioned, on its surface it seems like such a "Hollywood" movie. Yet the violence is extraordinarily graphic in a way you rarely see in something that is not a gritty foreign crime movie or a grindhouse film, or a horror movie.

I'm kind of fascinated by the target demographic of the movie -- like, who's supposed to see it in the first place? There are people who are going to see it because of Ryan Gosling, but I feel like the normal Ryan Gosling audience isn't all that fond of seeing someone stomp people to death. The movie has these gay movie references -- mostly to Kenneth Anger's underground film "Scorpio Rising" -- but there's really nothing overtly gay about it. The title sequence has this campy 1980s lettering, which is duplicated in the film's ad campaign -- and a hilarious, awesome fake-'80s synth score -- which makes it seem like it might have a romance or comedy element to it. But the film's only sex scene involves two people touching a stick shift, and there's probably only one joke in it. I think, basically, this movie manages to frustrate everybody's expectations of it -- to its great credit. I mean, it really is quite good. But then, I'm not sure anybody should be surprised if it bombs.

A.O'H.: I think that's a very good summary, and it sums up not just the problems with this film -- the marketing and P.R. problems with this film, that is to say -- but also the problematic relationship between film critics and the general public. Critics, generally speaking, get most excited by seeing something they haven't seen before, even if that very often means, as in this case, a fusion of familiar ingredients whose net effect is unfamiliar. Moviegoing audiences who are forking out 10 or 12 bucks on Saturday night generally want to see something they have seen before, delivered expertly and well constructed, maybe with a neat narrative twist or some hot new actors. It's more complicated than that, of course, in that there are many films that satisfy both constituencies. But "Drive" seems to belong to the same category as "The American," Anton Corbijn's hit-man movie with George Clooney from a year ago, which was also pretty much an art film in disguise. I suppose the audience feels it has been promised one thing and delivered something quite different. And, you know, I can sympathize with that. They're probably right.