Democracy has been commandeered by a self-interested gang 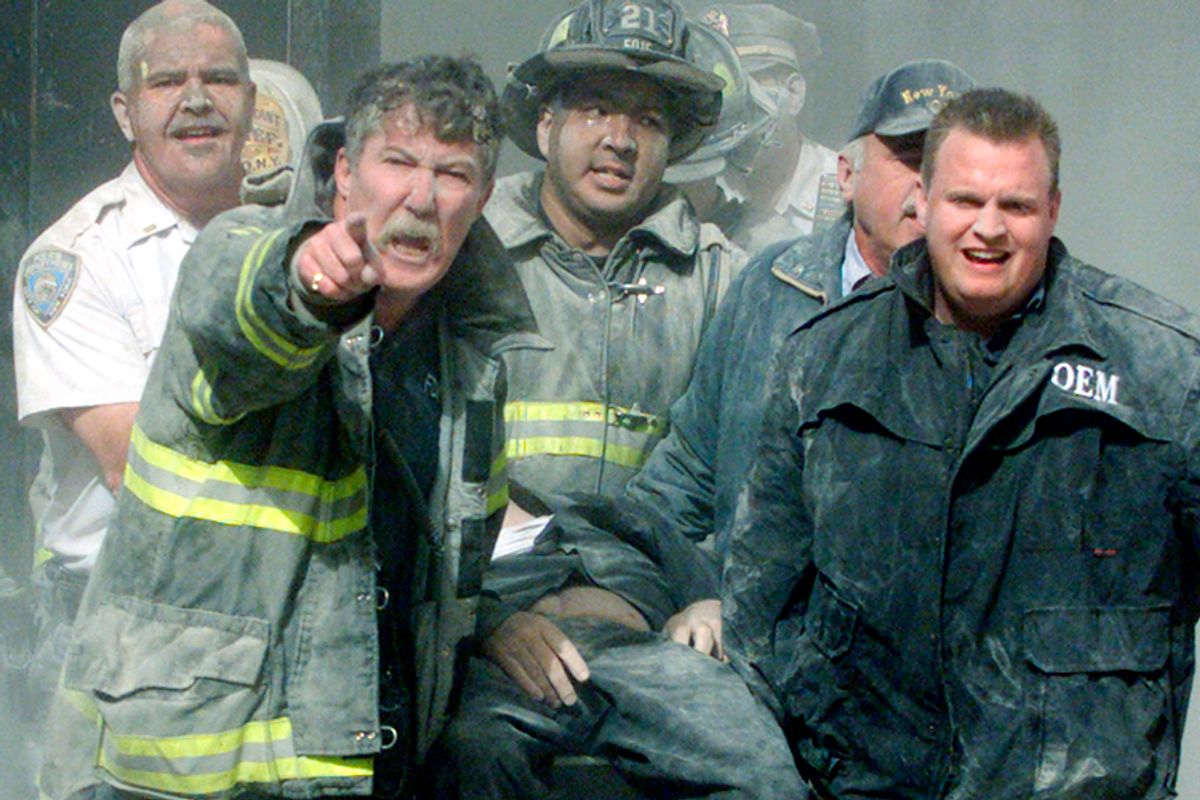 Rescue workers remove a man from the World Trade Center tower in New York City early September 11, 2001. Both towers were hit by planes crashing into the building. Victims from the attack on the World Trade Center - many suffering from extensive burns - began arriving at hospitals in New York City about an hour after two planes slammed into the twin towers, witnesses said Tuesday. REUTERS/Shannon Stapleton JC/ME (Reuters)
--

About a year after the 1995 bombing of the Murrah Federal Building, I visited Oklahoma City and went to the bomb site with a friend who had covered the attack as a television news cameraman. No memorial or museum had yet been built; fencing covered with teddy bears, flags and scrawled messages surrounded an empty, grass-covered lot.

There was a simplicity to that empty lot that appealed, an understated eloquence that, to me at least, said all that needed to be said. Now, despite all the hubbub and hand-wringing surrounding its design and construction, in many ways, the new 9/11 memorial at ground zero in Manhattan captures some of that same, straightforward plainness -- the names of the dead punched into bronze, the waterfalls gracing two great voids where the towers used to be, muting the noise of visitors' voices and quieting the surrounding city. No filigree or statues.

We went to the new memorial for the first time last week. It was a perfect, end-of-summer day. Sunlight sparkled in the two pools, and you could see in one of them the wavy reflection of an American flag hanging from across the street. When the breeze was just right, a light mist from the waterfalls caressed your face.

I was pleased, too, by the vast plaza, so reminiscent of the one that used to separate the original towers, the wind corkscrewing around their height and sending hats into orbit. In the next few years, when all the construction around the site has ceased and the landscaped trees and other greenery have more fully grown, this will be the place for contemplation that was intended. And perhaps those who come here will reflect not only on the events of 9/11 but their unexpected consequences and whether we as a nation are ever prepared for what comes next

On the afternoon we visited the memorial, I was already downtown, attending a daylong conference on post-9/11 worker protection and community health, sponsored by the New York Committee on Occupational Safety and Health (NYCOSH), a coalition of labor, civil rights, medical, faith-based and environmental organizations.

"Are we ready for another 9/11?" Dr. Linda Rae Murray, president of the American Public Health Association, asked us. "Hell, no! Were we ready for Katrina? Or the tornadoes? Or the H1N1 flu? We don't have the resources; we've let our infrastructure disappear. No, we're not ready."

The World Trade Center collapse created the largest number of workplace fatalities in the history of the United States. Government bumbling and dissembling about air quality downtown and conditions at the site, the rush back to business as usual, may have irreparably killed and injured countless others. In the words of Bruce Lippy, formerly with the International Union of Engineers, who spent weeks working on the pile, "They didn't want to turn Manhattan into a Superfund site." Chip Hughes of the National Institute of Environmental Health Sciences (part of the NIH) added, "There should be an apology."

Many of the health consequences for those who survived and continued as rescue and recovery workers have been summed up in a recent study of 27,449 participants in the World Trade Center Screening, Monitoring, and Treatment Program. The stark statistics were published in the Sept. 3 issue of the British medical journal the Lancet:

This doesn't include all the others who lived, worked or studied at or near ground zero, inhaling smoke, ash and dust -- air some have described as more caustic than Drano. Nor does it include the cases of neurological disorders, mesothelioma, and other cancers appearing more and more among 9/11 survivors -- illnesses that legislators and activists are now battling to add to the list of conditions covered by the James Zadroga 9/11 Health and Compensation Act.

It was hard enough passing the Zadroga Act in the first place, beating back years of resistance and wrangling in Congress, a GOP filibuster and so-called compassion fatigue around the rest of the country (at the NYCOSH conference, Jon Stewart was applauded as a local hero for his role shaming opponents of Zadroga into approval). Seeking new coverage for 9/11 cancer patients is another uphill fight against indifference and overt hostility.

So for those who will come to Manhattan from everywhere else to pause and reflect at the new 9/11 memorial, better perhaps to consider some other implications and side effects of the terrorist attacks that impact not just the greater New York area but the entire country and beyond. In fact, many of the issues being battled over in Washington and across the Dr. Seuss-like landscape of the 2012 election campaign have a direct bearing on future 9/11s in America, no matter where and when they may happen. (And why do all the Republican presidential debates remind me of those cheesy paintings of dogs playing poker?)

Infrastructure? Think of all those decaying roads, bridges and tunnels, and the chaos if they fail during an evacuation. Deregulation? If anything, 9/11 demonstrates that certain OSHA and EPA rules on safety, clean air and water need expansion and better enforcement. Conservative attacks on public employees and organized labor? The first at the scene on 9/11 were the firemen, police, emergency medical technicians and union construction workers who stayed on the pile until the last scrap of steel was gone, not to mention the Communication Workers of America members who risked their lives restoring phones, microwave links and IT; the electricians, plumbers and engineers.

Budget cuts adversely affect training and response times. Politics interfere with scientific research. State labs are underfunded or closing. Universal healthcare, if it existed, already would have taken care of many of the doctor's appointments, tests, treatments and medications being funded, but still only in part, by Zadroga and other programs.

Another article in that Sept. 3 issue of the Lancet chronicles "Adverse health consequences of US Government responses to the 2001 terrorist attacks." According to its authors, Dr. Barry S. Levy and Dr. Victor W. Sidel, the wars in Afghanistan and Iraq "caused many deaths of non-combatant civilians, further damaged the health-supporting infrastructure and the environment (already adversely affected by previous wars), forced many people to migrate, led to violations of human rights, and diverted resources away from important health needs."

In Iraq, "Oil spillages, contaminated ash, unexploded ordinance, and depleted uranium at and around US military bases have all caused environmental damage." The health status of Afghans is "lower than almost any other country," life expectancy at birth is 48 years, only 27 percent of the population has access to clean water.

According to the report, "The initial $204 billion spent on the Iraq War could have reduced hunger throughout the world by 50 percent and provided enough funds to cover the needs for HIV/AIDS medicine, clean water and sanitation, and immunization for all children in developing countries for almost 3 years. Within the USA, the federal budget for the 2011 fiscal year for the war in Afghanistan -- $107 billion -- could have provided medical care for 14 million US military veterans for 1 year."

Domestically, "After 9/11 and the anthrax outbreak shortly afterwards, the USA and other countries have improved emergency preparedness and response capabilities, but these actions have often diverted attention and resources from more urgent health issues."

The coalitions and alliances that have formed in the decade since 9/11 -- the professionals and ordinary citizens who from day one have stepped up when official bureaucracy has not -- are the one bright light shining through tragedy. But it's not enough. "Do we understand that we've been hijacked by a small group of people using government for their own benefit? This is our government," the Public Health Association's Linda Rae Murray declared. "It doesn't work well but it's ours and we have to seize control of it and put in place what we need to keep ourselves and our neighbors healthy."

When you visit the 9/11 memorial, think about that simple, fundamental notion as you remember the fallen, the heroes -- and everyone else struggling to survive.