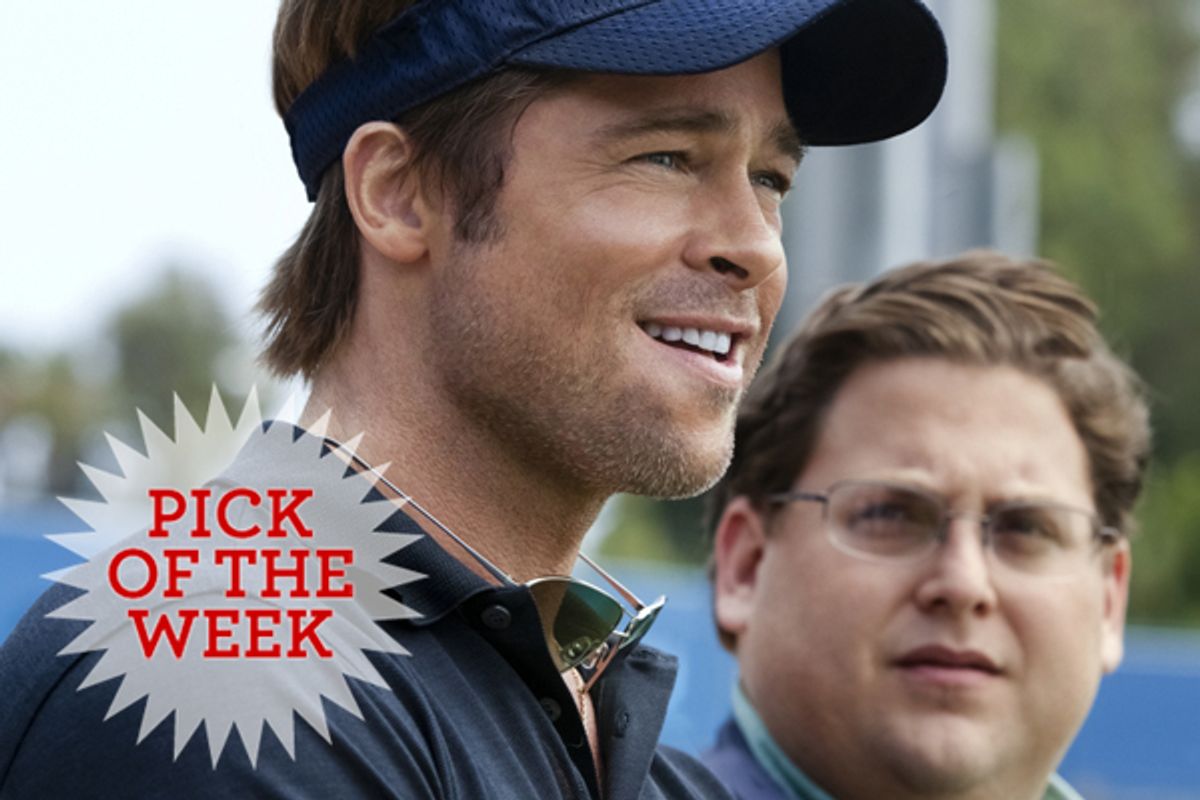 I'm damned if I understand how a nonfiction book that's largely a wonky study of systems and information, and a story about the clash between empirical data and subjective wisdom, became an Oscar-friendly star vehicle for Brad Pitt. But that's exactly what happened with the long-delayed and troubled film production of "Moneyball," which has to be described as an example of what Hollywood does best. Baseball fans and statistics buffs will no doubt have numerous nits to pick with this lovingly crafted underdog fable from director Bennett Miller (his first film since the terrific "Capote"), which exists at several removes from journalist Michael Lewis' acclaimed bestseller. (The screenplay has been through numerous iterations, and a pair of heavyweights, Aaron Sorkin and Steven Zaillian, share the official credit.) But what we get in the end is a richly detailed and enjoyable American yarn, built around a warm and expansive performance by Pitt as Billy Beane, revolutionary general manager of the Oakland Athletics.

Indeed, while I'd still argue that this fall's crop of Oscar contenders looks a little tepid in cinematic terms, the array of potential star power and collective testosterone in the best-actor category surely has the Academy's broadcast producers and promoters drooling. It seems plausible and even likely that Pitt, George Clooney (for "The Descendants") and Ryan Gosling (conceivably for "Drive" but more likely for "The Ides of March") will all be nominated, perhaps an unprecedented Leading Man-apalooza. If Pitt's role in "Moneyball" is more of a conventional star turn than his career-shifting performance as the stern 1950s father in "The Tree of Life" (for which he emphatically deserves awards but won't win any), it's still terrific. He's on-screen in almost every scene, often filling it up in extreme close-up, and captures the bluff, buff and shrewd Beane, a washed-up jock who embraced an unorthodox statistical philosophy through sheer necessity, with great wit and physicality. (Let me throw in that "Moneyball" is a delirious study of bad early-2000s guy fashions and haircuts, which may elude some of the audience but is definitely conscious.)

Let me hasten to assure you that "Moneyball" isn't all that much of a baseball movie, although fans of the national pastime will of course rush to see it. It's a prime Brad Pitt movie -- arguably the prime Brad Pitt movie -- and an American fable about a battered but lovable divorced dad who defies conventional wisdom and beats the odds. Then it's a somewhat watered-down retelling of Lewis' story about how math geeks upended an American institution, and only then is it a sports flick (and probably the most detailed portrait of life behind the scenes in Major League Baseball ever put on-screen). It's time for me to confess that I'm in a highly unusual position re "Moneyball," which cannot help but color my reaction. I'm a lifelong fan of Beane's bedraggled, low-budget team, the A's, and while I had to follow their remarkable 2002 season, which is chronicled here, from 3,000 miles away, it left an enduring impression. That also means that I view the events of "Moneyball" through a rueful prism, since Beane and the team have struggled through some lean years since the explosive drama of '02. The rest of baseball has long since caught up to the A's, who've had several losing seasons in a row (including this one), play in a decrepit stadium before a declining fan base, and may not survive in Oakland much longer.

None of that should affect how ordinary moviegoers react to "Moneyball" in the slightest. Here's what you need to know, at least as it appears on the big screen: After losing a heartbreaking five-game playoff series to the big-budget New York Yankees in 2001, the A's faced implosion. Three of their biggest stars were defecting to richer Eastern teams, and Beane's skinflint team owner, Steve Schott (played by Activision CEO Bobby Kotick, one of several odd cameos in the film), refuses to increase the team's $39 million budget, about one-third what the Yankees spend. In the course of trying to hustle up some affordable warm bodies to play for his team, Beane runs into a supremely unathletic Yale economics grad named Peter Brand (Jonah Hill, proving he can handle a modulated dramatic role), who is buried deep in the Cleveland Indians front office. Brand tells Beane that there's an "epidemic failure" in baseball to understand the true nature of the game, and that he knows how to use "sabermetric" data to build a cheap team that will be even better than last year's pricier version.

All of this is reasonably accurate, but if you're a "Moneyball" reader who already knows what OBP and OPS stand for, you may feel slightly frustrated by the lack of detail, and you'll realize that Peter Brand is a composite character largely based on Beane's real-life assistant, Paul DePodesta (later the G.M. of the Los Angeles Dodgers and now a vice president of the New York Mets). In fairness, though, Miller does a nice job of dramatizing the opening shots in the ideological civil war that consumes baseball to this day. In meetings with Oakland's scouting staff -- leathery old guys who've spent their lives standing on sun-baked fields in the American outback, watching teenagers throw, catch and hit baseballs -- Beane and Brand face a mixture of disbelief, contempt and outright rebellion.

Miller also makes it clear that the surprising success of the 2002 A's was only partly a result of Brand/DePodesta's innovative statistical research, which enshrined on-base percentage, slugging percentage and other newfangled stats as being far more relevant to winning than "baseball-card" numbers like batting average or RBIs. Beane had to batter his gruff, combative field manager, Art Howe (wonderfully played by Philip Seymour Hoffman), into compliance, and then saw Howe get much of the credit for the team's record-setting winning streak. Some of the team's discount-store pickups, like unorthodox relief pitcher Chad Bradford (Casey Bond) and Boston Red Sox castoff Scott Hatteberg (Chris Pratt) paid off in spectacular fashion, but Beane also relied on old-school instincts at times, as when he traded away future star Carlos Peña (Adrian Bellani) and party-boy Jeremy Giambi (Nick Porrazzo), despite their unquestioned statistical value.

If you're not a baseball fan, you probably don't know how the story of the 2002 A's developed on the field, or how it ended, so let's finesse that point by saying that they shocked everybody else in the game -- Beane's roster of nobodies was widely mocked when the season began, and the team started very poorly -- but the thrilling ride ended with mixed results. "Moneyball" will inevitably be compared to "The Social Network," and they're undeniably both long, leisurely, detail-rich stories of Information Age revolutions with long-lasting effects. But that isn't really fair to either movie; "Moneyball" is meant as a classic tale of Podunk heroism, far closer in spirit to, say, "Hoosiers" than to the ambivalent, Gatsby-hued saga of "Social Network." I also wouldn't argue that "Moneyball," enjoyable as it is, belongs in the same class. At 133 minutes, it's a fair piece too long, and I mourn for the wonkier docudrama approach we might have seen in the aborted Steven Soderbergh version. But it's an honorably crafted movie-star spectacle with a generous spirit and enormous popular appeal, and it happens to be about my team's most extraordinary season. You can't expect me to resist.