Rick Perry is officially blowing it

Suddenly, conservative elites are speaking out: What have we gotten ourselves into here? 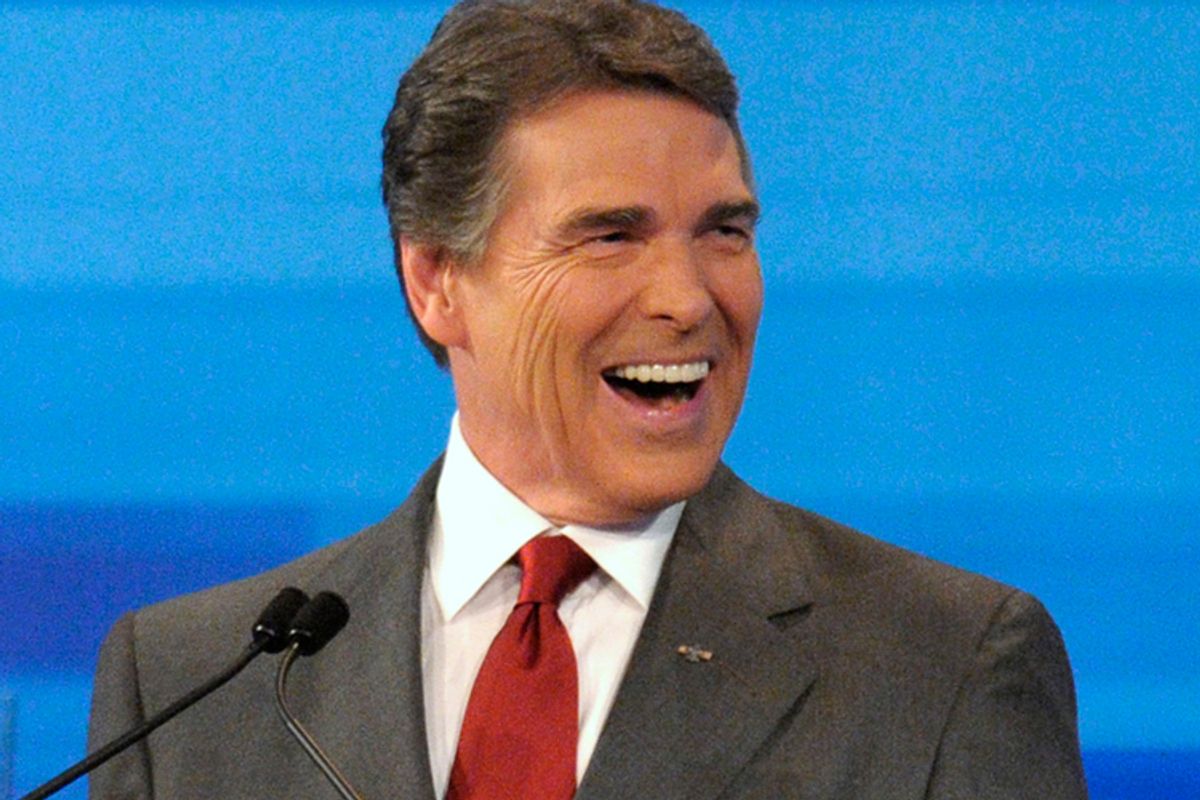 Rick Perry sure knows how to mess up a good thing. When he entered the presidential race last month, the Texas governor had an extraordinary opportunity. The GOP base had strong, deep reservations about Mitt Romney, the only other heavy-hitter in the race, so if Perry could satisfy their thirst for purity while demonstrating competence as a candidate and campaigner, he'd be well-positioned to unify the party and run away with the nomination.

But he is failing at both tasks. His performance in last night's debate and the scathing response it has stirred from conservative opinion-shapers offers a vivid illustration of what's going wrong for Perry.

First, there's the matter of ideology. Part of the promise of Perry's candidacy was that he would be a natural match for the Obama era Republican Party base, which is no longer satisfied just hearing the right rhetoric from its leaders -- it wants to believe that they mean it. This is why Romney was -- and still is -- so vulnerable. The words are there, but so are memories of his Massachusetts healthcare law and the array of moderate positions he took during the first decade of his political career.

It turns out, though, that Perry has his share of potentially disqualifying ideological baggage too. In a previous debate, his decision as governor to mandate an HPV vaccine for teenage girls led several of the no-shot conservative candidates (led by Michele Bachmann) to pile on, decrying this supposed violation of parental rights and endorsement of teenage sexual activity. The fringe candidates may not have helped themselves much, but they did succeed in seeding doubts about Perry among the religious conservatives who account for a big chunk of the GOP base.

In last night's debate, a different Perry vulnerability attracted more attention: his support for allowing the children of illegal immigrants to pay in-state tuition rates at Texas colleges and universities.  When the question came up, Perry was defiant: "[I]f you say that we should not educate children who come into our state for no other reason than they've been brought there by no fault of their own, I don't think you have a heart." This led to another pile-on, with Rick Santorum calling Perry "soft" on immigration and Romney claiming that the tuition break was a magnet for illegal immigrants. Perry's posture may be smart politics back in Texas, where Hispanic voters make up a considerable share of the electorate, but when it comes to the national GOP's Tea Party base, it's a serious sin.

By itself, the fact that Perry has vulnerabilities on his right is not necessarily a campaign-killer, especially given the history of Romney, his main opponent. But a much bigger problem is also coming into focus: Perry is a terrible debater who is slow on his feet and has some basic policy blind spots -- and it's starting to rattle Republican opinion leaders.

Perry has participated in three presidential debates now, and his performances have been shaky in all of them. But last night took the cake. On a question about Pakistan, he offered incoherent gibberish that made it clear he was entirely unprepared to discuss the subject. When he was handed a ridiculously easy opening to remind the audience of Romney's past crimes against conservatism, he utterly flubbed it, seeming to lose his concentration and spitting out this response:

I think Americans just don’t know sometimes which Mitt Romney they’re dealing with. Is it the Mitt Romney that was on the side of ... against ... the Second Amendment before he was for the Second Amendment … was it was ... before he was before these social programs, uh, from the standpoint he was standing, uh, for Roe vs. Wade before he was against Roe, uh, Roe vs. Wade … uh … he was … uh for Race To The Top … uh … [pause] … he’s for Obamacare and now he’s against it … I mean, we’ll wait until tomorrow and, and, and wait to see which Mitt Romney we’re really talking to …

And, as has been his custom, he seemed far less focused and energetic as the night wore on. But Romney was sharp and on-point the whole time. He offered his own share of incoherent nonsense -- see, for instance, his response when Perry mentioned that a new edition of Romney's book had scrubbed a reference to making the Massachusetts healthcare plan a national model -- he knew how to sell it. Unlike Perry, Romney was confident and polished, feigning confusion over why anyone would challenge his conservative credentials and insisting he'd been a model of consistency.

The key here is that the Republicans who influence mass opinion in the party seem to be noticing this, and speaking out. After last night's debate, Bill Kristol's Weekly Standard opined that "no front-runner in a presidential field has ever, we imagine, had as weak a showing as Rick Perry" and called it "close to a disqualifying two hours for him." Michelle Malkin ridiculed him for his inability to formulate intelligible responses. David Limbaugh pronounced himself "concerned" that Perry is in "deep trouble." Erick Erickson called his performance "a train wreck." And on and on.

This has got to be a scary combination for Perry. There are already polls showing that he'd fare markedly worse against Barack Obama than Romney. It's arguable whether those numbers really mean much at this early date, but the more debate performances that Perry turns in like last night's, the more he'll give his party's opinion-shaping elites reason to believe he really does have an electability problem. And if that's their conclusion, then they can use immigration, HPV and Perry's other ideological impurities to turn the base against him.

It doesn't have to play out this way, of course, but it's getting easier by the day to see how Perry ends up blowing his golden opportunity.