Terrorism at a Thai brothel 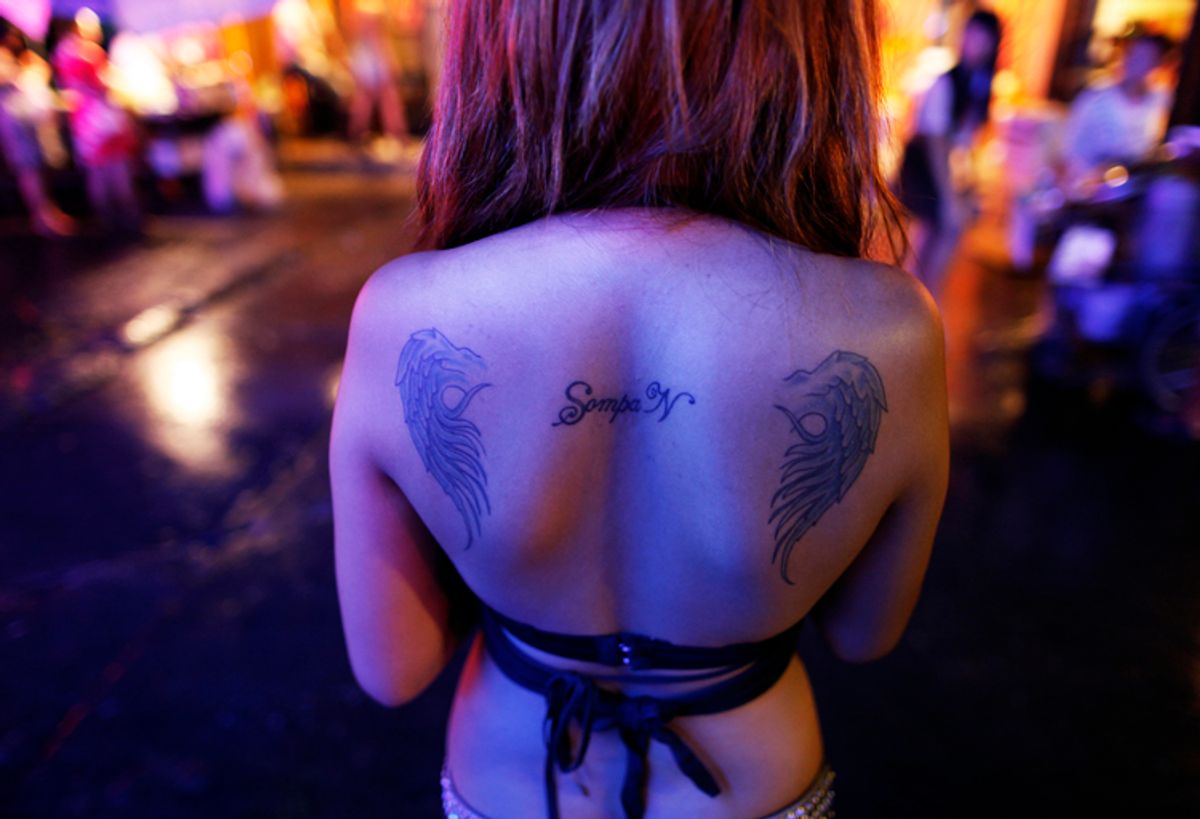 BANGKOK, Thailand -- There are no battlefield guarantees in Asia's bloodiest Islamic insurgency, a jihad in Thailand's tropical south that has ended nearly 5,000 lives.

But there are a few rules of thumb. In their self-proclaimed "holy war" to carve out the world's newest Muslim state on the Thai-Malaysia border, jihadis consider soldiers, cops, Buddhist monks, government teachers and their Muslim collaborators as fair game. Backpackers partying just a short distance up the coast are left alone.

But less mercy is offered to a different sort of tourist: Malaysian men, many fellow Muslims, border-hopping into insurgents' turf for paid sex. Now, after a bloody Sunday night bombing spree in their favored brothel town, Malaysia's government is warning its men to stay away.

Shortly after sunset on Sept. 18, in the gritty Thai border town of Su-Ngai Golok, a series of explosions erupted on a busy lane lined with hotels, food stalls and karaoke joints.

Televised mobile-phone footage shows pyres raging in front of a bar fitted with Christmas lights, Thai code signaling the availability of cheap beer and hands-on female hostesses. A half-naked man, his clothes singed and shredded, is seen sprawled nearby in the street.

Five were killed in the bombings, four of them Malaysian. Roughly 110 were wounded, some severely. If Islamic insurgents aimed only for men on the prowl, they failed: A 3-year-old Malaysian boy was among the dead.

The attack is surprising, even for insurgents known for beheading Buddhist monks and torching village headmen in the street. Though Malaysian tourists have been targeted before, such strikes are rare and have never caused so many foreign deaths in one night.

Worse yet, the attacks signal jihadis' heightened brazenness and stomp out any flickering promise of peace talks.

Just months ago, Thailand's military acknowledged secret meetings with separatists, whose ultimate goal is restoring a Connecticut-sized sultanate called "Patani." At the turn of the 20th century, Thailand (than called Siam) seized the tiny kingdom and claimed dominion over its Muslim, ethnically Malay inhabitants.

More than 100 years later, armed resistance to Thai rule has hit its stride. Since a 2004 declaration of renewed jihad, more than 4,700 have died and insurgents have evolved into Taliban-worthy bombers. In 2007, a particularly bloody year, jihadis in Thailand managed 91 bomb deaths -- 13 more than that year's bombing death toll against U.S. and allied troops in Afghanistan.

As a younger wave of Islamic militants grows more agile and lethal, they appear more distant from an old-guard of separatists willing to negotiate with the Thai military.

Quasi-secret peace talks, which seemed to offer a twinkle of hope just months ago, have collapsed. "It's closed. It's finished," said Kasturi Mahkota, a senior member of the separatist group Patani United Liberation Organization.

But perhaps the separatists willing to negotiate have nothing to surrender in the first place.

Kasturi and other old-guard leaders have proclaimed an alliance with the insurgency's backbone militia, BRN-C, and claimed joint responsibility for roughly 80 percent of attacks. In reality, he and his ilk are "pretenders to the cause" according to insurgency expert Zach Abuza in an Institute for National Security Studies report released this week.

They consist of "a few exiles in Malaysia and Europe who command no forces and do not have the loyalty of men on the ground," according to the report.

The real killers abhor the thought of negotiation. They're also more radical than ever, said Sunai Phasuk, a senior researcher for Human Rights Watch, who has documented the insurgency for more than a decade.

"It's a liberation war," he said. "They do not believe in coexistence with the Thai population. They aim to win the war by wiping Thailand clean of non-Malay Muslims."

Muslims from Malaysia, who share customs and language with Malay-speaking natives in the insurgents' territory, are seldom attacked in Thailand -- unless they're loitering around spots deemed decadent by jihadi hardliners.

"They feel an ideological justification to target vice: brothels, karaoke joints, nightclubs," Sunai said. "They want to send a message that, as a Muslim, you shouldn't get involved in dirty activities."

Thai authorities, however, seem to hate acknowledging insurgents' ideological motives. Police are apt to cast them as rudderless bandits and smugglers. Within hours of the Su-Ngai Golok attacks, a senior officer announced, with little proof, that the bombings were retaliation for cops seizing 100,000 meth pills earlier that week.

Dismissing the rebels as mere criminals diminishes an unpleasant thought for Buddhist Thai authorities: that an estimated 8,000 armed separatists believe Allah condones their killing. Calling them drug runners also strikes at the jihadis' proclaimed piety; a Muslim can only boast of so much righteousness if his living comes from smuggling bundles of meth.

But just as the Taliban is believed to fund attacks with Afghani heroin, proclaiming its jihadi credentials all the while, many experts believe Thailand's insurgency is similarly tied to the drug trade.

"Some are funded by underground business like contract killings, drug smuggling and human trafficking," Sunai said. "That doesn't mean they don't also have political motives. They can be paid to attack by drug lords who are unhappy with law enforcement ... killing two birds with one stone."

With peace talks appearing futile, and jihadis growing more bold, hopes of settling Thailand's insurgency appear bleak. In the estimation of Abuza, the terror expert, the rebels aren't winning "but they are also not losing, which, in an insurgency, is often enough."

Many of the remaining ethnic Thais, roughly 15 percent of the population, have stockpiled guns and assembled all-Buddhist militias. The rest have simply fled the region.

A turn in the road appeared several months ago when Prime Minister Yingluck Shinawatra, then on the campaign trail, traveled to the region in a red hijab and promised a semi-autonomous zone to give local Muslims greater political power.

But after her July election victory, the new premier's cabinet dismissed her pledges as mere ideas. Prominent academics and non-separatist Muslim groups have pressured her to honor her campaign commitment. "I think it's finished," Kasturi said. "That was just for the election. Now they don't dare talk about it."

Given doubts that aging rebels in exile can reign in young militants, it's unclear whether any action by the Thai state would soothe the insurgency. The new breed does not appear willing to sit down for tea with the Thai military or even issue public declarations. They prefer to speak through violence and the occasional handwritten threat scattered around their victims' corpses.

"There will be no negotiation with our enemy. We will not accept any compromise. We will not debate in the parliament," says one written screed acquired by Human Rights Watch.

"We will purge all Siamese infidels out of our territory to purify our religion and culture ... we will establish our country as a Muslim country to be recognized internationally."