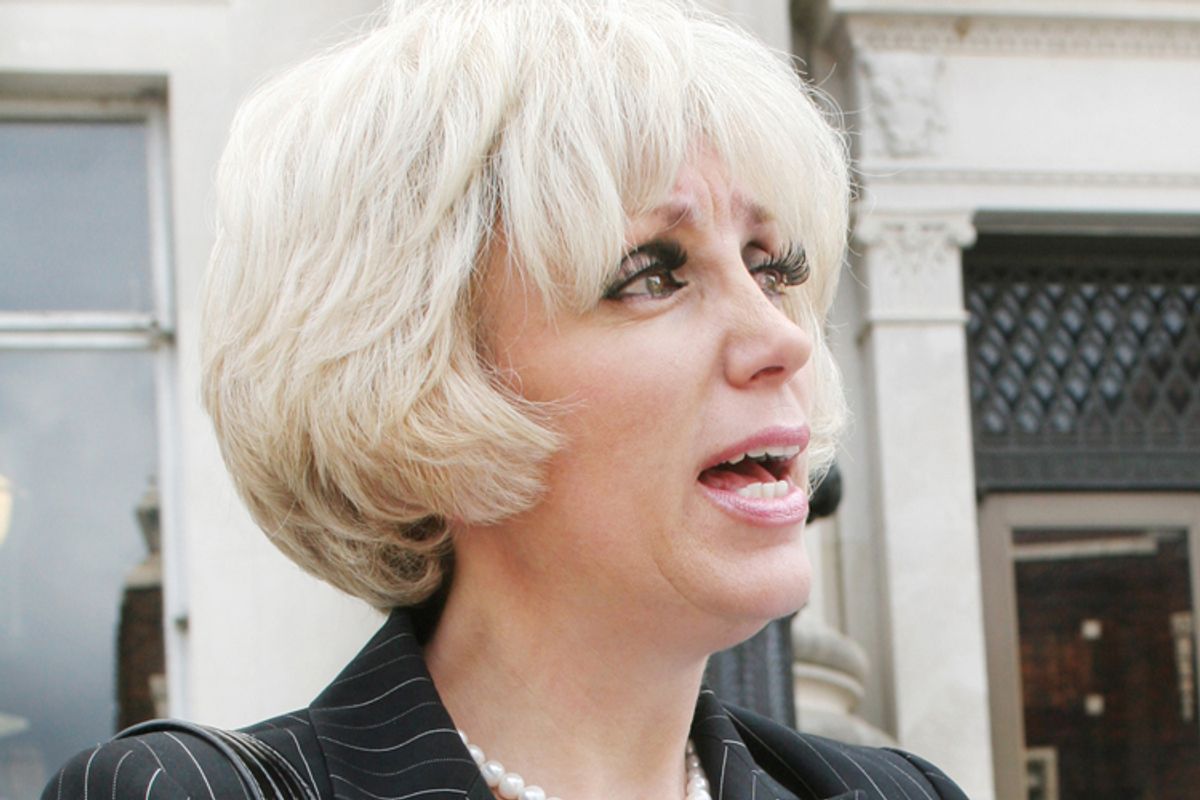 President Obama released his long-form birth certificate months ago, but leading Birther activist Orly Taitz is still insisting to anyone who will listen that the president is not a natural-born citizen. Last Thursday she traveled to Capitol Hill to make her pitch to staffers for some of the most influential conservative members of Congress, some of whom were apparently quite receptive to her message.

Taitz told me she flew on the red-eye from her home state of California to Washington  for a series of meetings on Thursday with aides to Reps. Steve King (R-IA) and Allen West (R-FL), and Sens. Marco Rubio (R-FL) and Jim Inhofe (R-OK), among others.

"The ones that were most positive was a meeting with two counsels for Marco Rubio. They read all the pleadings, they are aware of the issues," said Taitz, reached at her Orange County dental office.

She now believes both that the birth certificate Obama released in April is a forgery and also that Obama is committing "clear social security fraud -- for which anybody would be in prison."

The two Rubio staffers, according to Taitz, were general counsel Leonard Collins and legislative assistant J.R. Sanchez. Rubio's office did not return a call seeking comment, but here's how Taitz described the encounter on a Birther website:

They were very supportive and very helpful. One of them is Leonard Collins; the other is J.R. Sanchez. Although maybe not as much as Sen. Coburn’s chief of staff, they are very much aware of what is going on. As a matter of fact, in my presence, they went online to the Selective Service website, and they checked their own Selective Service registration to make sure that indeed, when you answer with your full name, your birth date, and your social security number, you can get verification. Each one of them went online and did it for himself to make sure that this indeed was correct. Assistant Legal Counsel Sanchez was very supportive, and he actually got in touch with Mr. Jipping, who is the legal counsel for Sen. Orrin Hatch. Hatch is the ranking member of the Senate Judiciary Committee. Both Mr. Sanchez and Mr. Schwarz urged Mr. Jipping to give me an opportunity to testify before the Senate Judiciary Committee.

A spokeswoman for Allen West confirmed that the congressman's chief of staff, Jonathan Blyth, met with Taitz on Thursday, but she maintained the congressman has no interest in Birtherism.

"This is a woman who came by to drop off some material and the chief of staff was polite enough to answer her questions," said West spokeswoman Angela Sachitano. "[Blyth] was quiet most of the time."

Taitz maintains that Blyth "promised if the issue comes along, West well vote in favor of disclosure for application of a social security number that Obama is fraudulently using, and access to the original birth certificate."

West himself has previously flirted with Birtherism.

Taitz tells me her goal in all this is to obtain for an invitation to testify at a congressional committee about her never-ending legal crusade to prove the president is not a natural-born citizen.

She said that Jonathan Nabavi, legislative counsel to Rep. Steve King (R-IA), "stated that they do follow the issue. They believe that the social security issue is much more explosive than the birth certificate issue."

King famously joked on the floor of the House last year, that " there's one [birth certificate] in this country we haven't seen."

Among the other staffers Taitz says she met with are: Michael Schwartz, chief of staff to Sen. Tom Coburn (R-OK); Holt Lackey, counsel at the House Judiciary Committee, chaired by Lamar Smith (R-TX); Luke Holland, a legislative assistant to Sen. James Inhofe (R-OK) (who once said Birthers "have a point"); and an assistant to Sen. Mike Lee (R-UT).

I've sought comment from all the offices involved and will update this post if I hear back.

Mrs. Taitz did not "meet" with our office in the widely understood sense. She arrived at our office unannounced and requested to speak with someone about a "homeland security" issue. She was afforded five minutes with a staffer. Once it was clear that her issue did not reflect one of critical national security importance, she was thanked and the meeting ended.