Why American politics is stuck in the 1980s 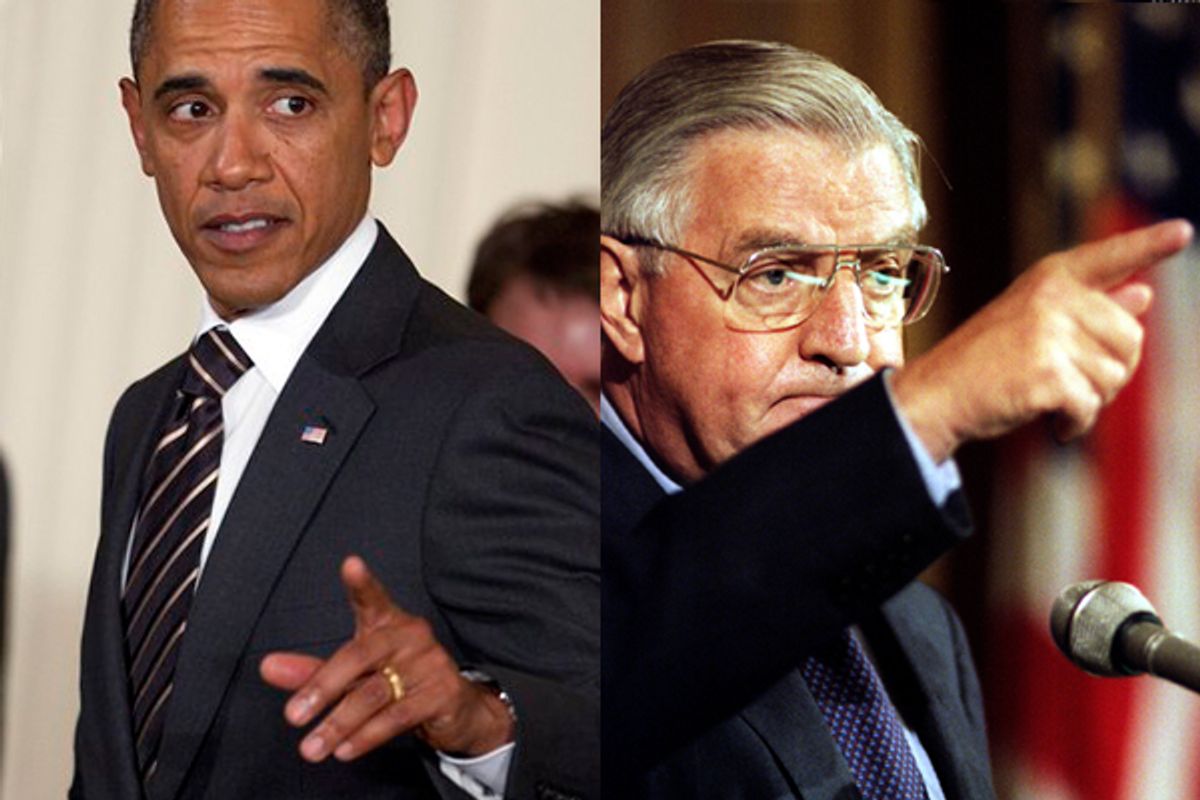 Whoever the eventual Republican nominee proves to be will recycle the claims of Ronald Reagan in 1984 that the formula for prosperity is more tax cuts for the rich and corporations. Meanwhile, Barack Obama combines the emphasis on deficit reduction of Walter Mondale in 1984 with the claim to cool technocratic expertise of Michael Dukakis in 1988.

Meanwhile, most of the "bold new ideas" put forth by pundits and policy wonks are actually the stale ideas of a generation ago. No doubt there are fresh waves of college students who, for example, find the idea of improving our educational system by means of charter schools and national testing unfamiliar and provocative. But those of us over 30 remember that the bold new ideas about school reform were also the bold new ideas of 2001 and 1991 and 1981.

If you went to sleep in the Carter years and woke up in the Obama years, you’d find many of the same people making the same argument about solar and wind power, which somehow are always only 30 years away from providing a major chunk of the nation’s energy. In the words of Yogi Berra, it’s déjà vu all over again.

The right is no different. A conservative Rip van Winkle who found he had overslept since 1980 and hurried to a meeting of the Federalist Society or read National Review would discover to his relief that he hadn’t missed any new developments in right-wing thought in the past generation. The Soviet Union is gone and the U.S. is at war in three Muslim countries -- that might be a surprise. But the right’s support for more military spending, more free trade and more cuts to social programs hasn’t changed since the Age of Disco.

On the basis of prolonged, up-close observation of politicians, I concluded long ago that few of them are any more likely than other human beings to reconsider their basic values or opinions after the age of 25 or 30. The cement of the mind starts to harden in the late 20s, freezing whatever was written on it in adolescence and early adulthood.

This would not be a problem, if young adults immediately came to power. But in all but the most unsettled, revolutionary societies, for very good reasons political leaders must undergo a long period of probation before reaching the pinnacles of their careers. This means, however, that on becoming president or prime minister the leader is likely to act on an understanding of the times and the world that is out of date, even though it might have been valid a quarter of century earlier.

The 25-year lag has existed throughout American history. When Abraham Lincoln and his fellow Republicans dominated the government during the Civil War and Reconstruction in the 1860s, they rammed through Congress a version of Henry Clay’s "American System" of tariff-based protectionism, federal aid to internal improvements and national banking, which Clay had promoted decades before.

By the 1900s, the Clay-Lincoln program was obsolete. Most major American industries protected by infant industry tariffs no longer needed them, and the U.S. would have been served by a turn toward more liberalized trade. But the Old Guard Republicans defended the old policy for three decades after it had become obsolete, until they were dislodged from power in the Roosevelt revolution of 1932. In the 1920s the Old Guard was still stuck in the mind-set of the McKinley era of the 1890s.

And so it goes. When Lyndon Johnson, an idealistic young liberal of the 1930s, became president in the 1960s, he naturally tried to finish the New Deal of his mentor Franklin Roosevelt. American foreign policymakers of his generation tended to act on the basis of the "lessons" they believed that they had learned from the 1930s: the Lesson of Munich (appeasement doesn’t pay) and the Lesson of Smoot-Hawley (free trade is always good, tariffs -- it was claimed -- cause depressions and world wars).

Ronald Reagan was elected president in 1980. Exactly 25 years earlier, in 1955, William F. Buckley Jr. had founded National Review, the magazine that became the center of "movement conservatism." The movement right rallied behind Barry Goldwater in 1964, when Reagan launched his political career, first as governor of California and then as president of the United States, by giving what was called "The Speech," a rehash of the themes of the 1950s conservative movement.

When Buckley-Goldwater conservatism triumphed with Reagan, it was already a generation out of date. The conservative policies of the 1980s reflected the ideas and values of the right wing in the 1950s.

Which brings us to the present. Obama and most of his staff and advisors are products of the 1980s and 1990s, in the same way that Reagan and the Reaganites were shaped by the 1950s and the early 1960s. Obama is the latest -- some may hope the last -- of the "New Democrats," foreshadowed by Jimmy Carter and symbolized by Bill Clinton.

The neoliberalism of the New Democrats was -- and remains -- a strategic response to the declining popularity of the New Deal in the eras of Nixon and Reagan. In the 1970s and the 1980s, Republicans successfully portrayed Democrats as soft on defense; therefore New Democrats must be hawks. The Reagan conservatives made gains among swing voters between the 1960s and the 1980s by denouncing big-spending liberalism; therefore, New Democrats must be fiscal conservatives who publicly obsess about deficit reduction. Jimmy Carter and Bill Clinton were center-right figures who won the presidency in spite of the distrust of the Democratic left; therefore, being denounced by the Democratic left is something that a New Democrat should welcome.

What about today’s Republican politicians, activists and thinkers? Many of them in their youth were hero-worshipping acolytes of Reagan, in the same way that an earlier generation of Democratic liberals idolized Franklin Roosevelt. But the Reaganism of today’s right is not the Buckley-Goldwater conservatism that in many ways peaked with Reagan’s election in 1980. Today’s so-called Reaganism has more to do with the peculiar shape that conservatism took between 1980 and 2008, when the Republican right adopted its program of perpetual deficits funded by tax cuts, with painful spending cuts postponed to the future.

This kind of free-lunch tax cut politics was possible only during the debt-fueled "superbubble" (the term is George Soros’) between the stagflation of the 1970s and the Great Recession that began in 2008. But like the Republican Old Guard of the 2000s, who kept pushing infant industry tariffs long after they were useful, today’s Republican conservatives mindlessly keep pushing tax cuts as the panacea for all problems, in a world that has radically changed.

Very few individuals, particularly hard-pressed decision-makers who lack the time to study and reflect, are capable of acknowledging that the policies that they have long favored may have made sense once only to become anachronistic -- or may have been wrong all along. To be sure, the younger generation can always be converted. Unfortunately, they are likely to undergo hardening of the mental arteries at the same rate as their elders, so that by the time the Generation of 2008 comes to power in 2033, they may be prepared to solve the problems we face today in a situation with completely different and new problems.

"Practical men, who believe themselves to be quite exempt from any intellectual influence, are usually the slaves of some defunct economist," wrote the economist John Maynard Keynes, who recognized the problem of the intellectual time lag. "Madmen in authority, who hear voices in the air, are distilling their frenzy from some academic scribbler of a few years back."

Keynes is said to have replied to a critic: "When the facts change, I change my mind. What do you do, sir?" Of all of Keynes’ heresies, the idea that people should reconsider their opinions when the world has changed may be the most radical.