The debate at Occupy Wall Street: To what end?

After nearly two weeks, the movement\'s members search for a plan -- and a meaning 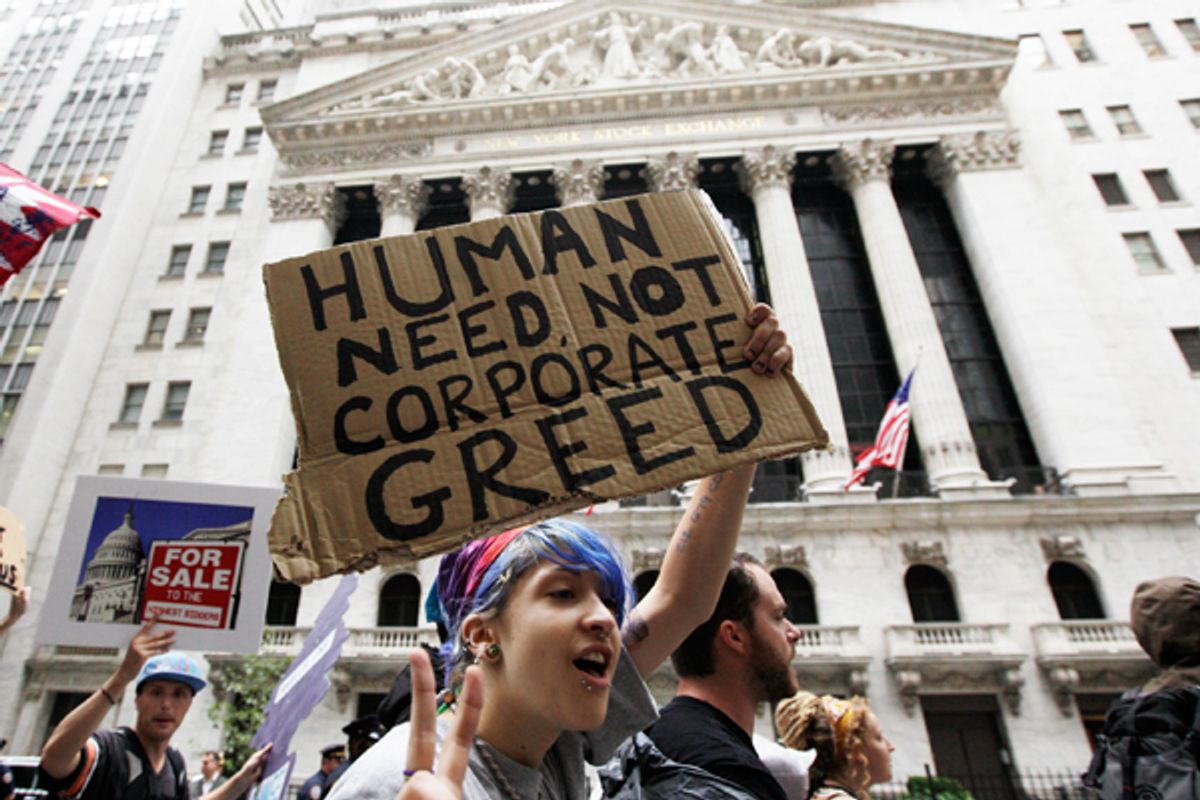 Four days after NYPD officers arrested dozens of Occupy Wall St. protesters (and pepper-sprayed a handful), a few hundred people are still occupying Zuccoti Park in lower Manhattan. I spent Wednesday afternoon interviewing protesters, observing their organizational procedures, and taking in their political debates, all unfolding under the watchful eye of police officers who are posted at the front and back of the park and plenty of journalists.

I found the same passion and anger that Salon's David Talbot experienced on his visit to Zuccoti ten days ago. But the protest has matured; some of the occupiers have been sleeping outside for over a week. There is now a debate raging over defining the goals of Occupy Wall Street, and indeed whether there should be concrete political goals at all. Oddly, despite the movement's name, "Wall Street" -- meaning the nexus of irresponsible bankers and traders headquartered in southern Manhattan -- did not figure in a lot of the conversation that I heard. This is about more than financial regulation.

This is a movement in search of a message, a community trying to define itself by listening. There seem to be two broad camps: one believes Occupy Wall St. should adopt a specific demand to address unequal distribution of wealth in America (views vary, of course, about what policy should be advocated to achieve this); while the other camp is focused on creating a spectacle that will create its own momentum, grow larger, and define its goals at some undetermined point in the future.

Twice daily, the protesters hold a general assembly meeting which, because police are not allowing loud speakers, relies on a call-and-response "human mic" system of amplification. That means it's not an ideal forum for complex political or strategic conversations; most of the announcements are practical or procedural. Much of the political dialogue takes place informally, in smaller groups around the park.

A taste of what was covered at Wednesday afternoon's hour-long general assembly:

--updates from the food committee and the comfort committee, which distributes blankets, dry clothes, et cetera;

--a reminder that 11 p.m. to 8 a.m. are quiet hours, as determined by community consensus;

--the announcement of a training session on how to talk to reporters;

--an update on progress in setting up a credit union account to handle financial transactions;

--an update from the sanitation committee, which reported praise for the cleanliness of the protesters from lunchtime regulars at the park;

--a call to members of any actors' union to try to reach out to other members to participate;

--an open offer to mend clothes;

--an invitation to a group meditation session;

--a message of support from Mexico, translated from Spanish;

After the general assembly, I listened in on a smaller group (click for larger image) tackling the big questions: What should be the goals of Occupy Wall Street, if any? Is it a protest or a movement? What is its direction?

One man wanted a simple "tax the rich" message. Another wanted to focus on rolling back the Supreme Court's Citizens United decision, which deregulated the campaign finance system.

There should be no sense of urgency about setting concrete political goals, a third argued. "We really have all the time in the world if people keep coming out here," he said.

A woman questioned the very idea of demands. "The media wants to box us in; don't let them trap us," she said.

"The goal is to expand this movement," said a fourth man. "Our demand? Join us."

I met one protester, Brooklyn librarian Chris Masiano (right), who was disheartened by what he called "the nebulousness and formlessness of it all." On his day off and attending Occupy Wall St. for the second time, Masiano was doing his best to nudge the direction of the protest by handing out pamphlets from the Democratic Socialists of America. The fliers outline an agenda of Medicare for all, a restoration of the right to form unions, and a range of other social welfare programs.

"The impulse to avoid top-down, centralized control by a small group of self-declared leaders is a healthy one," he said. "However, I do think that the opposite impulse that seems to be animating this project is frustrating."

Our conversation was briefly interrupted by a woman seeking directions to the group meditation session.

"That's a perfect example of the therapeutic aspect of [the protest]," Maisano said. He believes there is some value in that, but it's not enough.

"I'm in a union, and I'm very happy I'm in a union. I think it's still a very good tool to wage a defensive struggle to keep what you already have," he said. "But I think we need to build new organizations and institutions that are appropriate for our times that will enable working people and poor people to make gains. I don't think we've done that yet, and I hope [Occupy Wall St.] can be part of that process."

Another protester, Manhattan resident Bill Dobbs, sees the occupation of Zuccoti Park as an important first step. "It's a populist outcry. The hope is to spark more organizing," he said.

A self-described "gay civil libertarian" and a veteran of ACT UP, the political advocacy group that sprung up in response to the HIV/AIDS crisis, Dobbs told me there are two things needed for a protest movement to grow -- and he sees at least the potential for both in Zuccoti Park.

"When people found these two ingredients -- anger and fun -- ACT UP really took off, and that's when things began to move much faster."

I did count at least 20 reporters, photographs, and videographers around the park in the space of an afternoon, and early complaints about a media blackout seem to have faded. Indeed, there are plenty of articles about the protest this week, thanks in part to the NYPD. (The quality and tone of the coverage, of course, is another question.)

"I've been feeling impotent," said Chuck Baroo, a 71-year-old Rivderale resident who came down after first hearing about the protest this week on the radio. The Bronx, the borough of his birth, is the poorest urban county in the country, Baroo noted. "It's not gotten better, it's gotten worse," he said. Baroo's parents, who emigrated to the United States from Kashmir, "really believed in the country. I don't think they would recognize it today."

What does he want to see come out of the protests?