After the party and the White House failed to save her Senate seat, the ostensible Democrat aids polluters 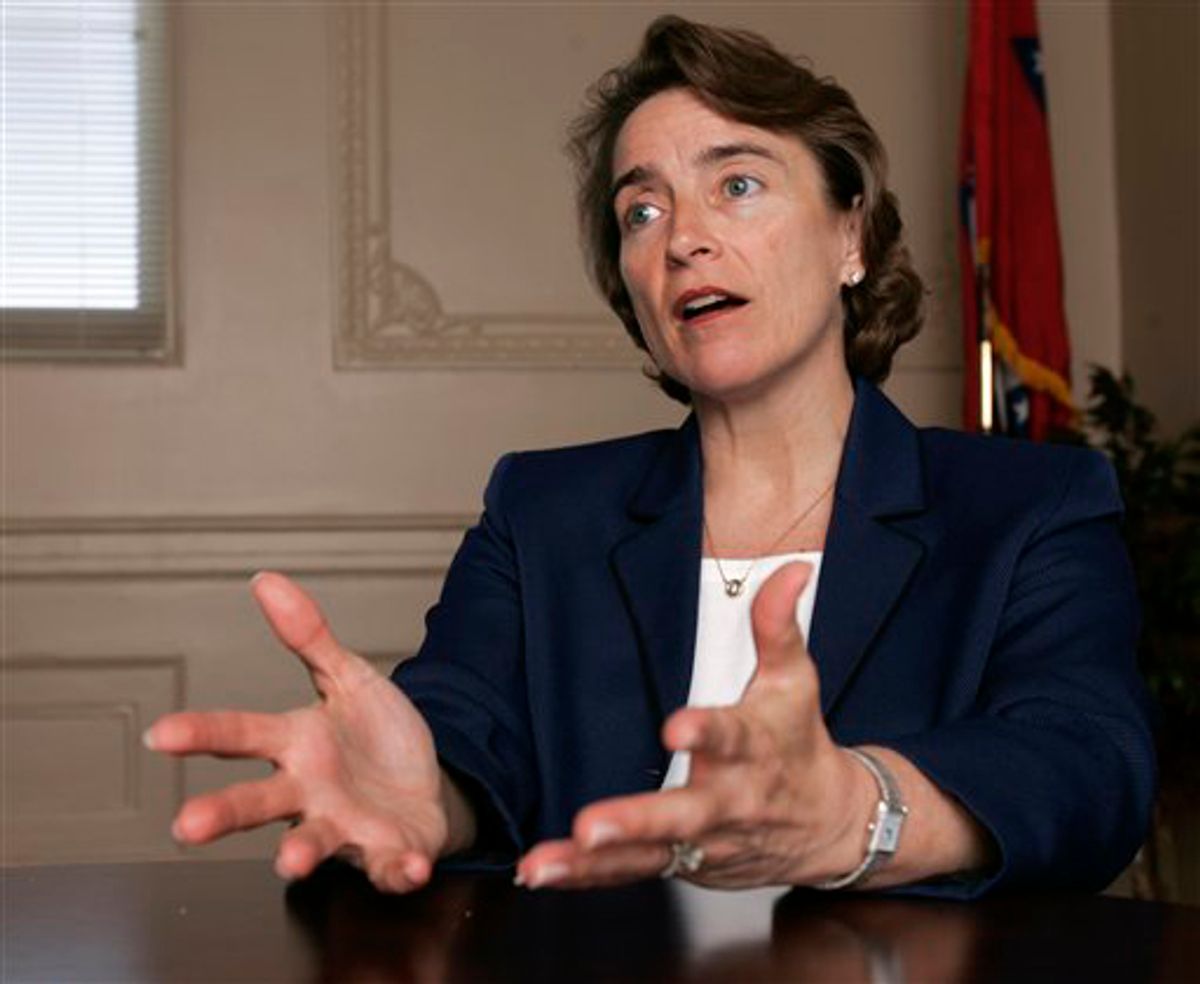 In this photo taken May 25, 2010, Sen. Blanche Lincoln, D-Ark., is interviewed at her campaign headquarters in Little Rock, Ark. In the home state of former President Bill Clinton, and elsewhere, party leaders and structures are being bypassed _ undermined, in some cases _ by free-agent candidates who declare their independence from the political establishment while aligning themselves with special interests. "This is an election like no other," says Lt. Gov. Bill Halter, a union-backed candidate who has forced Democratic Sen. Blanche Lincoln into a June 8 runoff. (AP Photo/Danny Johnston) (AP)
--

Last year, then-Senator Blanche Lincoln (D-Walmart) was facing a tough primary fight from a more liberal Democrat. With labor and progressive groups aligned against her, the White House and the Democratic Party jumped in to defend Lincoln. Bill Clinton himself campaigned for Lincoln, and the effort paid off: She lost to a Republican in the general election. And then she joined a right-wing interest group. And now she's fighting the EPA's plan to regulate greenhouse gases.

The National Federation of Independent Business is generally treated in the press as the official practically apolitical voice of American small business (and the press treats the word of "small business" with almost as much reverence as that of military generals) but it is, in fact, a conservative lobbying organization that has spent decades fighting for anti-labor, anti-environmental and anti-consumer policies, all in the name of protecting our cherished "independent businesses."

NFIB and Lincoln have teamed up to launch a campaign urging the EPA not to do anything about greenhouse gases, and she details her fight in an interview with Environment & Energy Publishing's E&E TV. It's not a very coherent interview, as Lincoln just repeats an endless flood of talking points (uninspired ones, too) and verbally treads water. She's a politician, not an expert on policy, or anything else. The basic idea is that there are too many regulations, and regulations are bad.

Monica Trauzzi: EPA hasn't yet sent its proposed rule of greenhouse gas emissions for utilities to OMB. The deadline is September 30. Do you take that as a sign that maybe there are some other regulations that they're thinking of rolling back on?

Sen. Blanche Lincoln: I certainly hope so. I mean, that is definitely what we've been aiming for is to make sure -- and you can go to our Website, www.sensiblereg.org, and that is where you can see these small businesses talking about what they face on a day-to-day basis, the cost of it, the time, how it is, you know, prohibitive towards them being able to reinvest their resources into their businesses to create new jobs. And it's not just the new regs that come out, it is the uncertainty of what happens. You know, you're exactly right, delaying that greenhouse gas emission rule is something that should be done if we don't have all the facts, if we don't have the appropriate cost-benefit analysis, if we don't have the appropriate analysis of what, you know, is going to actually happen with that. OMB has got to have -- I mean, sometimes it can take them two or three or four months, you know, to get that information out. And that is absolutely appropriate and it should not go forward until we have all that information. But when there are over 4200 new pending regulations out there, it just creates this unbelievable arena of uncertainty in businesses large and small, but particularly small, because they get hit harder. They're not going to take their own money and spend $10,000 or $10 million, because they don't know what those types of regs are going to cost them.

This is all fairly standard-issue Republican cant. Which isn't surprising: The oil and gas industry were another of Lincoln's major funders. (Lincoln also received more money than any other Democrat from ALEC, the organization that helps major industries write their own right-wing legislation in statehouses across the country.)

Blanche Lincoln's loss proved that out-Republicaning the Republicans is an insane way to try to win an election, but Democrats never bother to learn that lesson.