The GOP's nuisance candidate syndrome is back

Rick Perry was supposed to rid his party of its plague of embarrassing fringe candidates. So far, he's failing 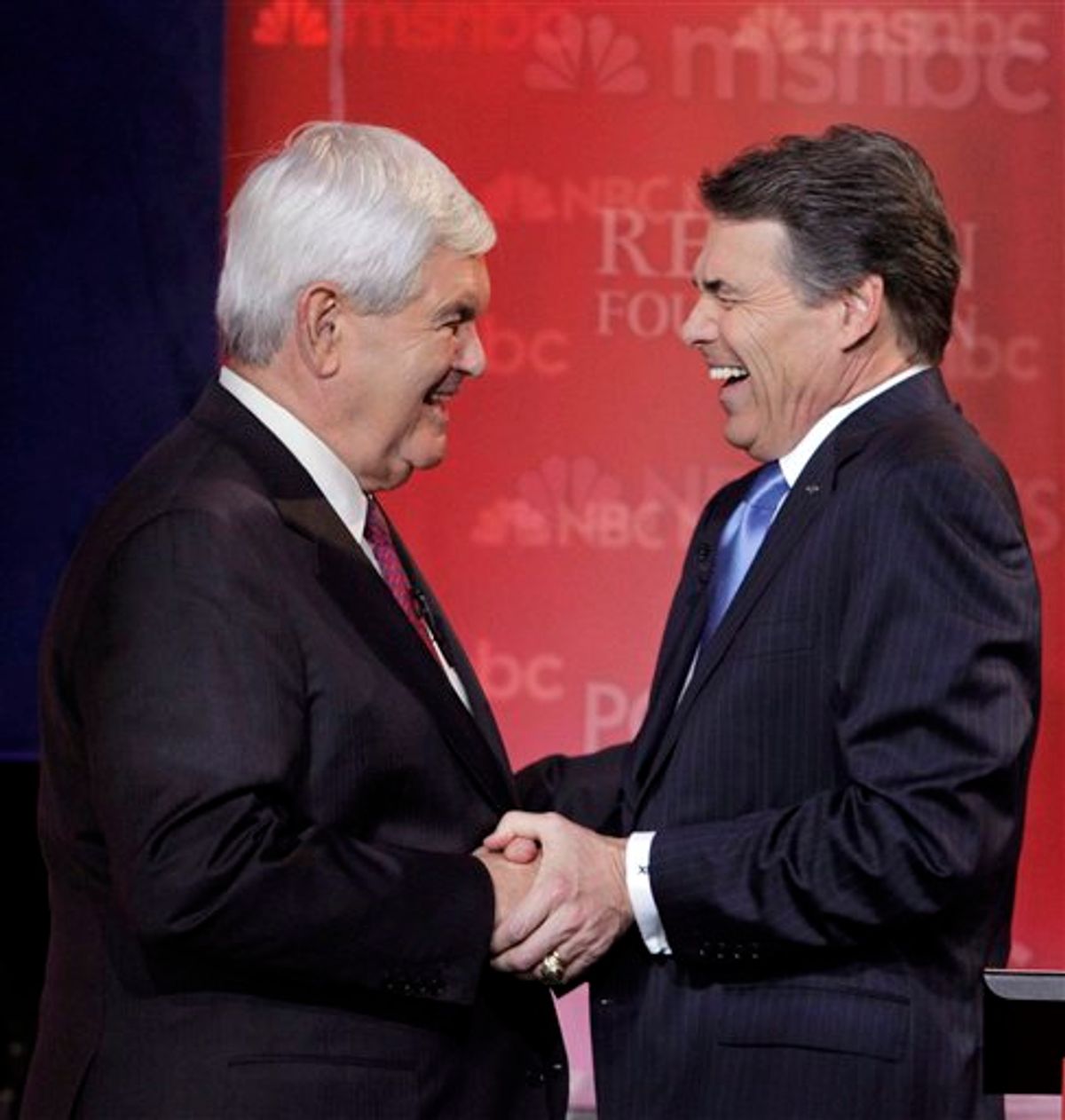 It may be the surest sign yet of Rick Perry's failure to meet his potential: Two of the GOP's nuisance candidates are suddenly rising from the dead.

Perry's entrance last month was supposed to put these folks in their place once and for all. It was not supposed to produce polls like the one Fox News released Wednesday night showing Herman Cain and Newt Gingrich both tripling their support in the last month -- at Perry's expense. And just like that, it's starting to feel like the Republican race is back to where it was in the spring and summer months, when it was defined by a bizarre volatility that gave almost every has-been and fringe figure in the running a turn in the spotlight.

Cain's moment, you may recall, lasted about a month, from early May (when he stole the show at a Fox-televised debate that Mitt Romney skipped) to early June, when Bachmann joined the field and stole the show at the next debate. And before the Cain and Bachmann moments, there was also the brief explosion of interest in Donald Trump's fake candidacy. There was even a point at which Gingrich's prospects of victory were seriously discussed (until, of course, Newt opened his mouth again).

No matter whose turn it was, the pattern was the same: Some sort of triggering event, followed by an encouraging poll or two, ramped up media coverage, even better poll numbers, a surge in fundraising, even more media coverage, and a sudden consensus that the candidate just might have more staying power than we all thought -- at which point the moment would end and it would be someone else's turn.

This was all a symptom of the GOP race's comically high ratio between fringe candidates and actual viable contenders. Until Perry got in, only Romney and Tim Pawlenty had the realistic potential to win the nomination, but neither of them moved the needle for the conservative masses. That's why there was such a gigantic opening for Perry: The base was looking for a new, "pure" candidate to rally around, while the party's more pragmatic players were looking for someone who could excite the base while also assembling a serious, well-funded and winning national campaign. Perry, the charismatic, conservative, and long-serving governor of the nation's second largest state, seemed like a potential match.

And at first, he was. Just look at what his entry did to Bachmann. When Perry declared his candidacy in mid-August, she was running in a virtual tie for first place in Iowa polls, climbing into double-digits in national surveys, and rising in other key early state polls. And just hours after he made his declaration, she won the Iowa straw poll -- a result that was supposed to certify her as a legitimate contender to win the actual caucuses this winter (and to cause massive headaches for the GOP well into the primary and caucus season). But almost instantly, her press coverage dried up, her poll numbers collapsed, and her fund-raising withered. Finally, a genuine conservative heavyweight was in the race, and the Republicans who had flirted with Bachmann in their mid-summer ennui were flocking to him.

Perry's entrance also made life hell for Cain, who had already been eclipsed by Bachmann two months earlier. This week, in fact, Cain even admitted that he came close to quitting the race in frustration on two occasions -- presumably during this period. And then there was Newt, poor Newt, the butt of everyone's jokes all summer -- especially when he took off for a campaign swing to the crucial primary state of Hawaii as soon as Perry entered the race. Amateur hour was over, or so it appeared.

Except that it turns out Perry himself is sort of an amateur. His campaign rollout was full of passion, although some Republicans were a little unnerved by his overheated antics. Still, the base rallied to him and he quickly opened a double-digit lead over Romney, with everyone else approaching asterisk territory. But then came the debates, with Perry's performance going from mediocre in the first to troubling in the second to downright dreadful in the third. Along the way, his own crimes against Obama-era conservative orthodoxy were revealed, tarnishing the ideological purity that had been one of his selling points. It's gotten so bad for Perry, in fact, that there are conservatives who now say that he has a bigger problem with the GOP base than Romney.

And so the volatility that gave the Republican contest a freak show quality earlier this year is back. In the last Fox News poll, a few weeks after Perry jumped in, Cain's support had fallen to six percent while Gingrich's was down to three. But in the new poll, Cain has surged to 17 percent -- the first time since early June he's shown life like this. And Gingrich's support has rocketed to 11 percent. Meanwhile, Perry's support has dropped from 29 to 19 percent. He's now trailing Romney -- the first time that's been the case in a long time -- and barely ahead of Cain.

For the time being, at least, Republican voters are back to flirting with the nuisance candidates. Cain, remember, entered the race with virtually no name recognition. He'd been a low-profile CEO of a second-tier pizza chain, lost a primary for a U.S. Senate seat in Georgia by nearly 30 points, and hosted a radio show out of Atlanta. He looked like the second coming of Morry "The Grizz" Taylor, not a real candidate. But Perry's self-inflicted wounds have conservatives looking around again, and Cain has capitalized nicely, turning in a well-received debate performance last week, and then using a strong speech to score an upset win at last Saturday's "Presidency 5" straw poll in Florida -- a humiliating verdict for Perry, who had invested heavily in the contest. It's May all over again for Cain: His poll numbers are moving, money is coming in, and the media is taking notice.

And how delighted must Newt be? He offended virtually the entire party in his first interview as a candidate this spring, after which an Iowa Republican confronted him and called him "an embarrassment" on national television. Sometime after that, his entire senior campaign staff quit. He still has no money and no organization to speak of, but his feisty debate performances have been a hit with the live studio audiences, and apparently with viewers at home. Like Cain, he's benefiting from Perry's woes.

Only Bachmann isn't enjoying a piece of the action, and it's pretty obvious why. In her thirst to reestablish relevance,  she followed up a strong second debate performance by suggesting that HPV vaccines cause girls to become mentally retarded. That was too much even for Rush Limbaugh. Bachmann's support is down to just three percent in the new Fox poll.

The Cain/Gingrich surge tells us that they've handled themselves pretty well these past few weeks. And while neither will be the nominee next year, each could impact the outcome, perhaps by taking away votes and altering primary and caucus results or by forcing one of the heavyweights into an uncomfortable situation at a debate. But their return from the dead tells us a lot more about Perry's own failure as a candidate. If he was doing what he was supposed to be doing, we'd be talking about him and Romney right now -- and no one else.