According to Pulitzer-winner Daniel Yergin, the fossil-fuel tipping point is a myth. He explains what that means 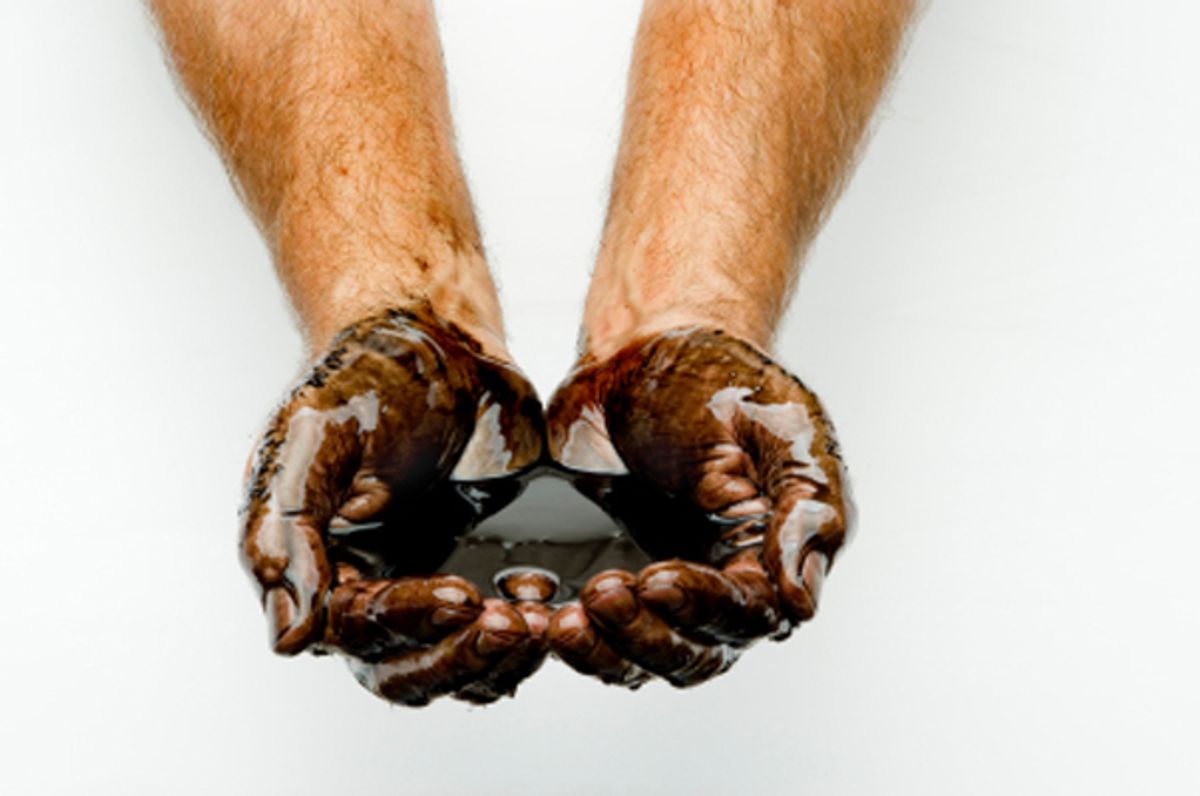 Remember summer 2008? OK, maybe you'd rather not. It was a rough time for American drivers. An oil crisis had shot gas prices up to a wincing all-time high of $4.11 per gallon, squeezing our wallets and causing widespread panic. For many people, it was a troubling sign that America's oil addiction was becoming harder and harder to sustain. And although prices have scooted down (and up, and back down) since, for many of us, it was a wake-up call that gas prices are not only hard to predict -- but that the world's oil supply seems to be rapidly dwindling away.

In "The Quest: Energy, Security, and the Remaking of the World," Daniel Yergin, the Pulitzer Prize-winning author of "The Prize," tackles both this anxiety and its root causes.  The book is an enlightening and detailed historical survey of how man has discovered and harnessed various energy sources, from oil to wind, electricity to shale gas. Although Yergin focuses on the people behind these discoveries -- we learn, for example, how a 19th-century mountaineer's obsession with understanding why the sky is blue led to the discovery of the greenhouse effect -- he adeptly explains the often-complicated political and economical backdrop to these revolutionary feats.

Yergin spoke with Salon over the phone, about our overblown peak oil fears, China's energy future and the value of energy efficiency.

You address an important question that has fazed many people: Is the world going to run out of oil? Some people say it will -- and quite abruptly. This is peak oil theory. You say otherwise.

The peak oil argument is that we are already halfway through the world's endowment of recoverable oil. The argument that I am making is that the endowment is much larger, and technology keeps enlarging what we can recover. Case study No. 1 is offshore Brazil where you have what is called presalt [oil found under a thick layer of salt lying just beneath the seabed]. It was inaccessible up until a few years ago. It is very large and will likely make Brazil one of the powerhouses of world oil production. Case study No. 2 is North Dakota. The Bakken formation [a rock formation yielding shale, or "tight" oil] was producing, a few years ago, 10,000 barrels a day. Now it is producing about 450,000 barrels a day. That came as a surprise. Five years ago, no one would have thought that North Dakota would be the fourth-largest oil-producing state in the country, but that's because of advanced technology.

There have been recurrent periods of great fear of running out of oil and it goes back to when oil was first developed as a commercial business in western Pennsylvania in the 19th century. It was always mysterious and people were predicting it would come to an end and we'd have to go back to using whale oil or coal or so forth. But each time there is this anxiety, what happens is new technology, new innovations, new areas open up, and the supply picture suddenly looks much better. So this current peak oil discussion is really the latest manifestation of what has been a recurrent feature since people started using and developing oil. But when you look at the numbers, we see that there is an additional supply coming in. My view is that rather than facing an imminent decline we'll see production of oil liquids continue to expand for a few more decades and then it'll come to a plateau. It won't necessarily fall off sharply.

But this is not to say that everything is fine because, first of all, new resources have to be developed and that requires investment and time. Secondly, it does go back to what I call the aboveground risks, which are the geopolitics: conflicts within countries, what governments want to do. There are many things to worry about but with adequate investment and progress in technology, we can meet the supply needs.

But what about China? We constantly read headlines about China's booming consumerist class and its growing demand for cars. What about developing countries? Their energy consumption rates are also going to rise rapidly.

There is a split in the world right now—the U.S., Western Europe and Japan's consumption of oil is actually going to go down, because we are going to be driving more efficient cars by 2025. New cars are supposed to get up to 64 miles to the gallon.

A decline in oil reserves may be seen, but now, in 2011, we don't know whether a decline in 2040 or 2050 will be because of physical constraints on available supply, or because, in fact, the Chinese have bought all the cars they are going to buy, and they're driving more efficient cars, and maybe some of those cars are electric cars. Maybe [the decline in oil consumption] we've seen in developed countries is something that will happen in a few decades in these countries that are so rapidly going up the economic ladder. For China, energy efficiency is one of their high priorities.

You write about energy efficiency. In your view it's something grossly underestimated in discussions about energy.

OK. But just thinking of myself as one individual, it can be kind of hard to conceptualize the societal impact of my decision to, say, buy an Energy Star fridge or a more fuel-efficient car.

But there are some cultures where the idea of conservation is much more deeply imbedded. I talk about Japan. It is a country that has developed without resources. They import virtually everything.

Right. There is a Japanese term you mention ...

"Mottainai": too precious to waste. It's really a deep-seeded cultural value.

The U.S. has been deeply blessed, since its foundation, with ample resources. That gives us a different kind of mentality. But I remember a time when energy conservation, or efficiency, was a sharply divisive question. I am struck -- and I find this a hopeful sign -- that across the spectrum today, energy conservation is embraced as a major component in meeting our energy needs for the future. If you look at the emphasis on sustainability and how that has become part of the value system of so many Americans, you really see a shift in thinking.

Is this shift the result of having suffered some economic crises? I'm thinking about the 2008 oil crisis.

That oil crisis really did shift the way people think. You could see it in what people thought about when they bought a vehicle. If you look at Detroit in 2007, it was still all about SUVs because that is what it seemed the public wanted. Now they are planning very different types of cars with a commitment to building efficiency into these vehicles. That is a big swing. Automobile makers can't just turn on a dime, because it takes five years to bring a model out and there is a lot of investment in production lines. But look at what they're advertising today. There is a big emphasis on how these are efficient cars.

I think the $147 oil barrel in 2008 actually did one of the things prices can do and that is change the way people think. Price really matters. It's a piece of information. Depending on what the price is, it says to you: keep doing what you're doing; or, innovate, become more efficient, find alternatives, make changes and develop new supplies.

"Energy security" is one of those ubiquitous terms people use all the time but that is hard to define. Can you explain it for us?

Our $14 trillion economy rests on an energy foundation and we basically depend upon reliable flows of energy to keep everything going. Not just the proverbial keeping your lights on, but keeping everything on, including the Internet. So the question of energy security is what are the threats and risks [to these flows], and how to manage them. Those threats and risks cover a very broad range, from disruptions in supply because there is a conflict in the Middle East, to what the CEO of Sony called the "bad new world" of cyber vulnerability, to natural disasters -- we've had several episodes in the U.S. in the last several years when electricity has gone down in different parts of the country and life was paralyzed.

The best thing about energy security is when you don't have to think about it because you are secure.

There are a lot of things to keep track of, though, from protecting infrastructure to having the right equipment. But the politics behind all of this is very complicated. I don't think people think about this on a day-to-day basis.

I think it's true that we just take the flow of energy -- as we should -- for granted, but it's a very complex system that delivers our electricity. It delivers fuel that keeps our cars going, our airplanes in the sky. In terms of oil, it is a vast, global system and the scale of it is enormous.

One of the refreshing points you make in your book is that mankind underestimates its own intellectual capabilities in producing game-changing innovations in technology. Are you maybe putting too much faith in our abilities? Can we leave the security of energy up to chance?

Sure, you don't know the innovation or breakthrough until it happens, and there can be long lead times and then suddenly it takes over the world. Look at the Internet. It was started after the Cuban Missile Crisis but it didn't take over the world until after the Internet bubble. Innovation needs to be nurtured. It can come from left field. It could be the result of large organizations mobilizing resources. It can also be the result of a single obsessed individual who stays the course in the face of great derision, criticism and disappointment. But it's remarkable what's been achieved and how it shapes our every dimension. So, yes, there are risks, but there is also this capacity for human creativity and conviction.

You say that the right policies need to be in place to ensure investment and energy security. How much of a role do you think government should play in exploring and developing energy resources?

Government -- federal and state -- sets the regulatory environment. Another big role is supporting R&D and that's been a role the federal government has played since WWII. As a country we have benefited enormously from it.

One of the recurring themes of these stories you write about is repeated failure and risk before a venture is successful. Reports of such failures have been in the news of late, for example, the Solyndra affair and flammable drinking water in upstate New York and Pennsylvania due to fracking. Innovation, as you state, takes time, but there are real adverse effects on real lives in the process. Is it a fair burden to place on the average person just trying to provide for himself and his family?

I headed a task force on energy efficient development during the Clinton administration. One of the things about research and development is that it does involve failure, and a willingness and ability to tolerate failure. Even with all these breakthroughs, there were a lot of things that didn't work out and it took a long time. If we look at the renewables industry today, it started with great optimism in the '70s and '80s, and then crashed and went through what its survivors have called the "valley of death." Now, it's come back and it's a much bigger industry. But it is hard to know who the winners are. The ground keeps shifting.