When in doubt, add a swoosh, right? Please don\'t! Plus: Airline/culture crossover and \"Pan Am\" revisited 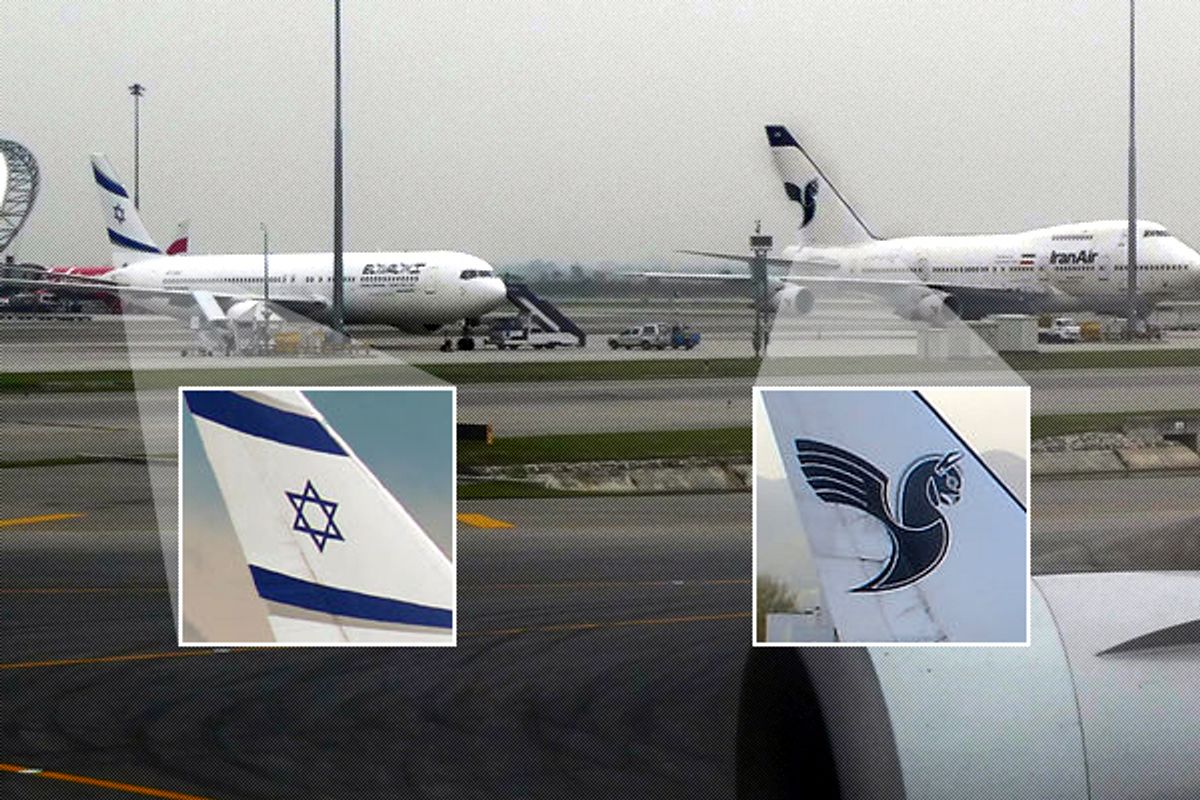 An El Al 767 and an Iran Air jet parked next to each other at an airport in Bangkok. (Patrick Smith/Salon)
--

Yes, I think it has. Presenting the new look of Malaysia Airlines.

Hey, wow, a swooshy thing. How original. It's two swooshes, actually, squashed and scribbled together like tandem shark fins in a peculiar and wholly unattractive pattern.

When I say "swooshy thing" I am talking specifically about the "Generic Meaningless Swoosh Thing" or GMST, the concept that, over the past 10 years or so, has become the lowest common denominator of airline brand identity, seen worldwide from Aeromexico to El Al. The term was coined by Amanda Collier, a graphic design veteran, quoted in one of this column's earlier livery discussions. Said Collier, "the GMST is what happens when any corporation gathers senior management, their internal creative department, and a design agency in order to develop a new logo. The managers will talk about wanting something that shows their company is 'forward thinking' and 'in motion,' and no fewer than three of them will reference Nike, inventors of the original Swoosh. The creative types smile, nod, secretly stab themselves with their X-Acto knives, and shit out variations on a motion theme until everyone gets tired of arguing about it."

What makes Malaysia Airlines' swoosh so tragic is that it supersedes one of the classiest palettes out there. Malaysia is, or was, one of the few carriers to retain a classic "cheat line" -- the horizontal, nose-to-tail striping once very common on jetliners. The blue and red cheat, tapered at the stern, was handsome, distinctive and dignified -- exactly what a livery should be.

The only thing that saves the revised look from total abomination is the retention of the indigenous Wau kite on the tail.  Few airline logos are as iconic and long-lasting.

True story: In 1993 I was in the city of Kota Bahru, a conservative Islamic town in northern Malaysia close to the Thai border, when we saw a group of little kids flying Wau kites. At the time I didn't realize where the airline's logo had come from, but I recognized the pattern immediately. It was one of those airline/culture crossover moments that we aerophiles get all emotional over.

Indonesian carrier Garuda, on the other hand, has taken a tragic step backward by removing a similarly iconic logo from its tails. Gone is the abstract head of the Garuda eagle. Borrowed from ancient Sanskrit, the Garuda is common to Buddhist and Hindu mythology, and one of Hinduism's animal-god trinity. This was seen as too meaningful, apparently, and the airline switched instead to this idiotic blue blur.

Here was another of my favorite airline/culture crossover moments -- or maybe airline/geopolitics is more accurate:

A few months ago I was excited to spot an Iran Air 747SP on the apron at Suvarnabhumi Airport in Bangkok. The SP, or "special performance," 747 was a short-bodied, long-range variant developed in the mid-1970s for Pan Am. Few were built, and today an SP is a rare sight. Only three or four remain in revenue airline service -- all at Iran Air.

But what really made the scene interesting is that parked directly next to the Iran Air jet was an El Al 767. There were Israel and Iran, all cozy together at a remote parking stand in BKK.

Is it crazy to wonder if maybe the airport hadn't devised this parking arrangement on purpose?

I wish you would have watched it. Somebody with a professional background needs to point out all the historical gaffes. How about Pan Am assigning a novice captain, at least 10 to 15 years too young, and with a shag haircut, to the inaugural NYC-Paris flight. Is there not a seniority system for pilots? This kind of indifference to "minor" historical detail -- like Civil War soldiers smoking filter cigarettes -- just reveals a lack of seriousness to the whole enterprise. Its success will depend on the ignorance of its audience.

I held my nose and watched the first episode along with my wife, who was a TWA "stewardess" for a short time. Having worked on the set of several aviation-related TV shows and motion pictures as a technical advisor, I knew I was going to be disappointed. Production companies rarely listen to TAs, even though they pay good money for us to be there.

The cockpit scenes are painful for anyone who has even a slight knowledge of aviation, especially an airline pilot from that era. The sad-looking Pan Am pilots look and act nothing remotely close to the real ones. A kid who looks like a student pilot is playing the role of 707 captain! Otherwise the inaccuracies are too many to mention. Not one scene came close to accurately portraying an actual 707, its crew or operation.

Author's note: It's exactly for reasons like these that I didn't watch the show, and that I similarly avoid almost all aviation-related shows and movies, and many documentaries as well. A junior captain assigned to the inaugural 707 to Paris? Not bloody likely. Chances are it would have been an old salt management captain (a chief pilot or whatnot). The whole crew, I'm sure, would have been high-profile. Incidentally, Pan Am launched the first-ever jet service between Idlewild (as JFK was known at the time) and Paris in October 1958. I thought the show was set in '63. If you're going to build your program around the name and legacy of an actual airline, at least be close with the facts.

Notwithstanding the low percentage of likelihood that there actually is an explosive in that bag, virtually every bomb squad's protocols begin with "DO NOT TOUCH OR MOVE ANYTHING" until the possible threat has been professionally evaluated. Your position, and that of many commenters, seems to accept that it's OK to jostle and poke at a possible bomb.

Author's note: I assumed this was the justification for stopping the line. But the bag has already been jostled and poked at all the way to the airport, up onto the belt, etc. You'd merely be moving it out of the way while somebody off to the side takes a look at the image. And let's face it, this is an incredible long shot over which to inconvenience millions of travelers daily. Get the bag out of there and keep the line moving.