It remains the most bizarre -- and potentially troubling -- episode from Christie's stint U.S. Attorney 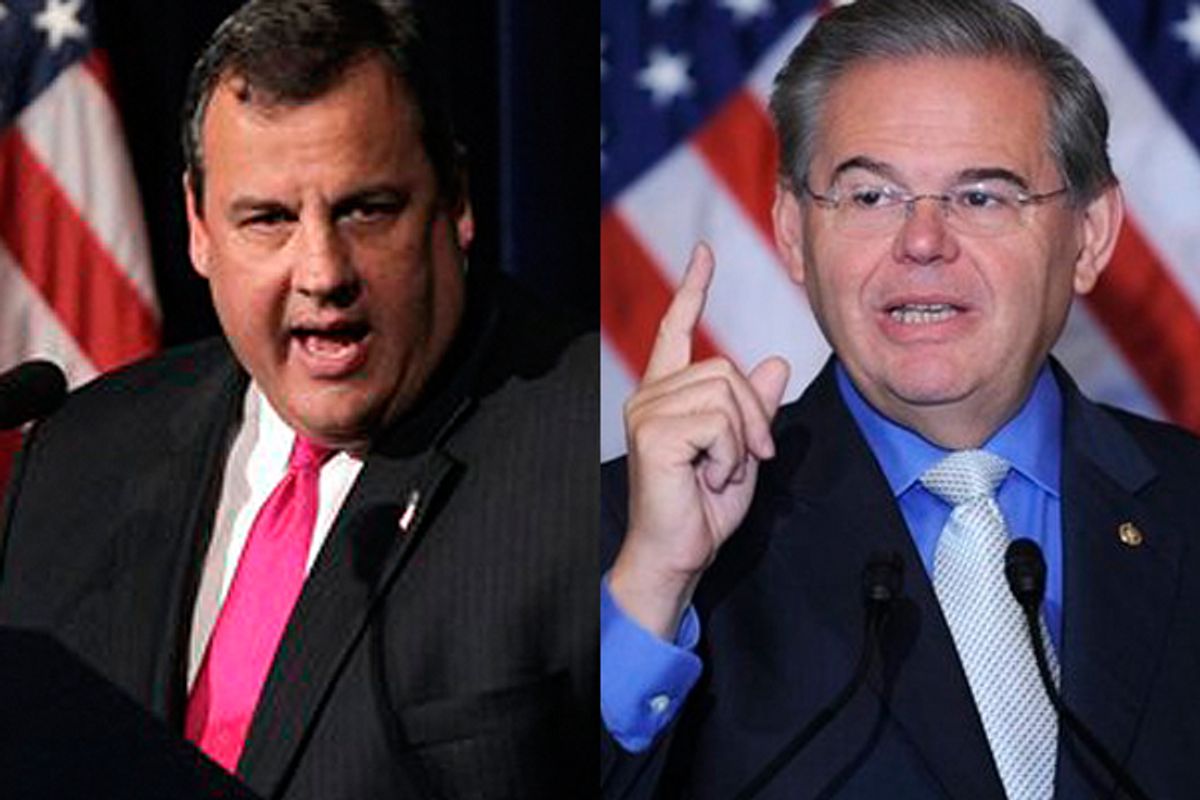 The New York Times has a piece today about the strained-to-hostile personal relationships that Chris Christie enjoys with New Jersey's two Democratic senators, Frank Lautenberg and Robert Menendez. As the story makes clear, Christie's friction with Lautenberg is pretty straight-forward, but when it comes to Menendez, the history is a little more complicated:

The enmity between Mr. Christie and Mr. Menendez dates at least to 2006, when Mr. Menendez was running for Senate and Mr. Christie was the top federal prosecutor in New Jersey. Mr. Christie’s office started an investigation that touched on Mr. Menendez’s dealings with a community group. Mr. Menendez charged that the inquiry was politically motivated — nothing came of it — and people close to the senator say he still resents it.

This is all true, but it's worth looking closer at what happened -- and what many Democrats strongly suspect may have happened -- back in 2006, because the episode is easily the most puzzling, and potentially troubling, of Christie's seven-year run as U.S. Attorney for New Jersey. At issue is the suggestion that Christie -- who used his position to attract glowing press coverage and to transform himself into his party's dream gubernatorial candidate -- responded to a threat from the Bush administration to fire him by ginning up a bogus, high-profile investigation of Menendez at a politically sensitive time.

The necessary context: In January 2006, Menendez was appointed to the U.S. Senate by Jon Corzine, who had resigned his Senate seat after being elected governor of New Jersey. There was only a year left on Corzine's term, so Menendez would have to stand for election that fall. Republicans, in New Jersey and nationally, smelled opportunity: Menendez was a product of Hudson County, a notorious haven for political corruption, where he had climbed through the political ranks, won a U.S. House seat, and emerged as the area's premier power-player. And corruption was a big issue in New Jersey in 2006, in the wake of the Torricelli and McGreevey sagas (McGreevey's was about a lot more than sex) -- and with Christie, the U.S. Attorney, waging a high-profile crusade against crooked politicians. Republicans, who recruited a candidate with a golden name (Tom Kean Jr.) into the Senate race, hoped the taint of Hudson County seediness would turn voters away from Menendez.

Nationally, the stakes were potentially enormous. In the wake of Katrina and with Iraq spiraling out of control, it was clear that the '06 midterms would be rough for the GOP, and that their control of the House and Senate was in peril. It was also clear that Menendez was the only vulnerable Democratic Senate incumbent up that year. Beating him became a Republican priority; flip the seat to their column and the Democrats would have virtually no chance of posting the net gain of six seats they needed nationally to win back the chamber.

As the fall arrived, polls showed Menendez and Kean locked in a tight race. Republicans hadn't won a Senate seat since in New Jersey since 1972, but now it looked like they had a real chance.  And that's when Christie entered the picture. On the night of Thursday, September 8 -- less than two months before the general election -- word leaked to the Star-Ledger and WNBC-TV that Menendez was under investigation by the U.S. Attorney's office and that records had been subpoenaed from a Hudson County nonprofit organization that received federal funds and that also rented space in a building owned by Menendez.

At first the news seemed like a devastating blow to Menendez's campaign. Just four years earlier, ethics problems had forced Torricelli to abandon his reelection campaign five weeks before Election Day, and talk immediately began that Menendez would be forced to do the same. Kean's campaign pounced, wasting no opportunity to remind voters that the guy whose ethics they had been questioning all year was now the subject of a federal criminal investigation. Menendez protested that it was a smear job, but his opponents quickly fired back that Christie's record on corruption as U.S. Attorney was unimpeachable -- he'd prosecuted polticians from both parties.

But Menendez had a point: It was different this time -- very different. Christie had made public corruption his marquee issue upon taking over as U.S. Attorney in 2001, and his first high-profile takedown had famously been a Republican: James Treffinger, the Essex County executive who had been on course to win the '02 GOP Senate nomination when Christie's team raided his office. Christie's won/loss record was impeccable: The politicians he went after all ended up being convicted or pleading guilty. Hence the suspicion that the news of a Menendez probe would quickly lead to more damning revelations and an indictment.

But it didn't. Instead, the story just sat there for the balance of the campaign, with no new developments -- no explanation of what exactly Menendez was suspected of doing wrong. The silence lent credence to Menendez's adamant insistence that he'd done nothing and that Christie, a politically ambitious Republican (it was widely known throughout the '00s that he planned to run for governor eventually), had essentially teamed up with his own party's U.S. Senate candidate. It was also noted that Christie, in apparently leaking word of the probe, had broken with the tradition of not dropping such bombshells so close to an election, lest it create suspicions of political motive. As David Chen explained in the New York Times that fall:

And in this instance, Mr. Christie’s focus on official corruption complements Mr. Kean’s strategy of hammering away at the notion that Mr. Menendez, a veteran of Hudson County’s bruising brand of politics, is ethically suspect.

“It seems to dovetail with the message that Tom Kean has put on consistently: that the Democrats are irrevocably corrupt and can’t be trusted,” said Mr. Baker of Rutgers. “It magnifies the lack of specific knowledge on the part of ordinary voters of the connections between two Democratic politicians, in very much the same way that Democrats nationally are building up a culture of corruption argument of lumping Abramoff, Ney and DeLay altogether.”

In the end, the GOP's "under federal investigation" talking point lost its teeth and Menendez, aided by the mighty anti-Bush tide and Kean's own deficiencies as a candidate, won by nine points. And that's pretty much the last we heard about a federal investigation of Menendez.

But then, a few months later, came a startling new wrinkle. In early 2007, the Bush Justice Department came under scrutiny for the way it handled U.S. attorneys. Revelations emerged that prosecutors around the country had been ranked according to their loyalty to the administration and its goals and that a surprisingly high number had been purged, or at least placed on to-be-fired lists. The controversy grew out of DOJ's firing of seven prosecutors on the same day in December 2006. The New Jersey angle: It turned out that twice in 2006, Christie had appeared on informal lists of targeted prosecutors, but that his name had been scrubbed just before the firings were announced in December.

This created immediate suspicion. The U.S. Attorney's job had literally made Christie's political career. He'd been appointed to it after serving as an elite Bush fund-raiser in 2000, and before that his own political career had been in ruins. But his aggressive pursuit of political corruption put him in the headlines and on television the most enviable way -- the fearless, corruption-busting prosecutor standing up for honest citizens everywhere. In 1997, he'd been defeated in a Republican primary for county office in suburban Morris County. By 2006, he was the state GOP's dream candidate for major office. In other words, the U.S. Attorney's job had been very good to him, and with the next governor's race still three years away, he needed to hold on to it to keep the favorable headlines coming. Had Christie been aware that he was on the to-be-fired list in early 2006? And had his weird, out-of-character pursuit of Menendez -- the national GOP's top Senate target -- been his way of proving his loyalty and saving his job?

Christie has always denied this, and asserted that he didn't know he was on any list until after the December firings were announced. He's also said that he has no idea why he would have been on the list in the first place. It may be that it was all a coincidence, his simultaneous inclusion on the firing list and decision to pursue Menendez. But the fact remains that the very public, very futile Menendez investigation stands as a glaring exception to the way Christie typically handled business as U.S. Attorney -- and that holding on to his job was crucial to his eventual election as governor in 2009, and to his current status as a presidential prospect.