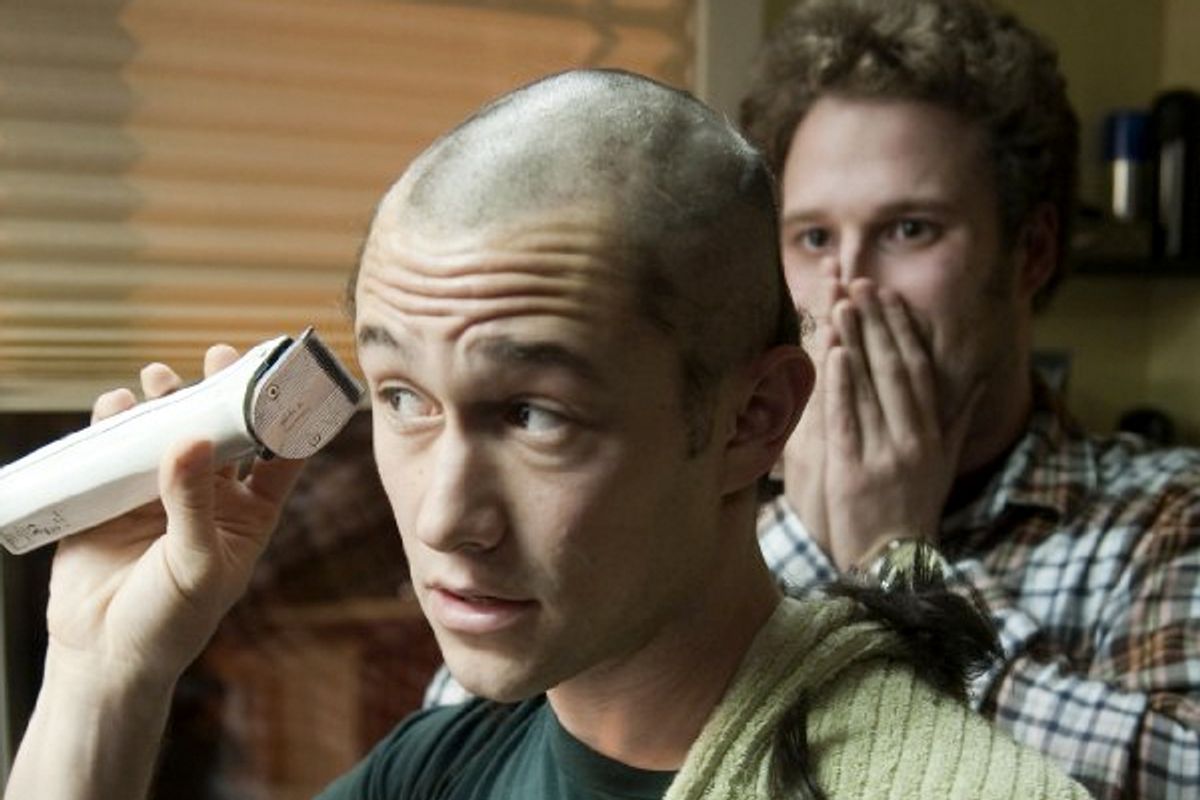 You measure your success in five-year increments. Your doctors let you know if your blood counts are high or low. You bite your lip, not sure if you want to know if you're stage 1, 2, 3 or 4. Cancer -- it's a numbers game. So when I went to Sloan-Kettering last week to discuss a drug that's effective in 30 percent of patients for my melanoma that has a roughly 10-20 percent survival rate , it didn't come as much of a surprise when my doctor said, noting proudly that I've lasted almost 14 months already, "The odds have been against you from the start."

It's clear right from the title that the poignant, funny and profane "50/50" understands the woozy terror of a life or death crisis. Why then is it being peddled as "the comedy from the guys who brought you 'Superbad'?" What's so funny about cancer? Believe it or not, quite a lot.

Joseph Gordon-Levitt is Adam, a tightly wound NPR drone who rhapsodies about Swiffers and refuses to jaywalk even when there isn't a car in sight. His best friend Kyle, played by Seth Rogen, is a guy whose interests include getting high and talking about blow jobs in the latte line. So what happens to these two kooky fellas when 27-year-old Adam discovers he has a rare form of spinal cancer and just a 50 percent chance at survival?

What ensues is "Beaches" meets "Pineapple Express." Which, I've got to tell you, is pretty much what living with cancer is like. The movie has good reason to resonate so truthfully -- it was written by television producer Will Reiser, who himself endured cancer in his mid-20s. Rogen was there for it all. No wonder the movie has such a brutal, honest sting.

Thrust into a world of procedures, treatments, WebMDing, and doctors who say everything much too fast -- all while his friends are blithely bar-hopping -- Adam must quickly adjust to his strange and frightening new status. Co-workers give unsolicited advice and tearful hugs, his mother (a steely Angelica Houston) flies into drama queen mode, and his girlfriend suddenly keeps him at arm's length. Kyle, meanwhile, angles the situation into opportunities to smoke dope and get laid.

Gordon-Levitt, combining his "(500) Days of Summer" angst with "Inception" efficiency, does a terrific job of capturing the emotional gamut that is illness. Adam, a control freak in an out-of-control situation, pings between panic and wry amusement at the absurdity of his situation, the humbling awfulness of it all. But the movie's biggest surprise is the usually one-note Rogen, who manages to be both glib and genuinely vulnerable.

Where "50/50"breaks ground, however, is its understanding that neither illness nor friendship is some pink-ribboned chick thing. This is a film self-aware enough to crack a "Terms of Endearment" joke, to compare its chemo-bald leading man to both Lord Voldemort and Michael Stipe, and to understand that surgical wound care is an awful lot like one of the "Saw" flicks. In other words, dudes, you don't even have to have cancer to appreciate its vulgar, vulgar heart.

Unsurprisingly, Rogen and company, like true students of the Judd Apatow school of filmmaking, never quite get a grip on their female characters. Anna Kendrick is Adam's much too young and inexperienced therapist -- a girl who serves more as crush object than a real character. And Bryce Dallas Howard, rapidly on her way to becoming Hollywood's go-to ice bitch, plays Adam's artist girlfriend Rachel as a hateful little bundle of narcissism.

Rachel does provide one of the film's most insightful moments. As Adam heads into the hospital for his first chemo session, she opts to sit in the car, explaining that she can't go into "that world." Cancer is indeed a different world. And what "50/50" shows, with great and bittersweet clarity, is that not everyone will be able or willing to go into that world with you.

Rachel's refusal to mix "the negative with the positive" is at once a stone cold dis and a perfectly logical reaction. Who, after all, would choose to spend time in a cancer ward? Who would consider sickness anything but a negative? But what "50/50" gets -- that poor Rachel doesn't -- is that moments of the greatest joy and connection and unadulterated freedom coexist with the horror and terror and pain. That love and silliness can get you through just about everything. As a woman whose friends have showered her with cakes festooned in expletives and T-shirts bearing the image of Monty Python's indomitable Black Knight, I can testify that the real Big C -- just like "50/50" -- is both a three-hanky weeper and a total farce. And that although every day of life is a gamble, every day is also, amazingly, a gift.