The truth about voter suppression 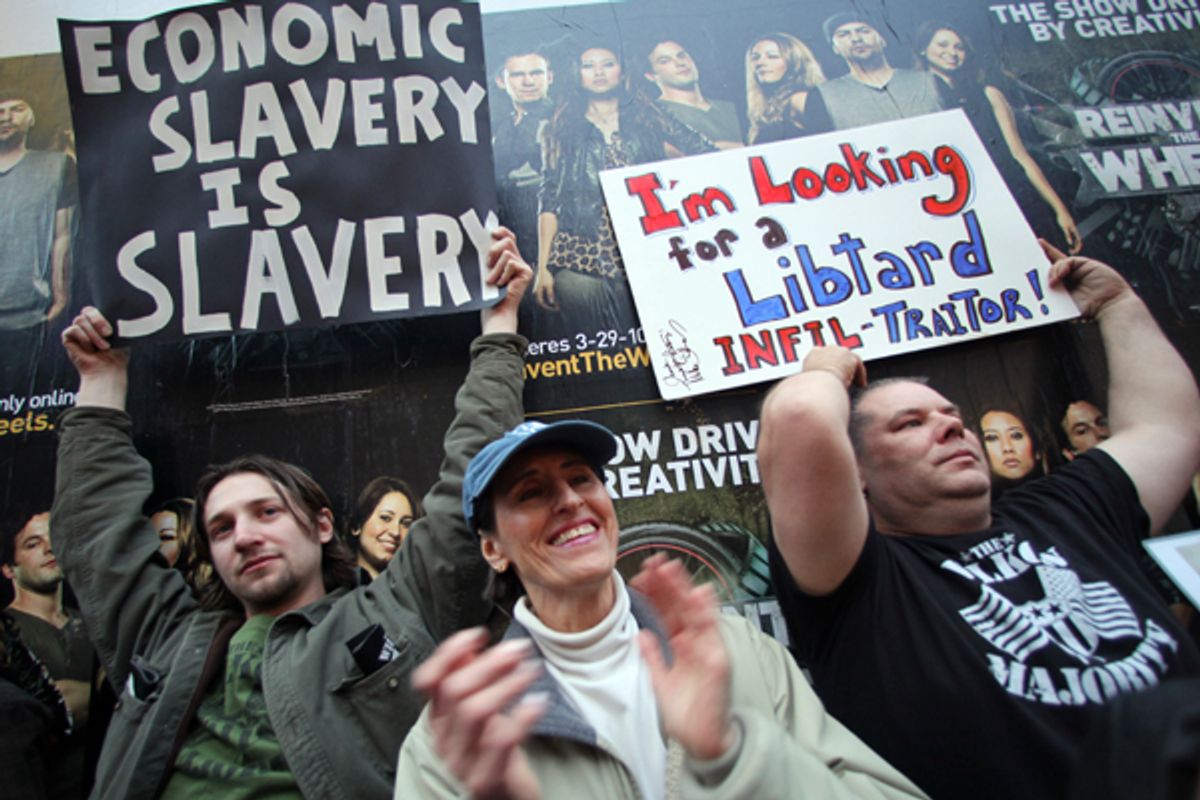 The national trauma of the 2000 presidential election and its messy denouement in Florida and the U.S. Supreme Court made, for a brief moment, election reform a cause célèbre. The scrutiny of election administration went far beyond the vote counting and recounting that dominated headlines. The Florida saga cast a harsh light on the whole country's archaic and fragmented system of election administration, exemplified by a state where hundreds of thousands of citizens were disenfranchised by incompetent and malicious voter purges, Reconstruction-era felon voting bans, improper record-keeping, and deliberate deception and harassment.

The outrage generated by the revelations of 2000 soon spent itself or was channeled into other avenues, producing, as a sort of consolation prize, the Help America Vote Act (HAVA) of 2002, an underambitious and underfunded law mainly aimed at preventing partisan mischief in vote counting. The fundamental problem of accepting 50 different systems for election administration, complicated even more in states like Florida where local election officials control most decisions with minimal federal, state or judicial oversight, was barely touched by HAVA. As Judith Browne-Dianis, of the civil rights group the Advancement Project, told me: "The same cracks in the system have persisted."

But most politicians in both parties paid lip service to the idea that every American citizen had a right to vote, and that higher voting levels of the sort taken for granted in most democracies would be a good thing. "Convenience voting" via mail and early on-site balloting, or simply liberalized "absentee" voting, spread rapidly throughout the last decade, often as a way to minimize Election Day confusion or chicanery. In Florida itself, Republican Govs. Jeb Bush and Charlie Crist relaxed and then abolished the state's practice of disenfranchising nonviolent felons for a period of time after their release.

No more. In the wake of the 2010 elections, Republican governors and legislatures are engaging in a wave of restrictive voting legislation unlike anything this country has seen since the Voting Rights Act of 1965, which signaled the defeat of the South's long effort to prevent universal suffrage. This wave of activism is too universal to be a coincidence, and too broad to reflect anything other than a general determination to restrict the franchise.

Millions of voters are affected. In Florida new Republican Gov. Rick Scott signed legislation reversing Crist's order automatically restoring the voting rights of nonviolent ex-felons. In one fell swoop, Scott extinguished the right to vote for 97,000 Florida citizens and placed more than a million others in danger of disenfranchisement. In a close contest for the Sunshine State's 29 electoral votes, such measures could be as crucial to the outcome as the various vote suppression efforts of 2000.

As Ari Berman explained in an excellent recent summary of these developments for Rolling Stone, restrictive legislation, which has been introduced in 38 states and enacted (so far) in at least 12, can be divided into four main categories: restrictions on voter registration drives by nonpartisan, nonprofit civic and advocacy groups; cutbacks in early voting opportunities; new, burdensome identification requirements for voting; and reinstitution of bans on voting by ex-felons.

While new voter ID laws have clearly been coordinated by the powerful conservative state legislative lobbying network ALEC (American Legislative Exchange Council), other initiatives have spread almost virally. Virtually all of these restrictions demonstrably target segments of the electorate -- the very poor, African-Americans and Hispanics, college students, and organizations trying to register all of the above -- that tend to vote for Democrats.

Virtually all have been justified by their sponsors as measures to prevent "voter fraud," a phenomenon for which there is remarkably little evidence anywhere in the country. As Tovah Andrea Wang, an election law expert at Demos, has concluded: "[L]aw enforcement statistics, reports from elections officials and widespread research have proved that voter fraud at the polling place is virtually nonexistent." The Bush administration's Justice Department tried to a scandalous degree to find cases of voter fraud to prosecute, and failed.

But as Marge Baker, executive vice president of People for the American Way, observes:

So-called anti-fraud laws are almost always thinly veiled attempts to prevent large segments of the population from making it to the ballot box ... low-income voters, college students, people of color, the elderly. The people behind these laws know that there is no "voter fraud" epidemic. They just want to make it as difficult as possible for certain types of people to vote.

If so, is the motivation simply and purely partisanship? That's the conclusion reached by former President Bill Clinton, who told a Campus Progress audience in July: "They are trying to make the 2012 electorate look more like the 2010 electorate than the 2008 electorate."

The prevalence of restrictive measures in key 2012 swing states certainly reinforces this impression. With Scott's order Florida rolled back the early voting that played a key role in Obama's 2008 victory. New voter ID laws were pioneered in Indiana, the red state most famously carried by Obama in 2008. A voter ID bill passed in the Legislature in North Carolina, but was vetoed by the governor, a Democrat.

Cynical as such actions may seem, they do reflect an ideology. For some conservatives, however, there is a deeper motive than partisanship that helps explain the rapid proliferation of restrictive legislation. It hearkens back to much older debates over the franchise that raged from the mid-19th to the mid-20th centuries: the belief that voting is a "privilege" rather than a right, and one best exercised by "responsible" or "productive" members of the community. And it's not really surprising that old-school doubts about the very concept of "voting rights" have accompanied the dramatic rise to power of "constitutional conservatives" who strongly believe that no popular majority should have the power to modify fixed concepts of property rights and limited government as handed down by the Founders, who themselves acted (according to many Tea Partyers) according to a divine mandate.

You hear echoes of this ancient anti-democratic conviction scattered all across the Tea Party Movement and among many state legislators active in voting for restriction legislation. Tea Party Nation president Judson Phillips created a furor in November of 2010 by suggesting that voting should be restricted to property owners, as it often was prior to enactment of the 15th Amendment.

Minnesota House Speaker Kurt Zellers flatly claimed voting was "not a right" during debate over a photo ID bill (a statement he later partially walked back). So, too, did Florida state Sen. Mike Bennett in a similar debate. Republican legislators and party leaders in Wisconsin, Maine and New Hampshire said all sorts of disparaging things about the civic qualifications of college students in the process of seeking to keep them from voting on campus.

Suffusing much of this sentiment is the pervasive Tea Party fear that voters without "skin in the game," that is, "property ownership or significant tax liability," will be prone to voting for big government and "welfare" at the expense of "productive" citizens. Few would publicly go so far as right-wing author Matthew Vadim, who briefly became a Fox celebrity for his argument that registering poor people to vote is "like handing out burglary tools to criminals," since they "can be counted on to vote themselves more benefits by electing redistributionist politicians."

But throughout the conservative and Tea Party subculture you find countless people who subscribe to the "Cloward-Piven Strategy" (popularized by Glenn Beck) that liberals have been engaged in a deliberate effort for decades to buy votes with expanded welfare benefits. And from practically the moment the financial crisis exploded, a preferred conservative-activist interpretation (advanced most aggressively by presidential candidate Michele Bachmann) has involved an elaborate variation on the Cloward-Piven Strategy.

The story is that the obscure community organizing group ACORN utilized the provisions of the Community Reinvestment Act to destroy the housing and banking industries with mortgages for shiftless poor and minority borrowers who were then encouraged to elect "socialist" politicians like Barack Obama to bail them out. This particular conspiracy theory has been especially potent since ACORN's often-clumsy voter registration efforts also happen to be at the very center of Republican claims of widespread voter fraud.

Conservative suspicions that letting poor people vote leads to "socialism" have been most evident in the strange furor among tax-hating Republicans about the number of Americans who do not have net federal income tax liability. These "lucky duckies" (as the Wall Street Journal famously called them in a 2002 Op-Ed deploring the low taxes paid by the poor) have no "skin in the game." Thus, as the Journal put it, "can hardly be expected to care about tax relief for everybody else ... [and] are also that much more detached from recognizing the costs of government."

While it's unlikely Republican politicians will come right out and advocate higher taxes on the poor (although some "fair tax" schemes calling for a shift to consumption taxes would have the same effect), the resentment of them as freeloaders who get to "vote themselves welfare" probably does operate as a fine rationalization for placing landmines on their path to the voting booth.

All in all, the conservative commitment to full voting rights, which used to be a bipartisan totem that Republican operatives undermined in the dark and out of sight, is probably dead for the foreseeable future. And the war on voting will continue.