Moving in on Boston

Between two financial giants, a green space occupied by a thousand voices. 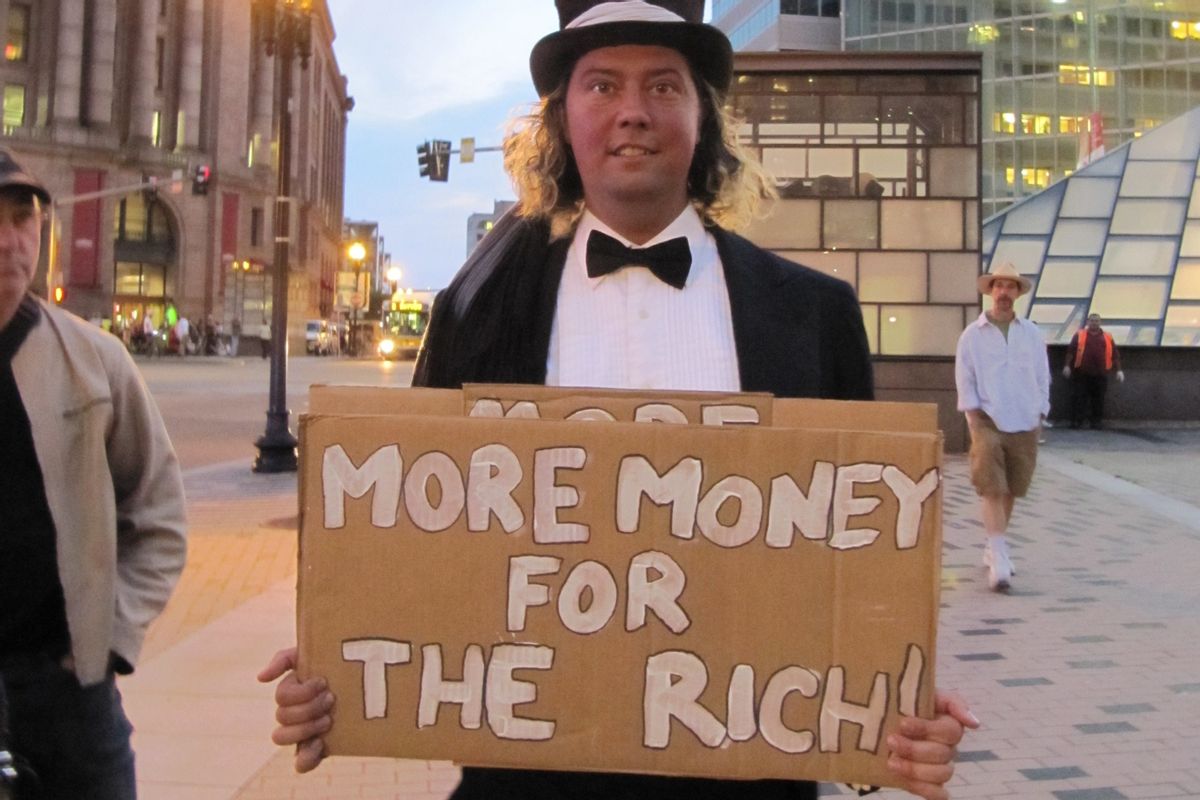 Unlike groups in other cities like Chicago, which failed to attract more than a couple of dozen protesters, the organizers behind Occupy Boston displayed an impressive organizational savvy that suggests their occupation might have staying power.

Formed on Facebook and on Twitter (@occupyboston), the protesters gathered themselves swiftly, holding their first public meeting within three days of the arrest of 80 protesters in clashes with the New York City Police Department last Saturday in Lower Manhattan.

Boasting no leaders, just liaisons, the group first gathered Wednesday in the Boston Common and made the move on Friday down to Dewey Square on the south edge of the Rose Kennedy Greenway, just outside of South Station, toting tents and tarps and musical instruments and riding hundreds of bicycles. Behind them was the black granite edifice of the Bank of America. In front of them: their target, the Federal Reserve Bank of Boston, a glittering aluminum tower that stood tall against the night sky.

The group halted on the grass lawn opposite the Fed building. What started out as a fledgling swarm of rabble-rousing activists had morphed into a finely tuned organizational machine dividing itself into subgroups concerned with the logistics of food, shelter, security, bathrooms and media.

The festive spirit of Friday evening, which featured a marching band and colorful makeshift signs, shifted after sunset when clumps of tents equipped with laptops, camera equipment and generators went up. The occupiers insisted they were here to stay -- to get the government's attention.

As in New York, this was a gathering and a mood with a message. Occupy Boston has issued no specific list of demands, apart from positive change pertaining to the financial system. One protester carried a sign that simply said "Tax Financial Products."

The organizers, schooled in nonviolent tactics, were in constant communication with the police and relations with the police seem untroubled. One cop I talked to was sympathetic: "Hey, I'm one of the 99 percent."

Reasons for joining the Occupy Boston protest ranged widely: I heard a populist dissatisfaction with economic inequality and a lack of corporate accountability as well as a Utopian desire to abolish money altogether.

Brandon Wood, a 20-year-old Boston University philosophy student, said he was inspired by Occupy Wall Street to make the trek to New York by bus. "It was an unreal experience with all sorts of people from all different backgrounds all finding their problems rooted in Wall Street."

"I'm 100 percent against printing money and corporations controlling our economy," said Bill Desmond, a 59-year-old father of four who sorts mail for a living in the Boston suburb of Weymouth.

Social media matters. Most of those there said they heard about the New York protesters on Facebook or Twitter and came to show solidarity with the protesters now camped in Zuccotti Park, two blocks off Wall Street.

Elyse Clifford, a 2009 college graduate, described Wall Street greed as an issue that has large convergence.

"Everyone needs to take note of it, unless they're in the top 1 percent," she said. "We need to learn from 2008, but we can't because Wall Street owns Washington."

Another protester, full of passionate intensity, held that the financial meltdown of 2008 and all its unfortunate consequences could be traced right to the Federal Reserve. From behind a face scarf he argued his belief that the Illuminati and the Freemasons control the world's money supply.

Another woman, carrying a "Bailout the 99%" sign, cursed the bankers and said the “monstrously rich should pay their fair share."

"Three years later and no one's been punished," she said. "So I was motivated as a last resort."

The Occupy Boston members, advised by lawyers and members of the ACLU, voted Wednesday night to forgo the permitting process to occupy Dewey Square. The debate went on for hours, according to Acacia Brewer, of the media team. “The word is that Boston cops would allow the tents, but we're using them at our own risk.”

So far the city of Boston has allowed them to stay.

“We've covered all our bases,” Brewer said. “They know we don't want to stumble on anyone's toes.”

Boston Police spokeswoman Elaine Driscoll said, "The city is developing a deployment plan with a goal of respecting everyone's right to protest but also ensuring the public's safety.”

Nancy Murray, director of education at the American Civil Liberties Union, circulated advice cards for anyone stopped by police or arrested. "The ACLU is really concerned that people know their rights to protest," she said.

"We're coached on how to be polite and how not to swear so as not to provoke a beating," said one man named Chris who refused to use his last name. "I don't like it being out there online," he explained.

The organization put out a statement complaining that "the top 1 percent owns 50 percent of the nation's wealth and, more importantly, how that wealth is used undermines the founding principles of America's democracy." In the founding city of American democracy that message was poignant and pointed.

In the coming weeks the group plans to reach out to policymakers and business leaders to advocate for positive change through the use of a more direct democracy. The statement said they plan to "define and solve problems of an opaque and exclusive government, a Wall Street without conscience, and a state struggling to guarantee basic rights."

At evening's end I asked three people how big they thought the crowd was. All three said "about a thousand." They were huddled in perhaps 20 different circles of conversation. They talked into the night in the pitched tents on the green between the Fed and the Bank of America. The rain clouds that would burst in the small hours of Saturday morning were already gathering.