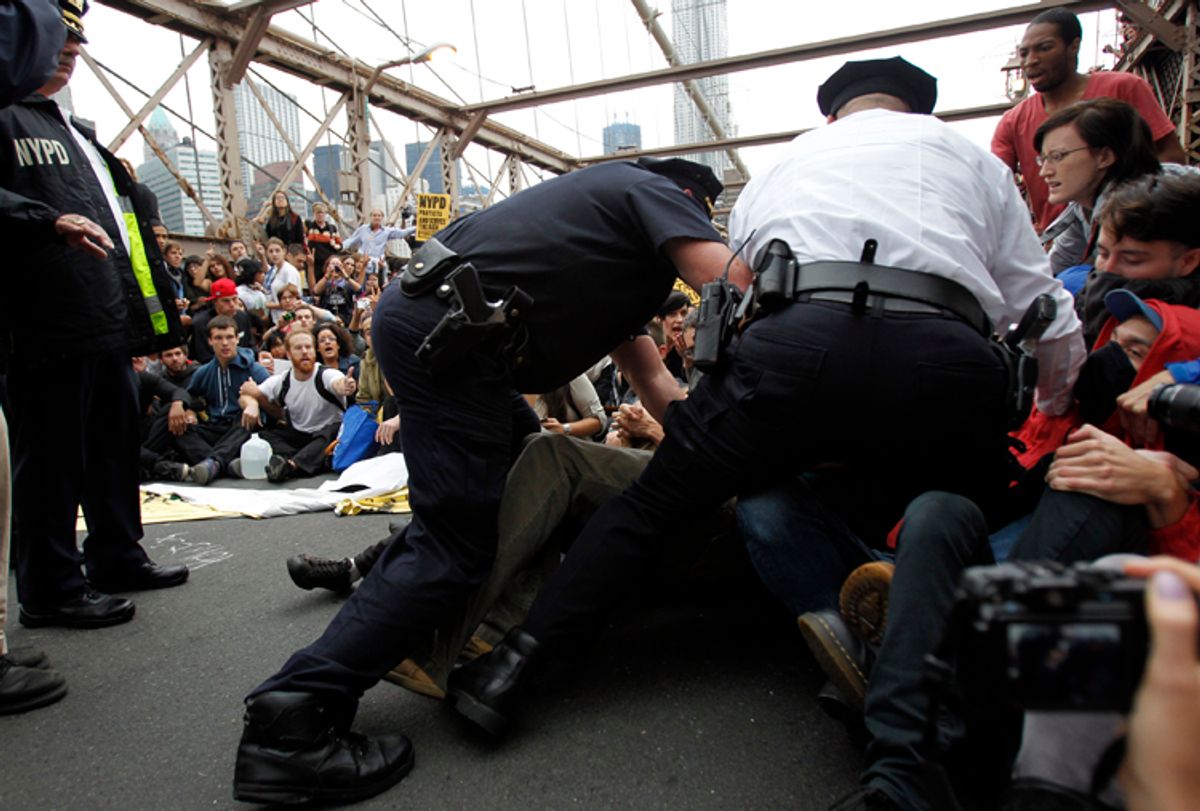 A large march by Occupy Wall Street protesters Saturday ended partway across the Brooklyn Bridge with the NYPD intervening and arresting hundreds of demonstrators.

I was with the marchers -- an estimated few thousand people -- as they made their way north from Zuccoti Park just off Wall Street toward City Hall and the bridge, chanting, "We got sold out, banks got bailed out!" Some in attendance reported it was the biggest crowd yet at the protest, which began Sept. 17 and has  begun to spread to other cities. (See Salon's report on the Boston edition here.)

Before the march started, one protest organizer told me, "If the cops arrest 100 people, it's the best thing they could do for us." Indeed, media and public interest in the protest swelled after an NYPD officer pepper-sprayed several protesters last Saturday.

So with the arrests today, the NYPD may have handed the protesters a public-relations gift. Media interest is already high; as with my visit on Wednesday, I saw at least a couple dozen camera crews, reporters and photographers.

Before the showdown on the Brooklyn Bridge, the protesters moved along sidewalks amid a large police presence that was focused on keeping street traffic moving. For reasons that are not yet clear, the police decided to allow some of the large mass of people to get onto the bridge and partway across before blocking their path and beginning to make arrests.

There is still no detailed Occupy Wall Street agenda -- the debate over what it should be continues -- but one new feature of the protest Saturday was a slick in-house newspaper, the Occupied Wall Street Journal (click for full size):

Copies were being handed out in great numbers among the protesters as well as to interested onlookers and passersby, in effect the first semi-official flier of the protest.

The lead story, "The revolution begins at home: Wall Street protests enter third week," is nothing if not bold:

What is occurring on Wall Street right now is remarkable. For over two weeks, in the great cathedral of capitalism, the dispossessed have liberated territory from the financial overlords and their police army.

They have created a unique opportunity to peacefully shift the tides of history like the sit-down strikes of the 1930s, the civil rights movement of the 1960s and the democratic uprisings across the Arab world and Europe today.

The four-page paper also includes a timeline that places Occupy Wall Street in the direct lineage of the Arab Spring uprisings as well as the mass demonstrations in Wisconsin against Gov. Scott Walker's scheme to gut collective bargaining rights.

The paper published this official declaration of Occupy Wall Street adopted by the protesters by vote on Sept. 29. It does not outline goals but rather lists grievances and issues a broad call to action.

The paper also includes a list of "five things you can do right now," namely:

--"Donate" either money or food or clothes

There is also a rumbling of support for the protesters from organized labor, with Transport Workers Union Local 100 issuing a statement of support and 1199 SEIU providing some supplies.

I didn’t see much visible union presence at the march Saturday, but there were lots of ponchos donated by 1199 SEIU. Those two unions and several others are reportedly focusing on a large march in solidarity with Occupied Wall Street planned for this Wednesday, Oct. 5. So stay tuned.