She's just not that into dating 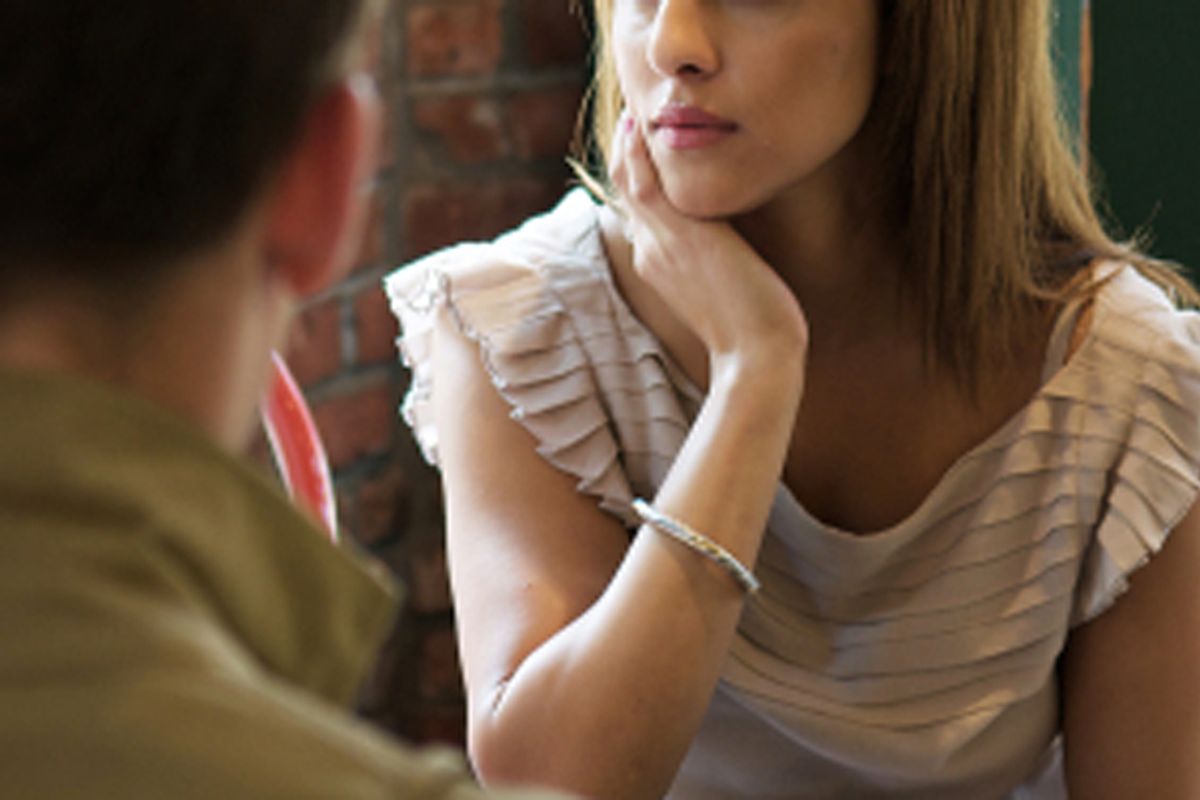 After a particularly bad breakup, 32-year-old Samhita Mukhopadhyay found herself in the relationship advice section of her local bookstore. There were eight whole shelves of relevant titles but one common theme began to emerge: Feminism was being blamed for ruining romance.

Mukhopadhyay, executive editor of the popular activist blog Feministing.com, decided to break through the din -- that's how her new book, "Outdated: Why Dating is Ruining Your Love Life," came about. She saw "an industry unchecked, overflowing with pages and pages of advice claiming to hold the secrets to your love life, implicitly -- and often explicitly -- linking a woman's very identity with her romantic status, equating her romantic success with her success as a woman," she writes in the book's introduction. "Outdated" is a critique of books like Lori Gottlieb's "Marry Him: The Case for Settling for Mr. Good Enough," which blames feminism for teaching women to strive too high in their pursuit of a good man, and arguments like those made by sociologist Mark Regnerus about how women's greater freedom has ultimately resulted in fewer romantic choices.

But it also attempts to offer guidance on how "savvy, smart, successful, politically conscious women date and find love, on our own terms in a world that is still defined by traditional gender roles, impossible expectations, and archaic relationship models." This isn't easily done -- even in theory, let alone practice. Mukhopadhyay is transparent about the challenges of making the political so very personal, but she's also tirelessly optimistic about the potential for change. She isn't so much a hopeless romantic as a romantically hopeful feminist. It isn't a book to turn to for tough love or strident directives -- it's more of a "Chicken Soup for the Single Straight Feminist Soul," which is just the sort of book that she was originally looking for and couldn't find.

I spoke with Mukhopadhyay by phone about the challenges of dating while feminist, her advice for women tempted by popular dating books and why the recession has been especially hard on single men.

So, you argue that feminism hasn't destroyed romance. Has feminist helped romance at all?

Throughout the book I talk about all these different types of feminism -- what has helped and what hasn't helped. On a general level, women who have embraced any parts of feminism tend to maybe have higher self-esteem because they have a stronger sense of what they're looking for and believe that they have the right to look for it. That fact alone makes you better prepared in life, and definitely in romance.

Is there even a small grain of truth to the argument that feminism has hurt our love lives?

The truth of that argument is that feminism has hurt this really archaic notion of romance. The way that romance was traditionally structured relied on male dominance and breadwinning, the guy as the masculine figure who asks you out, pays for the date and makes the first move. It's not just feminism, though -- all sorts of cultural and economic shifts have happened so that we don't actually live in a culture where you can have one breadwinner anymore. This friction has come up between the reality of how we're living our lives and the romantic story that hinges on gender relationships that don't exist anymore.

What are some of the challenges of dating while feminist?

I think for the average independent, feminist-minded woman, one of the biggest difficulties is wanting to be in a romantic relationship but feeling like there aren't appropriate avenues that don't feed into this larger mythology about romance. A lot of contradictions show up: I don't think that getting married is a blatant contradiction to feminism, but it is one of those complicated grey areas. There's no absolute feminist space that any of us are going to be able to live in. It's this set of ideologies that we hope are going to be reflected in the way that we live our lives.

Feminists have been such a strong presence in the fight for marriage equality. One thing that seems to be missing is the feminist argument against marriage and the social and cultural primacy that we give it. Why aren't we debating the more radical alternatives?

Well, because of external pressure against gay marriage, I think a lot of the messaging has been pushed to look as vanilla as possible. So, it's literally like, "We're fighting for our right to also register at Crate and Barrel." It's become this unanimously understood progressive issue that if you're against it you're this horrible person. The fight has become so mainstream. That has had the effect of truly silencing what I call the "single, bitter 30-something woman" who doesn't want to get married. Who's fighting for her rights, or for queer communities that don't want to get married? It's a frustration that happens in all social movements -- the messages that become the most popular are the most socially acceptable.

Is there a next step where we're going to see the conversation brought to that next level where we're talking about ways to support people who don't choose marriage?

Yeah, right, just like how after the civil rights movement we have these really complex conversations about race in the media? [Laughs.] Just kidding. I think it'll be interesting to see what happens in the next decade. This has been a tremendous gain for our generation and for the LGBT community to have made so much legislative progress. I wonder, is the result going to be the attitude that because now that everyone can get married everyone should get married? Or, because we've recognized that marriage is not just between a man and his wife, does that leave space for even more alternative lifestyles? The big question mark for me is the role of corporate advertising around weddings and the wedding industrial complex and the role that really plays in what young people want in romance.

In the book, you talk about how feminists often feel this pressure to not be "the needy girl," to be laid back and not care if a guy doesn't call, that sort of thing. How do you find a balance between demanding what you want and also not being that "needy girl"?

I think it's a matter of recognizing that as a woman when you have needs and ask for them you get put into this sexist stereotype. Part of how you fight sexist stereotypes yourself is having healthy self-esteem, and recognizing what you're looking for and when your partner does not meet your needs. A lot of these conflicts come up when women feel like their very identity is based on male approval, and that's one of the ways that feminism is most helpful. The "needy girl," if she actually exists, has been taught that her very identity was based on male approval. Recognizing that takes work, it's constant maintenance.

Are you optimistic about the possibilities for change?

I am optimistic about it. I think women are negotiating all of these issues, and that has a really positive impact overall. The more women and men disavow these really traditional ideas about romance, the more people around them will. I'm really excited about the conversations that young people are having about monogamy and marriage. We're going to move to a place where people are more comfortable seeking the relationships they want.

What about men? What pressures are they facing right now?

I think the pressure to be a playboy is still there. There's the whole panic around hookup culture, but no one talks about how it supports this really specific type of masculinity where having multiple sexual partners makes you a man. These books tell you that's what men are like -- that they're so simple, they just want to have sex and they want to have food and they want you to not talk to them while they're watching baseball. I mean, how many guys do you know who are actually like that, right? [Laughs.] It's so simplistic.

Also, a lot of people don’t have jobs right now, so the pressure to have to pay for a date or be in place where you feel confident enough to ask someone out, that's an unfair pressure that is put on men.

I have some female friends in their early to mid-thirties -- all feminists, successful, kick-ass -- but they're single and feeling the biological clock ticking, and similar cliches. A lot of them are tempted to say, "Maybe I made a mistake by focusing on my career." What would you say to women like that?

To have faith, I guess? I mean, it makes me so sad that women do feel like that. But I think it's a really legitimate grievance to be like, "I did it all, and now here I am and it didn't work out and now I'm sad." One of the things I think about is, "What would my life have been if I'd stayed with my boyfriend from when I was 25?" And that scares me. I'm so glad I didn't do that. Having faith in yourself and knowing that you made the right decisions for yourself and knowing where it brought you and knowing that what used to be too late is not too late anymore.

People say your 20s are confusing, I think your 30s are confusing too. You look at all your friends getting married around you and you think, "What if that just doesn't happen for me?" And that's a really scary prospect, but guess what? A lot of your friends might get divorced and they'll be in their 40s and they're gonna be asking the same questions. One of the things I tell myself is that I don't want to look back at my time as a single person and regret that I spent a lot of it sad about the relationships that didn't work out. I really want to enjoy this time in my life because it actually might not go on forever.