Her trial made Italian justice look cartoonish -- but she should be glad her appeal wasn't heard in the U.S. 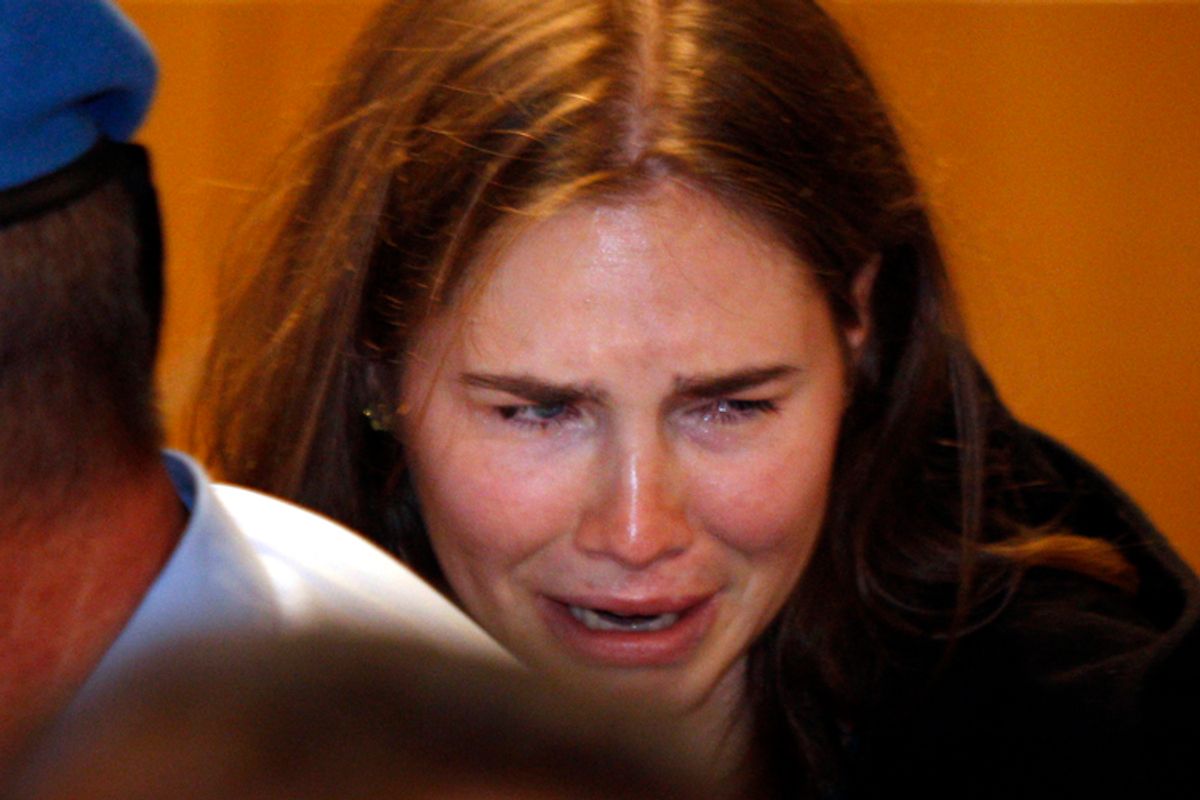 Amanda Knox breaks in tears after hearing the verdict that overturns her conviction and acquits her of murdering her British roommate Meredith Kercher, Monday, Oct. 3, 2011. (AP/Pier Paolo Cito)
--

Amanda Knox is free and the Italian judicial system has proved that its contorted scheme of checks and balances has a profound underlying logic after all.

Much of the anger and bafflement expressed by Knox’s supporters throughout this four-year carnival has been directed at the Italian court: its fervid passion for vacations and postponements; its clownish atmosphere, in which lawyers and defendants shout over each other and wring their hands as in a Pietro Germi comedy; and the fact that jurors are not sequestered, so that the court of public opinion often appears to be the highest court in the land.

But one of the central ironies of this case -- and the case had a gluttony of ironies -- is that Amanda Knox was extremely fortunate to be tried in the Italian system. Amanda Knox was well aware of this. In Italy, a "life" sentence carries a maximum of 30 years, with time off for good behavior. If Knox had been convicted of murder in her home state, Washington, she would have been on Death Row. In Washington, prisoners sentenced to the death penalty must choose whether they would like to be killed by lethal injection or by hanging. (Washington is the only state that still allows prisoners to be hung.)

Knox’s odds of winning an appeal would also have been dramatically slimmer. While the initial jury trial in Italy resembles an inquisition -- the prosecutor assuming the scolding tone of a disappointed Catholic priest -- the appeal tilts heavily toward the convicted. In the United States, an appeal can only address issues of law, not of fact, providing limited opportunities for a reversal of the original ruling. In Italy, the appeal is a full do-over. Witnesses are hauled back to the stand, judgments of opinion are freely questioned by the appeals judge and, most crucially, evidence is re-examined.

The critical finding in Knox’s appeal was made by a team of independent experts who ruled that the DNA evidence connecting her and Sollecito to the crime was too weak to satisfy basic international forensic guidelines. In the Italian system, the appeal is often perceived as an act of Christian mercy; it frequently leads to a reduction of sentence, if not a full acquittal. This gives the Italian system a flexibility than its American counterpart doesn't have.

Now Knox will be whisked into a uniquely American ritual: a private jet back to Seattle; a press tour; book and film contracts; engulfing paparazzi; an adoring fan base and death threats. Then the cameras will disappear and a nation will wait, bereft, until the next beautiful young woman is accused of murder. And Knox, gradually, will begin to live.

Nathaniel Rich covered the Knox case for Rolling Stone and is the author of the novel "The Mayor's Tongue."

Nathaniel Rich is the author of the novel "The Mayor's Tongue," and a contributor to Harper's, the New York Times, The Believer, Rolling Stone and many other magazines.